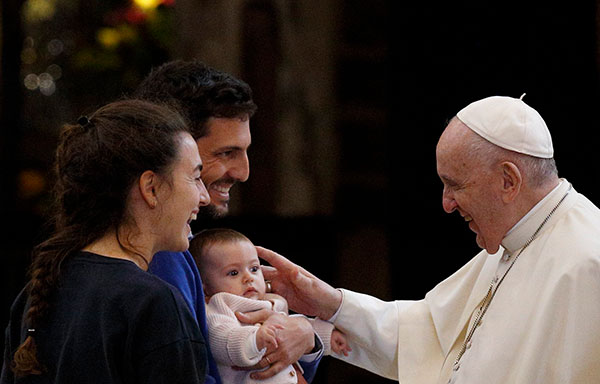 Here in Rome, where I teach a postgraduate course on the sites and history associated with the spirituality of Saint Ignatius of Loyola, the recent announcement of a consistory appointing new cardinals has of course dominated much of conversation in cafes and restaurants among Vatican-watchers. And while I have my own opinions and interpretations of some of the Holy Father’s decisions there, that’s not the only significant event in the Eternal City worth commenting on this month.

Pope Francis recently released a short video outlining his prayer intentions for June 2022. The clip is available at www.thepopevideo.org, a website coordinated by the Pope’s Worldwide Prayer Network. The pontiff asks the world to pray for contemporary families because “by being united in our differences, we evangelize by our example of life”. He notes that although there are no “perfect families”, we should never be afraid of making mistakes, and that “when we argue, when we suffer, when we are joyful, the Lord is there , accompanies us and helps us , and corrects us. This hope that every family in the world “incarnates and experiences unconditional love as the path to holiness in daily life” is at the heart of the X World Meeting of Families, which will take place in Rome at the end of the month.

You may remember the eighth WMF because it brought Pope to Philadelphia in 2015. My good friend Mary Beth Yount, a local professor at Neumann University in Aston, Pennsylvania, was the content and programming director for this papal event. We have collaborated on a number of projects and will be spending time together and planning other future initiatives together during the festivities in Italy this time around.

She has written extensively on the role of the family in Pope Francis’ ecclesiology. More than a mini-factory to produce potential future priests, however noble, the image of “domestic church” that is familiar to many of us to describe family life as a breeding ground for faith can be taken further: “The development of this image can translate a radical break with the Holy Spirit, the prophetic character of inspiration and the savagery that is relationality, communion and sacramentality. Both the family and the Church are “graceful and dynamic, visible and social embodiments in process” of God’s self-communication to the related human family. There is an unpredictable and developmental quality to our shared interrelationships and family ties, and their “undomesticated” tendencies and characteristics must inform how we are with each other, with God, and even with ourselves.

If our local parish setting is truly a “family of families,” as it is so often asserted, then we must continue to ponder the mystery that exists even in our closest inherited and adopted relationships. For example, although I can say that I know a lot about my parents, my spouse and my young child after countless hours spent with them during my life, it is part of the human condition that in a sense very real, they always remain a mystery to me in their pure otherness. We can never fully fathom the depths of another person, and it is in many ways the root of the dignity of his person which is the true imago Dei.

It also echoes our relationship with the transcendent, ineffable, uncontrollable God of the cosmos, who has chosen to come incomparably near to make us his sons and daughters in baptism, yet who remains utterly mysterious in a infinite and inaccessible. The danger of attempting to domesticate God (and each other in family life) lies in the vain attempt to put the Roaring Lion of Judah on a weekend trip to a petting zoo.

Top 5 places of worship near El Camino College to visit