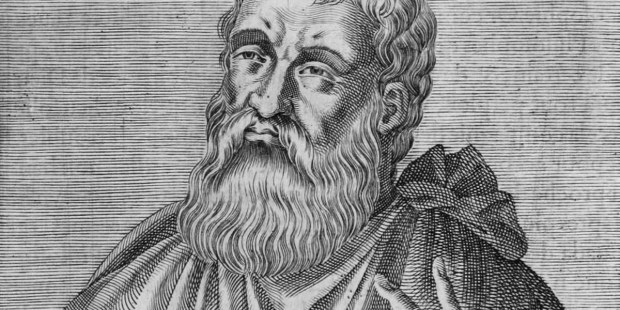 + Justin was born in Syrian Palestine and trained as a philosopher.

+ Justin finally accepted the Christian faith as the full expression of truth. He used his talents as a philosopher to defend Christian teachings and he holds a place of honor among the early writers of the Church.

+ In his writings, Saint Justin reveals his love of truth, understood as a way of life revealed by the incarnate Word of God.

+ The writings of Saint Justin contain some of the first teachings of the Eucharist:And this food is called among us Εὐχαριστία [the Eucharist] … For it is not as common bread and common drink that we receive them; but as Jesus Christ our Saviour, having been made flesh by the Word of God, had flesh and blood for our salvation, so we have been taught that the food which is blessed by prayer of his word… is the flesh and blood of this Jesus who became flesh.

+ Saint Justin was martyred in Rome around the year 165. He is honored as one of the patron saints of philosophers.

“I have tried to learn all the systems, but I have accepted the true doctrines of Christians, although they are not approved by those who are held back by error. – Saint Justin Martyr

On this day we also remember Blessed Leo Tanaka. A lay catechist in Nagasaki, Japan, he was martyred on June 1, 1617 near Omura and was beatified with other Japanese martyrs in 1867.

O God, who through the folly of the Cross
wonderfully taught Saint Justin the Martyr
the supreme knowledge of Jesus Christ,
grant us, through his intercession,
that, having rejected deceit and error,
we can become firm in the faith.
Through our Lord Jesus Christ, your Son,
who lives and reigns with you in the unity of the Holy Spirit,
one God, forever and ever. Amen.

(of The Roman Missal)

the catholic church rages against democracy