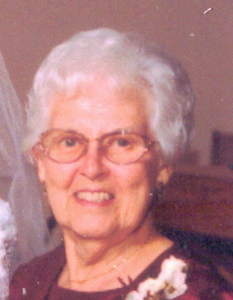 She married Michael J. Slofkosky on July 4, 1946 and from this union were born four children: Carolyn, Larry, Paul and Kenneth. Velma and Michael owned and operated Slofkosky Hardware in Lovilia from 1946 to 1970. Michael predeceased her in 1970. From 1975 to 1984 Velma worked at First Financial Savings and Loan in Albia where she became office manager . Velma married John Schleier on May 17, 1980 until his death on June 27, 1983. She then married Larry Mishler on September 5, 2003 and moved to Knoxville. He predeceased her in death on May 18, 2008.

Visitations will be held at the Sinnott Funeral Home in Albia, Iowa on Tuesday, January 11, 2022, opening to the public at 3:00 p.m., and Velma’s family will be present from 5:00 p.m. to 7:00 p.m. Tuesday evening at the Sinnott Funeral Home in Albia. A Christian burial mass will be celebrated at the Saint-Pierre Catholic Church in Lovilia at 10:30 am on Wednesday January 12, 2022. Interment will be in the Saint-Pierre cemetery in Lovilia. Due to the highly contagious Omicron variant, the family requires all participants to wear a mask and practice social distancing.

Memorials can be made at St. Peter’s Catholic Church, at the Welcome Home Memorial or at the Pella Comfort House Hospice. Services entrusted to Sinnott Funeral Homes and Crematorium.