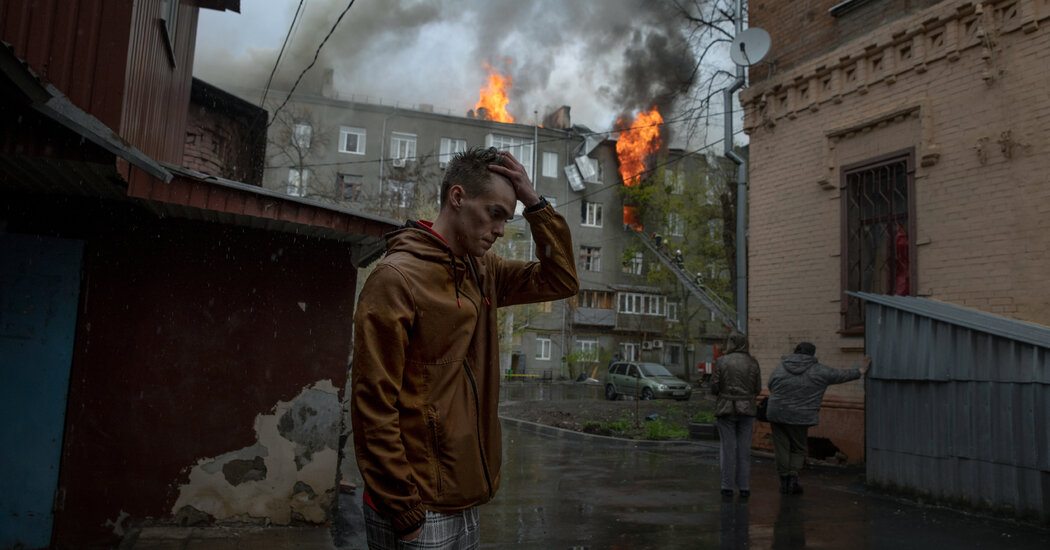 ROME — In what he described this year as a “War Passover,” Pope Francis addressed tens of thousands of worshipers in St. Peter’s Square about “fear and anguish” evoked by the conflict in Ukraine, adding that he hoped that news of the suffering in Europe would also make people more alert to similar situations elsewhere.

Francis celebrated coming out of two years of pandemic, during which he had delivered his Easter message under coronavirus restrictions, even as he recognized that the solidarity he had sought as a legacy of the crisis had not prevailed.

But it was the events in Ukraine that weighed the most on the annual “Urbi et Orbi” address (“To the city and to the world”). The country has been “severely tried by the violence and destruction of the cruel and senseless war into which it has been dragged”, Francis said. At these words, applause broke out in the square. “Let there be a decision for peace. May there be an end to flexing muscles while people suffer,” the pope added.

Peace was possible, a duty and everyone’s primary responsibility, Francis concluded, urging people to shout this message “from our balconies and in our streets” and world leaders to heed the call.

He also hinted at the specter of a potential nuclear conflict, citing a manifesto on the dangers of new weapons of mass destruction published by the philosopher Bertrand Russell in 1955 and signed by intellectuals and scientists including Albert Einstein: “Should we end the human race, or should humanity renounce war?

The message and benediction, given on Easter Sunday and Christmas Day, which traditionally includes calls for peace in conflicts around the world, were delivered after mass on the steps of the basilica. Some 100,000 people were present in the square, overflowing into an adjacent avenue, according to the Vatican. It was a far cry from the few hundred who attended the celebration last year.

The conflict in Europe, Francis said, should make people “more concerned about other situations of conflict, suffering and grief.”

He cited “years of conflict and division” in the Middle East. Just days after violent clashes between Palestinians and Israeli riot police in Jerusalem that left 150 injured, Francis prayed that “Israelis, Palestinians and all those who inhabit the Holy City, together with pilgrims, make the experience the beauty of peace, live in fraternity and enjoy free access to the Holy Places with mutual respect for the rights of each”.

Francis called for peace in Libya so that it can regain “stability after years of tension”, and for Yemen, “which suffers from a conflict forgotten by all, with continuous casualties”. He called for an end to “hate and violence” in Myanmar and cited the “tragic humanitarian crisis” in Afghanistan “bringing great suffering to its people” as well as struggles in African countries.

“We have seen only too much blood, too much violence. Our hearts too have been filled with fear and anguish as so many of our brothers and sisters have had to lock themselves in to be safe from the bombings,” he said.

francis pleaded last week for an Easter truce in Ukraineand he frequently called for an end to the war, which he denounced as blasphemous and an “outrage against God”. His comments did not name Russian President Vladimir V. Putin, an omission that drew criticism, although during a visit to Malta this month, Francis blamed the war on an “unfortunately caught potentate”. in anachronistic claims of nationalist interests”. .”

The pope has repeatedly called for humanitarian corridors, as well as sending emissaries – two of his closest aides – to Ukraine to show his closeness to the Ukrainian people, and he said earlier this month- here that he could go to kyiv himself.

On Sunday, he said he carried in his heart the “many Ukrainian victims”, referring to “the millions of refugees and internally displaced people, the families divided, the elderly left to fend for themselves, the lives shattered and the cities razed to the ground. “. .” The faces of orphaned children fleeing war in Ukraine, he said, reflect the same pain as “those other children who suffer around the world: those who die of starvation or lack of medical care, those who are victims of abuse and violence, and those who are deprived of the right to be born.

The Easter message is a message of peace, Francis said, adding that it is especially welcome in circumstances like these. “Let the peace of Christ come into our lives, our homes, our countries,” he said.

For many, Easter Sunday marks a return to in-person worship

Could this book prevent Catholics from leaving the Church? find how