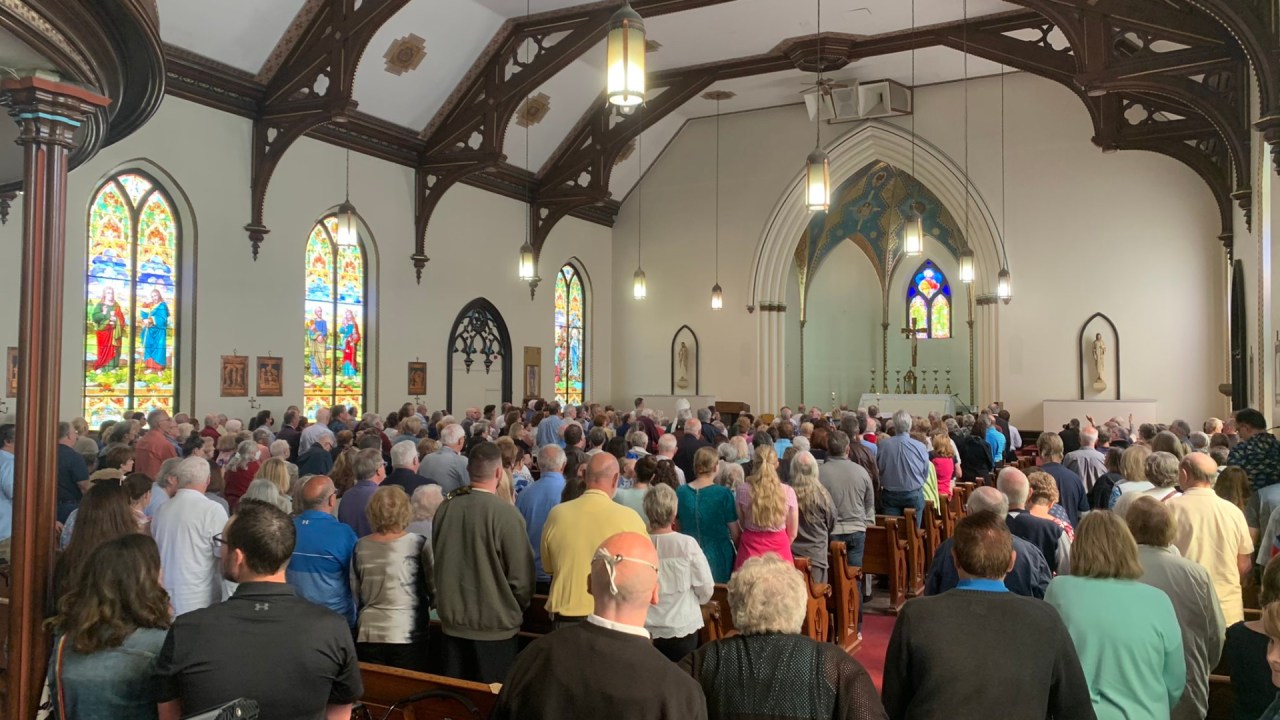 It was the first service there in more than two years and a final farewell to a church that has marked the lives of parishioners for a century and a half.

“We are praying for all who have worshiped here and lived the important moments of their lives here,” Bishop of the Catholic Diocese of Grand Rapids, David Walkowiak, told a large gathered group.

The first mass was celebrated in 1872, shortly after the building was completed.

“There have been a lot of memories here,” said Mike Schichtel, who attended Tuesday’s final mass. “We were all baptized here. Many of us got married here. We buried our parents here.

“I went to school here for eighth grade,” parishioner Miles Schmidt said. “Baptized here. My mother was baptized here probably around 1914. My mother and father were married here.

“It’s just a beautiful church,” Schichtel said. “I’m sorry to see that it will no longer be available. I’m just glad our family had the opportunity to share it one last time.

It was a moving final comeback. Many worshipers were in tears as they said goodbye.

“I’m sad, very sad,” said Mary Versluis. “A lot of sad memories and good memories, though. They will be with me.

Versluis said the service was “incredible”.

“To see so many people come to worship this last Mass, there are so many memories here,” Versluis said.

Since the church closed two years ago, mass has been held a few blocks away at St. Adalbert’s Basilica. Hutchinson said Saint James had too much structural damage for services to continue, citing an assessment from the insurance company.

“(There are no) usable stairs,” Hutchinson said. “They are collapsing. They don’t have proper handrails on them. They all need to be fixed. There are many structural problems.

“Outside there is an enormous amount of cracks all over the foundation and up to the tower,” he added. “There have been leaks that have happened, so pieces of this are either disappearing or starting to get ready to fall out.”

Hutchinson said pieces of the building collapsed three years ago.

“We literally had a piece come out, and thank God it came out when no one was in the building,” Hutchinson said.

He added that attendance has been declining for years.

“If we had this number of people here every weekend, I wouldn’t be dealing with what we’re dealing with right now,” he said. “I thought, ‘My God, why can’t it be like this every day, my God? Why can’t we have this all the time? »

The property will go on the market next week. The benches will either be sold or donated. Hutchinson said anyone who buys the stained glass windows will be required to preserve them.

There was not an empty seat in the church on Tuesday. As the Bishop addressed the congregants, he said “there is indeed sadness today, that’s for sure.”

“We feel the same kind of sadness when we leave our house and go to a new house,” Walkowiak said. “We are full of hope, but we are nostalgic for all the experiences and good memories that we will leave behind. But we should give thanks today for those memories and for the way God has worked in this family of faith.

Outside the church there is a garden created in honor of churchgoer Mary ‘Mitzie’ Seward, who died of cancer aged 32 in 1986. She was a young mother. His sister, Diane Kreslins, told News 8 that the garden was not maintained while the church was closed.

Hutchinson said the tribute will be part of the sale. He said they tried to move it to another church, but since it was cement it would have cost too much.

The garden is one of the many memories of the Saint-Jacques church, a place of worship for generations.

“I want to remind people that all of those memories still exist in their hearts,” Hutchinson said. “All those things that are really important are still there.

The suspension of ordinations in France an unprecedented surprise