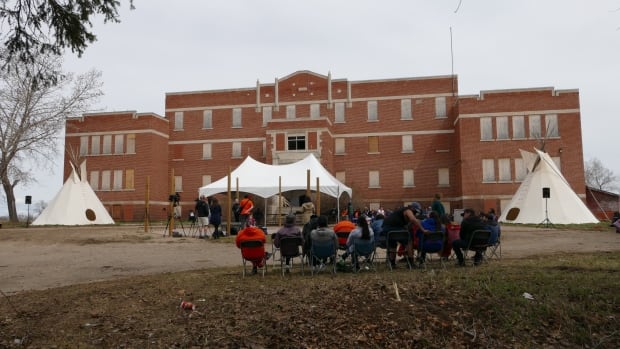 The Muskowekwan First Nation formally requests that Pope Francis include a stop at the last remaining residential school in Saskatchewan on his next visit to Canada.

Members of Muskowekwan — located more than 100 km northeast of Regina — made the request at a news conference Monday.

“We have a hope and a prayer that the Pope will eventually come and visit us in Muskowekwan,” said Muskowekwan Chief Jamie Wolfe.

“Hearing those words of forgiveness would be life changing for some who still believe that way, in that culture. I wouldn’t want to watch something like that on TV. I would want the person here in person to come over and say sorry for what you had to endure in this school.”

Thirty-five potential unmarked graves have been discovered at the former site of the Muscowequan Indian Residential School.

The school was operated by the Roman Catholic Church until the federal government took over in 1969. Built in 1930 and 1931, the school recently became a National Historic Site after a campaign by members of the community who consider it an important site that bears witness to the history of residential schools

On Monday, the First Nation was joined by Donald Bolen, Archbishop of the Roman Catholic Archdiocese of Regina, and Marie-Anne Daywalker-Pelletier, who was part of the First Nations delegation from Canada who met with Pope Francis at the Vatican in March.

Last month, the FSIN asked the pope to visit the Saskatchewan residential school graves during his planned trip in July. This request was again taken up on Monday.

“We had told them, you come to our area, our traditional lands, where there is a big permanent school here in Muskowekwan and where that means, where that means something to people,” the FSIN leader said, Bobby Cameron.

Cameron has previously said the pope owes each community and alumnus of a Catholic school an apology in their own sovereign territory.

On Monday, Cameron said the pope should visit First Nations in Saskatchewan to witness the reality, impact and legacy of residential schools.

The Sunday Review21:28Canadian archbishop’s hopes for reconciliation ahead of historic papal visit

Five years ago, Donald Bolen, the archbishop of the Roman Catholic Archdiocese of Regina, was part of an effort to bring Pope Francis to Saskatchewan, to apologize for his role in Canada’s residential school system. He is also one of six members of the Canadian Conference of Catholic Bishops to visit the Vatican, along with an Indigenous delegation this week. Bolen speaks with Piya Chattopadhyay about his hopes for the delegation, why he thinks Canada may soon see a formal apology from Pope Francis, and how Canadian bishops are embarking on a new era of reconciliation. 21:28

“It would be a beautiful and powerful thing,” he said, but admitted he only had a small role and wasn’t sure it would happen.

Bolen praised the good work being done in the community and efforts to heal and move on from the traumatic legacy of residential schools.

“We not only understand the legacy of racism, but also how racism continues in our society today,” Bolen said.

While visiting Rome, Daywalker-Pelletier presented Pope Francis with baby moccasins in exchange for a promise for him to put them back on the steps of a boarding school in his area.

She said she planned to hold the pope to account and wondered if the planned papal visit was just a reward for those “indigenous people who still practice the faith, rather than a sign of reconciliation.”

Daywalker-Pelletier asked the Canadian Conference of Catholic Bishops (CCCB) to use its influence to have the pope visit the school.

“The permanent residential schools in Canada, like the concentration camps of Dachau, Auschwitz-Birkenau and other Holocaust sites in Europe, are our proof of Canadian history and a visit from the Holy Father is a real sign of the commitment that the Catholic Church will never again participate in this type of action,” she said in a statement released before the start of the press conference.

There were 22 residential schools in Saskatchewan, where tens of thousands of First Nations children were forced to attend. At least half were run by the Catholic Church.

Pope Francis is should visit Quebec, Edmonton and Iqaluit during a trip to Canada at the end of July.

Support is available for anyone affected by their residential school experience and for those triggered by the latest reports.

A National Indian Residential Schools Crisis Line has been established to provide support to former students and those affected. People can access emotional and crisis referral services by calling the 24-hour national crisis hotline: 1-866-925-4419.