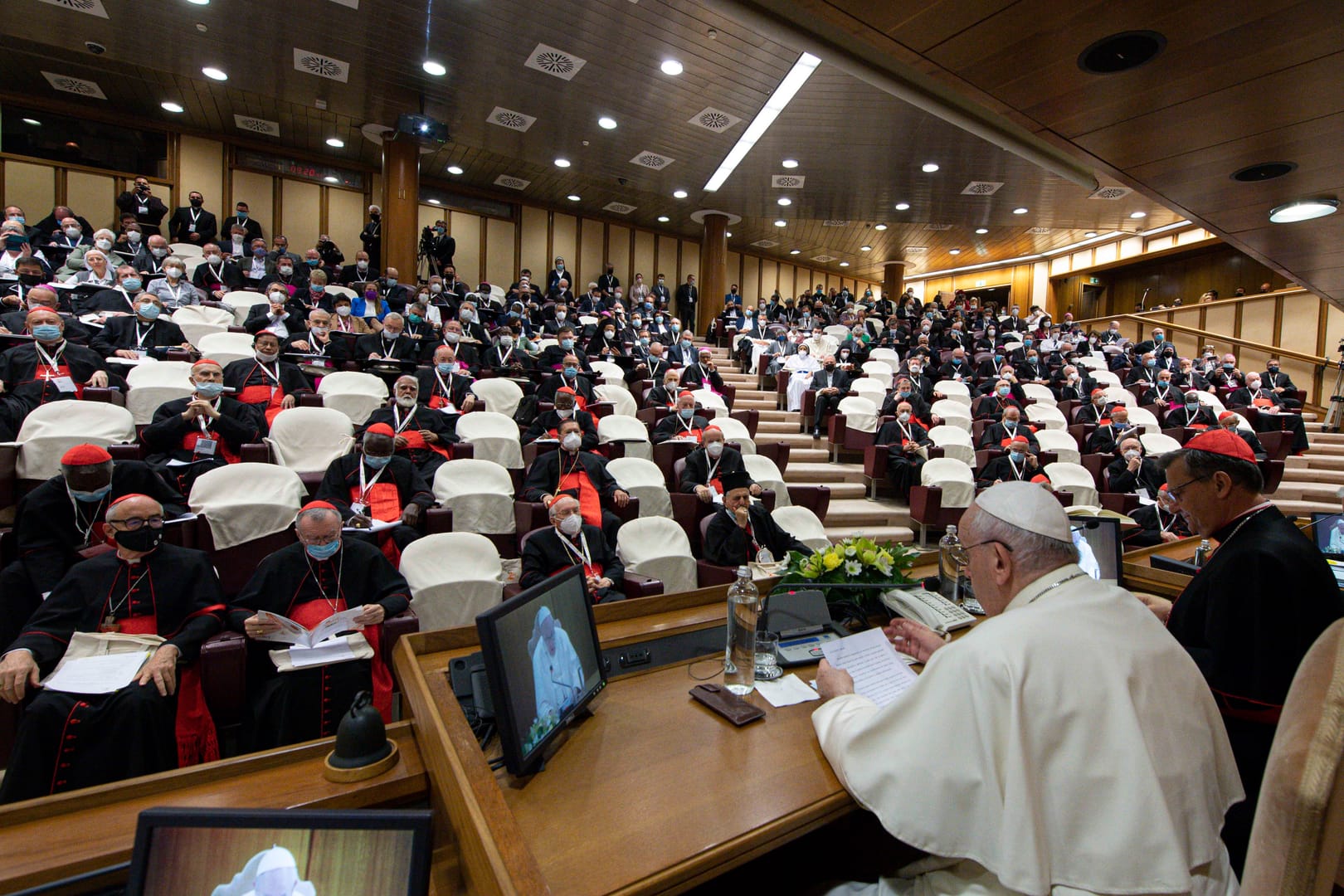 Experts debate the meaning of ‘synodalism’ for the global church

ROME – Throughout the month of July, some 100,000 people will be able to participate in a free online seminar on synodality, organized by three theologians from Latin America, but including witnesses from around the world.

“Common Discernment and Decision-Making in the Church” is the theme of the first in a series of courses to be organized by the School of Theology and Ministry at Boston College, sponsored by the Episcopal Conferences of Latin America, d Europe and Asia, as well as Jesuits in Latin America and organizations of superior generals of male and female religious congregations.

Six members of a long list of speakers answered questions related to the chosen topic and sent them to Crux, for a sample of what those who will participate in the course will learn. The initiative aims to help Catholics understand the concept of synodality, ahead of the Synod of Bishops on Synodality, which was opened by Pope Francis last October and will end in October 2023, when prelates from around the world will meet in Rome.

RELATED: Synod on Synodality Will Be a ‘Process of Spiritual Discernment’, Attendees Say

Here are the questions each received, tailored to their presentations, and what they had to say. The list includes lay theologians – men and women – nuns and priests. They come from Africa, Asia, Europe and Latin America.

Node: What role does conflict play in a synodal church?

Synodality also makes room for fresh and productive thinking about conflict and disagreement in the Church – in a way that does not understand conflict as an “extraordinary” occurrence in a Church that is “normally” in unity. . Instead, within a synodal church, conflict can be approached as a challenging but fruitful way to arrive at a deeper vision of the church’s identity and mission in the world. Synodality is a dialogical process of patient and mutual listening between and through all levels of the Church which aims to enable the Church “to listen to God, so that with him we may hear the cry of his people ; listen to his people until we are in harmony with the will to which God calls us.

Such listening does not provide unambiguous information about God’s will, but is a shared effort to discern God’s will for God’s creation, here and today.

As Pope Francis has pointed out, such a process of discernment is not free from controversy and so he has encouraged theologians to explore contentious issues as part of the journey to discerning what the Spirit is saying to God. Church in this place. Synodal ecclesiology, in other words, makes room for disagreement and conflict in the theological conception of the Church.

In this context, we can understand that the conflict has a quality of revelation – to enable us to discern something authentically new about the Church, the world and God, as Pope Francis beautifully expressed in Querida Amazonincluding when he said that conflict resolution is not simply about finding out who is right and who is wrong, but that the way forward should rather be to “transcend the two approaches and find other better ways, maybe not even imagined yet. The conflict is overcome on a higher level, where each group can join the other in a new reality.

Speaker: Sister Josée Ngalula, from the Democratic Republic of Congo

Conference: Women’s Leadership and Governance in the Church

Node: What are the difficulties encountered by women in the African Church, which must be changed?

Three essential difficulties facing African women in Africa must be changed urgently: financial insecurity, the cultural trivialization of violence when it is a woman who is the victim, sexual abuse at work, in the ecclesial milieu as well as in situations of insecurity and war.

Can you share some key concepts from African theology that can help to understand and better receive synodality?

I can think of several, but allow me to share three: Ecclesiology of “the Church as Family of God and Brotherhood (Church Family of God-Brotherhood)”, the African palaver as a space where the priority is to let absolutely everyone express themselves; the “ubuntu” vision, where living on earth means walking together.

Speaker: German Gregor-Maria Hoff, professor of fundamental theology and ecumenical theology at the University of Paris Lodron in Salzburg

Lecture: Power in the Church

Node: How do we define power in the Church and what do you think needs to change?

The Church is the space in which the unlimited creative life force of God must be exercised. It is the beginning of and in everything. Jesus Christ embodies it: in his life, in his message of the kingdom of God – and he continues to function as a power of faith and life in the church if and as long as he gives signs of life. It is on this that the power of the Church depends, on this it is measured.

Everything that is mortal must be transformed into new life options. Transformation, therefore, not only in the Eucharist, strikes at the heart of what the Church is. Concretely, this means that where the Church does not function as a space in which God’s creative life power can be experienced, it must change. This particularly concerns the possibility for all the baptized to participate responsibly in such processes of transformation.

How can the German synodal way contribute to the synod on synodality?

The German synodal path begins with an experience determined by the power of the Church: the sexual and spiritual abuse of people. It has systemic reasons that are deeply tied to how power is vested in the Catholic Church: holy potestasas sacred power.

Power must be controlled in its use – this also applies to the church. Transparency at all levels of ecclesiastical decision-making is therefore more than a simple technique or a change of functions. It is about the deep spiritual experience that the charisms of all the baptized need space in the church in order to eliminate false concentrations of power. We need a global distribution of powers: spiritual, institutional, but also epistemic. The Synodal Path practices such a division of powers – as an experience it can have an impact on the Church. It is already obvious: the subjects and problems which are negotiated on the Synodal Way do not only concern the Church in Germany. The future of the Catholic Church depends on her seeing herself as truly synodal.

Conference: Models of discernment in Asia

Node: What are the key elements that should be present in a community discernment process?

An important element is our inner freedom to seek God’s will together. Although each person must certainly express their true desires and concerns in a dialogue, it is necessary to move from “me” to “we” so that we let go of our own attachments and sincerely ask, “What is the Holy Spirit ? reveal to the whole community? What is best for the common good? Only then do we truly discern as a community.

What are the challenges and opportunities for building a synodal church in Asia?

Basic issues related to livelihoods, education, health and security remain a major concern, even a daily struggle for many people in Asia. They do not normally think of synodality or co-responsibility for the mission of the Church. However, this challenge can also be an opportunity.

Many local leaders have found ways to bring people together to meet these basic needs, with everyone playing a role and reaching out to the most vulnerable. This was particularly evident during the Covid pandemic. The Church must build on this momentum in partnership with others.

Node: Why is a synodal institutional model for the Church not comparable to democracy or parliamentarism?

Decision-making in the Church does not respond to political programs but to listening to the will of God here and now. It is not self-referential. The norma [norm of norms] is the Gospel of Jesus Christ, already given, and not a Constitution to be agreed upon. Democratic deliberation is for us synodal discernment: what the Spirit says to the Churches. A synodal institutional model is not based on antagonistic but community logics.

What can we learn from contemporary systems of political organization that help in church reform?

Node: Why speak of a reform in the Church?

In the document on ecumenism, the Second Vatican Council recalls an expression of Paul VI formulated in 1964: “as an earthly and human institution”, the Church is called by Christ to “eternal reform”.

Therefore, the renewal of people and the reform of the institution must be thought of as permanent tasks. Each generation of believers has the responsibility to carry out this “perennial reform” by letting themselves be guided by the Gospel and its tradition on the one hand, and by the signs of the times on the other.

How can synodality contribute to ecclesial reform and what dimensions does it include?

The synodal process represents a kairos for a renewal of the whole life of the Church. It includes a personal conversion of each believer and, at the same time, a reform of the structures, of the various ways of proceeding in the various diocesan, national and universal authorities. In the task of renewal, one or the other aspect should not be chosen, personal spiritual conversion or institutional reform. Nor should we promote one aspect first and leave the other for later.

It is necessary to promote both personal changes and institutional and even legal transformations. This is the only way to achieve profound renewal and effective and lasting reform. In particular, the principle of responsibility, which describes a form of governance and leadership adapted to our time, calls for profound adjustments in the ways of proceeding at all levels of the life of the Church.