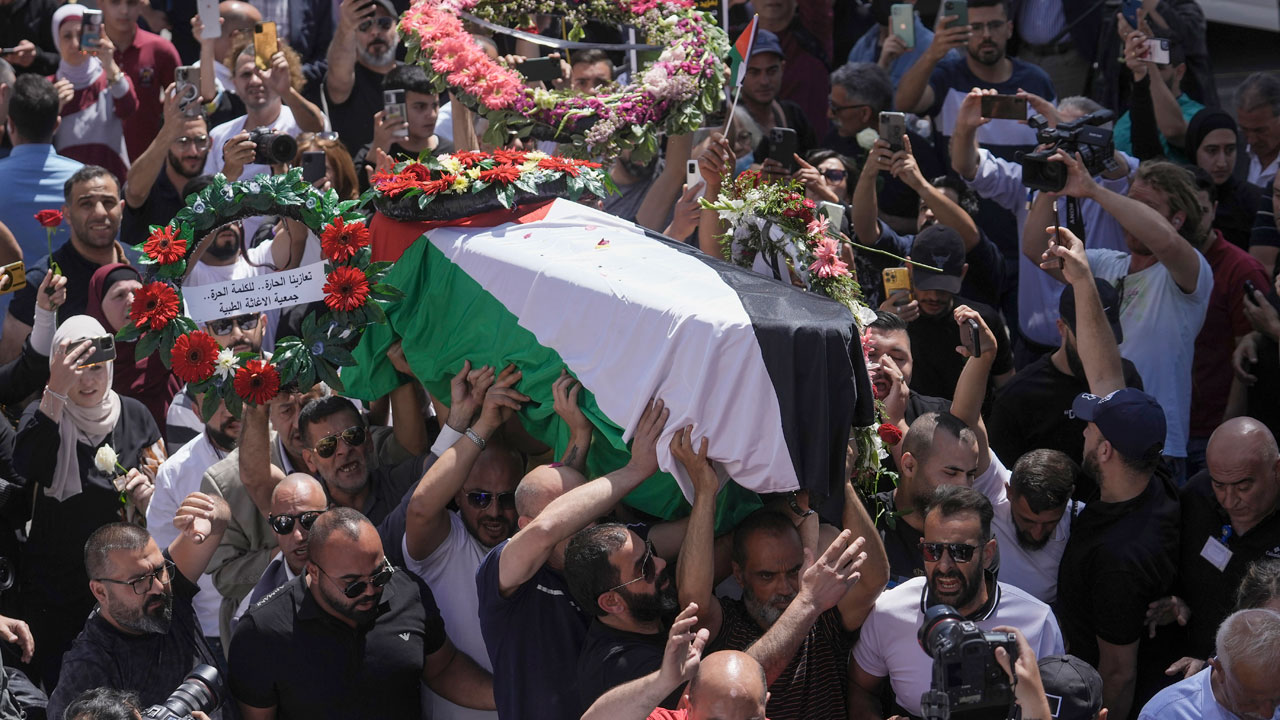 The Holy Land’s top Catholic cleric on Monday condemned the beating by police of mourners carrying the coffin of Al Jazeera journalist Shireen Abu Akleh on Monday, accusing the authorities of violating human rights and missing of respect to the Catholic Church.

Latin Patriarch Pierbattista Pizzaballa told reporters at St. Joseph’s Hospital in Jerusalem that Friday’s incident, broadcast worldwide, was a “disproportionate use of force” against a large crowd of people waving Palestinian flags as they drove from the hospital to a nearby Catholic church. in the Old City of Jerusalem. The attack drew worldwide condemnation and added to shock and outrage over the death of Abu Akleh, who was killed while covering a shooting in the occupied West Bank.

The police attack, Pizzaballa told reporters, “is a serious violation of international norms and regulations, including the fundamental human right of freedom of religion, which must also be respected in a public space.” Leaders and clergy from other Christian churches sat nearby.

There was no immediate Israeli response.

Israel and the Palestinians are locked in a war of stories over the murder of Abu Akleh. The journalist, a Palestinian-American, Catholic and veteran of the satellite channel for 25 years, was shot dead on Wednesday while covering an Israeli military raid in the Jenin refugee camp. She wore a blue vest clearly marked “Press”. Abu Akleh was a household name across the Arab world, known for documenting the hardships of Palestinian life under Israeli rule.

Palestinian officials and witnesses, including journalists who accompanied her, say she was killed by army fire. The army, after initially saying Palestinian gunmen may have been responsible, later backtracked and now says it is unclear who fired the fatal bullet.

The United States and the United Nations are among many critics of police repression at funerals.

Israeli police said they agreed funeral arrangements with Abu Akleh’s family in advance, and that a crowd of mourners violated that agreement by walking with the coffin, instead of driving with it, and by shouting nationalist slogans.

But Abu Akleh’s brother Anton disputed these claims. He said Monday that the family had entrusted the funeral arrangements to the Israel Police.

He said the police did not want Palestinian slogans or flags. But he said ‘it’s something we can’t control’.

Anton said the police also wanted to know the funeral itinerary and there was no other agreement. “We wanted to put the coffin in the car,” he said. “We were going towards the car when they attacked us.”

Israel Police have launched an investigation into the conduct of the officers who attacked the mourners, nearly knocking the coffin off the pallbearers. Israel’s public broadcaster Kan released what it said was security camera footage showing police bursting into the hospital ahead of the funeral.

Meanwhile, Israel and the Palestinians continued to argue over the shooting investigation.

Israel searched for the bullet, saying it must be analyzed by ballistics experts to reach definitive conclusions. Palestinian officials refused, saying they did not trust Israel. Rights groups say Israel has a poor record of investigating wrongdoing by its security forces.

After earlier saying they would accept an outside partner, the Palestinians said late Sunday they would handle the investigation on their own and deliver results very soon.

“We also refused to have an international investigation because we have confidence in our abilities as a security institution,” Prime Minister Mohammed Shtayyeh announced. “We will not hand over any evidence to anyone as we know these people are capable of falsifying facts.”

Amid the wrangling, several research and human rights groups have launched their own investigations.

Bellingcat, an international consortium of researchers based in the Netherlands, has published an analysis of video and audio evidence collected from social media. The material came from Palestinian and Israeli military sources, and the analysis looked at factors including timestamps, video locations, shadows, and forensic audio analysis of the shots.

The group found that while gunmen and Israeli soldiers were both in the area, the evidence supported testimonies that Israeli fire had killed Abu Akleh.

“Based on what we were able to examine, the IDF (Israeli soldiers) were in the closest position and had the clearest line of sight to Abu Akleh,” said Giancarlo Fiorella, the lead researcher for the IDF. analysis.

Fiorella acknowledged that the analysis cannot be 100% certain without evidence such as the bullet, the weapons used by the army and the GPS positions of the Israeli forces. But he said the emergence of additional evidence generally bolsters preliminary conclusions and almost never invalidates them.