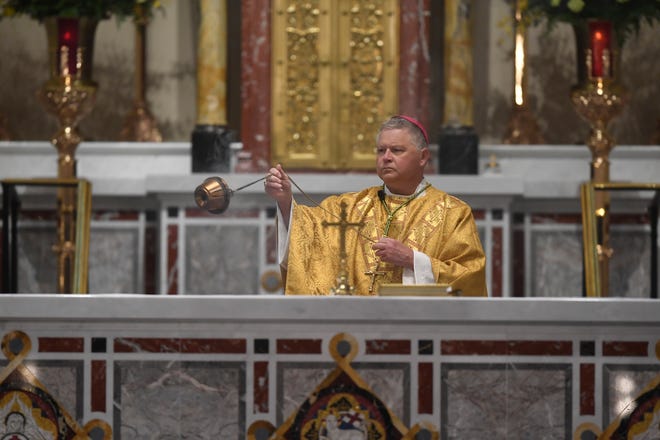 An anonymous plaintiff is suing the Roman Catholic Diocese of Knoxville and its bishop, alleging the diocese failed to properly investigate allegations of sexual abuse against a former employee.

The lawsuit, filed Tuesday in Knox County Circuit Court, details several instances of sexual harassment and abuse that the plaintiff said he suffered. It also makes several allegations that the bishop went too far in investigating allegations of abuse, using information reported last year by a news agency.

The plaintiff was unaware of the Diocese’s “conspiratorial and conspiratorial efforts to cover up his involvement in his sexual abuse” until The Pillar, a Catholic news agency, published stories about the Diocese in early last year, according to the lawsuit.

“The diocese expects the process to be fair and thorough and looks forward to the opportunity to vigorously defend itself should this matter progress,” Wogan said.

The two law firms representing the plaintiff, known as John Doe in the lawsuit, also argue a case against the Catholic Diocese of Nashville alleging the diocese mishandled reports of abuse at a parish in Murfreesboro.

The man who carried out the abuse at Murfreesboro Parish, Michael D. Lewis, pleaded guilty last week to four counts of statutory rape, concluding the criminal case. The lawsuit against the Diocese of Nashville is ongoing.

Lawsuit against the Diocese of Nashville:New lawsuit alleges Catholic Diocese was ‘negligent’ in addressing abuse at Murfreesboro Parish

The 46-page complaint against the Diocese of Knoxville devotes 10 pages to alleged abuse by a diocesan employee against the plaintiff. According to the lawsuit, the abuse occurred in 2019 when the plaintiff was a musician at the Cathedral of the Sacred Heart of Jesus in Knoxville, and when the former employee worked as an assistant at Stika, a job that involved traveling to different parishes.

The plaintiff alleges he was subjected to a grooming regimen and details a case on February 5, 2019, when the plaintiff said the former employee raped him, according to the lawsuit.

Following subsequent instances of harassment, the former employee wrote a letter to the plaintiff on February 14, 2019, according to the lawsuit. The lawsuit included a copy of the letter.

“And for what was wrong – I apologize with all my heart,” the letter read, according to the lawsuit.

The complainant sought to file a rape report with the Knoxville Police Department on February 25, 2019, but was ultimately deterred after an officer told the complainant that “the church would come after” the complainant, the lawsuit argues.

“The KPD has no comment. We have searched our records and have no way of verifying whether an officer spoke with the complainant in the lawsuit,” the Knoxville Police Department spokesman said Wednesday. Scott Erland, in a statement.

One of the plaintiff’s lawyers, Patrick Thronson, said in an interview Wednesday that he was not aware of any criminal investigation related to the case. Additionally, Thronson’s client is not pursuing a civil suit against the former employee of the Diocese.

Failure to name the former employee as a defendant in the lawsuit “certainly is not an indication that we believe he is not responsible,” Thronson said. Thronson, a Baltimore-based attorney, is arguing the case with Nashville-based attorney John Spragens.

The diocese hired an outside consultant to investigate the allegations, which Stika replaced midway through the investigation because the initial investigator was “confusing” with the questions he was asking, Stika told The Pillar. , according to one article.

Replacement investigator Chris Manning told The Pillar he only interviewed the former employee and not the complainant, according to the lawsuit.

Despite official statements from Stika and Manning, The Pillar repeatedly cited unnamed sources in its reporting on the controversy last year.