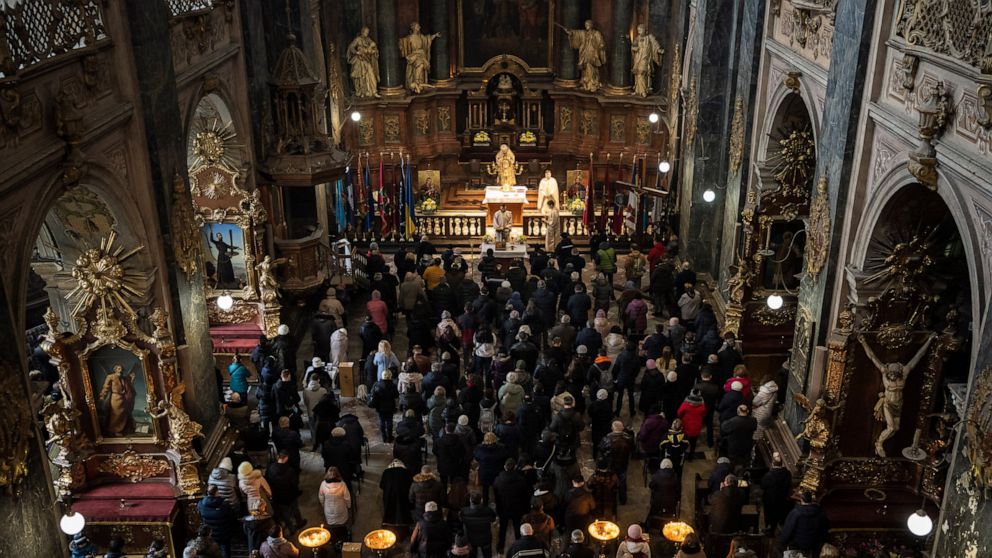 LVIV, Ukraine — With hands clasped in prayer and faces filled with fear and sadness, some Lviv residents sought consolation during a Sunday mass at a Catholic church in the western Ukrainian city.

The 17th century church was silent during the ceremony, reflecting the moment charged with emotion and concern over the ongoing Russian invasion.

Some people in the church were holding small papers with the names of their relatives written on them. Others simply stood in silence with their heads bowed during prayer.

Built by Jesuit missionaries, Saints Peter and Paul Garrison Church in Lviv was damaged during World War II and served to store over 2 million books during the Soviet era.

Since its reopening in 2011 after renovation, it has served as a military church, offering prayer and consolation to Ukrainian military personnel.

During the last 11 days of the Russian invasion, the church became more important than ever, even though Lviv itself did not experience intense bombardment and destruction like other cities in the country.

Reverend Taras Mykhalchuk explains that “because the church is the garrison church, the priests who preach here are military chaplains.”

“First of all, over the past eight years, we have tried to help the army above all spiritually, to pray with them and to fulfill all our duties as priests,” he said.

Unable to be with the troops on the ground due to the intense fighting, the priests are also trying to offer consolation to those who have been left behind and need comfort more than ever, Mykhalchuk said.

“We are increasing the amount of prayers and we are praying,” he said. “We have to understand that with our military, we are on our land.”

Inside, the light from dozens of candles flickered, illuminating the faces of praying men and women.

In one corner, a memorial with dozens of small photos is displayed for fallen Ukrainian soldiers who have lost their lives since the 2014 clashes. Men and women wearing military uniforms could be seen among those attending the service .

In a separate room, donated clothes, sleeping pads and relief materials were stored, waiting to be distributed if needed.

Mykhalchuk is certain that Ukrainian soldiers are “led by love and light” to defend their country.

“Love is a very strong feeling and it is stronger than death,” he said. “God is a fair judge and I think very soon everything will be put back in its rightful place.”

Follow AP coverage of the Russian-Ukrainian War at https://apnews.com/hub/russia-ukraine