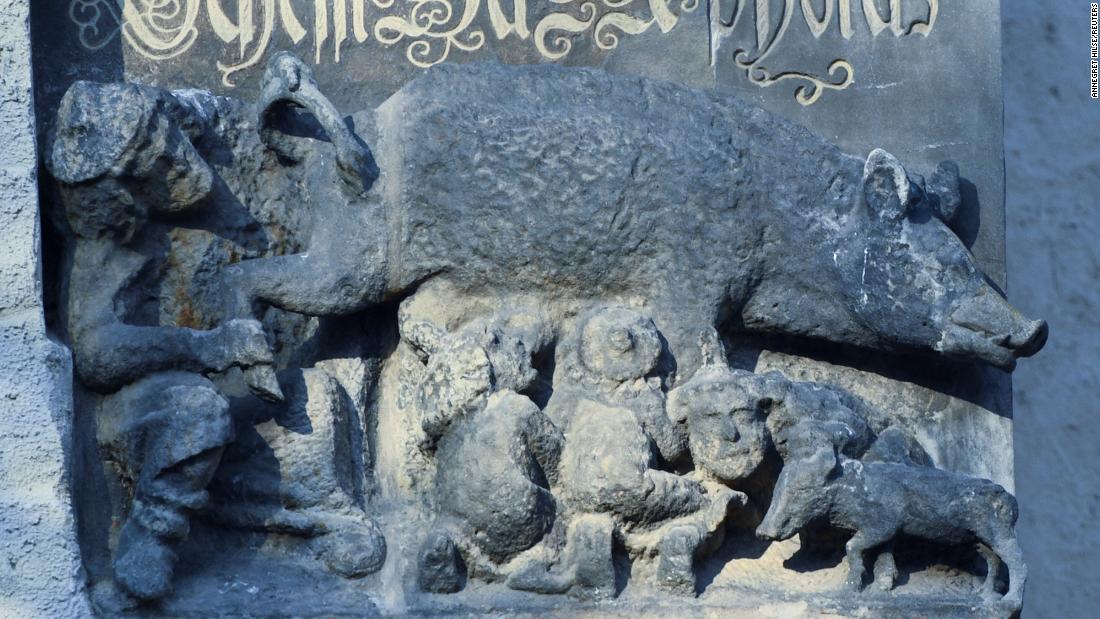 Germany’s highest appeals court has ruled a medieval sculpture can remain outside a church in Wittenberg, eastern Germany, despite acknowledging it was anti-Semitic .

The sandstone sculpture, which has been part of the exterior of Wittenberg Stadtkirch – or city church – since around 1290, depicts two people identified as Jews by their pointed hats suckling a pig – considered unclean in the Jewish religion. Another man, a caricature of a rabbi, lifts the pig’s tail and looks behind his back.

The case was brought by Michael Dietrich Düllmann, a 79-year-old retired psychiatric nurse who converted to Judaism in the 1970s. Düllmann has long campaigned for the removal of the “Judensau” or “Jew Sow”, which he considers not only offensive but “dangerous” at a time when politicians are warning of rising anti-Semitism in Germany.

Wittenberg is the birthplace of the Protestant Reformation and where Martin Luther nailed his 95 Theses to the door of a Catholic church in 1517. In 1570, the inscription “Rabini Shem HaMphoras” — an absurd phrase which, according to the court, was based on an anti-Semitic text by Luther — was placed above the sculpture of the sow.

Düllmann has been fighting a legal battle for years to remove the sculpture, which sits about 13 feet off the ground.

But on Tuesday, the Federal Court of Justice upheld lower court rulings that dismissed the case, saying there was no breach of law.

He acknowledged the nature of the sculpture was offensive until November 1988, when a bronze plaque was installed as part of the commemoration of the 50th anniversary of Kristallnacht, when the Nazis burned down and destroyed Jewish property across Germany.

Luther’s writings and other examples of anti-Jewish sentiment in Germany through the ages are mentioned on the plaque, in addition to a reference to the 6 million Jews killed in the Holocaust.

Speaking by phone from Bonn, Düllmann said the court’s decision was an “understatement of the real danger” of the sculpture.

“You can’t neutralize it just by putting a simple plaque next to what it means,” he told CNN, adding that such “propaganda” can be found in more than 30 churches across the country. Germany today.

“The Judensau is not just an insult, it’s much more than that – it’s a call to murder Jews,” he said.

“No institution outside the church, and no person outside of Martin Luther, did more to prepare the German people for Auschwitz. Auschwitz did not come out of a vacuum. It was the result of an agitation secular against the Jews.”

He said the rising level of anti-Semitism is a “real danger” in Germany today and far-right protesters have appeared at every hearing he has had so far.

“I am very concerned about the situation here and I think intellectuals and politicians are underestimating the dangers. They are ready to make concessions to the right.”

Determined to continue, he added: “It is my will to go to the Constitutional Court and keep fighting and if I lose I will go to the European Court of Human Rights in Strasbourg.”

Josef Schuster, the president of the Central Council of Jews in Germany, said on his organization’s website that the decision was “understandable”, but added that “neither the baseplate nor the explanatory tilted display contains a unambiguous condemnation of anti-Jewish work of art.”

He said: “The church community in Wittenberg and the churches as a whole must find a clear and appropriate solution to deal with anti-Jewish carvings. The defamation of Jews by the churches must once and for all be a thing of the past.