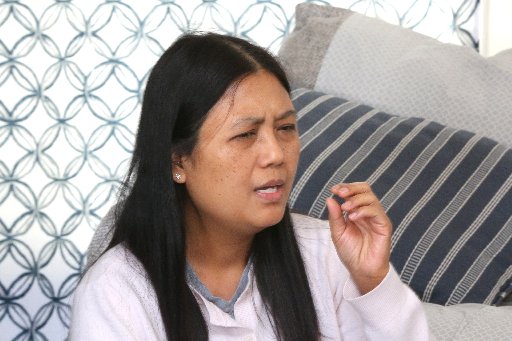 BOWLING GREEN, Kentucky — Angela Chit Htwe knew the only thing she could do was pray after tornadoes killed several of their neighbors and severely damaged her family’s home.

“I went to church by myself and prayed. I thanked God for being alive and prayed for everyone who died,” said Chit Htwe, who speaks Burmese and spoke through an interpreter for an interview with The Western Kentucky Catholic. , newspaper of the Diocese of Owensboro.

Chit Htwe and her husband, Andrew Si Thu, came to Kentucky as refugees from ongoing political unrest in their home country of Myanmar, formerly known as Burma, which has struggled with internal conflict for decades. decades. A military coup in February 2021 overthrew the elected government.

Settling in a Bowling Green housing estate and surrounded by neighbors who had come to the United States as refugees and immigrants themselves, Chit Htwe and Si Thu felt it would be a safe place to raise their two daughters.

At the same time, husband and wife frequently experienced internal conflict between Chit Htwe’s beliefs as a devout Catholic and Si Thu’s beliefs as a Buddhist with a strong bias against Catholicism.

Chit Htwe belongs to the Holy Spirit parish in Bowling Green, the seat of the Burmese Catholic ministry in the diocese. Participating in his parish has always been important to Chit Htwe, but Si Thu was unsupportive at best and antagonistic towards his faith at worst.

The family’s life was torn apart when a series of tornadoes ripped through western Kentucky on the night of December 10.

While their family was spared, they lost half of their roof and later learned that their neighborhood had seen the most deaths in Bowling Green.

Tragically, they found out on TV news that their daughter’s best friend’s entire family had died in the storms.

“I had never experienced a (natural) disaster in my life,” said Chit Htwe, adding that at first, “I didn’t know how to react.”

She decided to go to the Holy Spirit Church to spend time in prayer before the Blessed Sacrament.

But after Chit Htwe returned home, her husband started yelling at her, asking, “Why are you so stupid? and chastised her for turning to her Christian God, who did not seem to have stopped the devastation or the pain.

He looked at his wife and said, “I’m so sorry.”

He then added, “I want to know the God you worship.”

It was the first time, Chit Htwe later shared, that her husband had apologized to her for all their years together.

Chit Htwe explained to her husband that “we don’t just worship God when we’re rich and in a good place – we also do it when we’re in pain.”

Something changed in Si Thu, and he decided he wanted to become a Catholic.

Stunned but cautiously optimistic, Chit Htwe connected Si Thu with Father Stephen Van Lal Than, associate pastor at Holy Spirit Parish. The priest himself is from Myanmar and leads the Myanmar Catholic ministry at the parish.

Father Van Lal Than visited the family soon after, and Si Thu expressed his desire to enter the Catholic Church.

“I came to see if it was a real conversion and I believe it is,” the priest said.

Father Van Lal Than, who grew up in predominantly Buddhist Myanmar, studied the Buddhist religion and even has many Buddhist friends. He explained that Buddhism itself does not promote violence and hatred towards other religions, but that is how Si Thu had interpreted it.

“He never studied theology, but his questions were so deep,” Fr. Van Lal Than told Western Kentucky Catholic.

Since then, Si Thu began the process of the Rite of Christian Initiation for Adults to enter the Catholic Church during the Easter Vigil this year.

He meets regularly with Father Van Lal Than. Since he doesn’t speak much English, he is unable to fully participate in the parish’s standard RCIA sessions. Si Thu is one of six Myanmar residents who will enter the church this spring, the priest said.

Si Thu has colleagues who are Catholic and he has started asking them questions about their faith. If their answers do not satisfy him, he writes down his questions in a notebook and presents them to Father Van Lal Than.

He also spends time reading the gospels and writing more questions for the priest.

Chit Htwe also does her best to answer her husband’s pressing questions, such as why ashes are used on Ash Wednesday or why meat is not eaten on Fridays in Lent.

Chit Htwe said she explained why the outside didn’t matter as much as the inside: “The ashes are just an outward sign – you have to purify your heart too,” she told him. she says.

This concept of inner transformation helped form a path of healing from the years of hostility in their marriage.

Of her husband who became a Catholic, Chit Htwe said she urged him, “Don’t do this because of me. She wants him to do it for himself, which he says is her goal.

Si Thu’s change has made a marked difference in their overall family life. He is kinder to Chit Htwe. He apologized to their daughters for his short temper – which is still a struggle, “but so much has changed,” Chit Htwe said.

He used to despise Catholic music but now plays Catholic songs in their house.

Chit Htwe sees it as the fruit of many years of prayer for her husband, during which she would pray for more patience with him “and to change her heart”.

Father Van Lal Than said he was aware of Si Thu’s previous struggles, and “I saw a huge change in him now. He is very active now, asking questions, very engaged.

“I believe it’s the Holy Spirit,” he said.

Barnstead is editor of Western Kentucky Catholic, the newspaper of the Diocese of Owensboro.