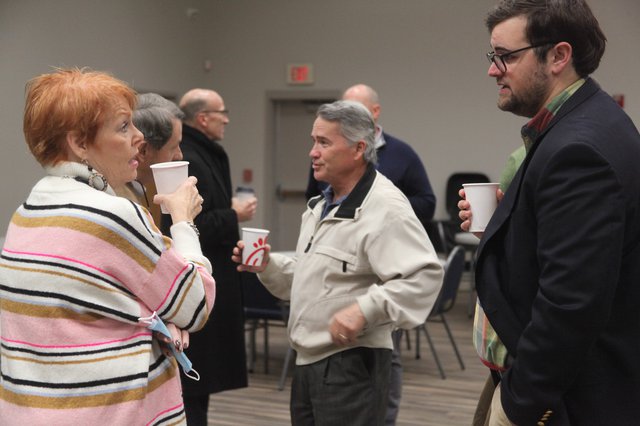 COVINGTON, Georgia. – Newton County motorists using Salem Road and commuters to Atlanta on I-20 could face major construction projects around the middle of next year.

Construction on both segments of a Salem Road (Georgia Hwy. 162) widening project in Newton and Rockdale counties will begin around the same time in 2023, GDOT Commissioner Russell McMurry said.

McMurry provided an update at the annual prayer breakfast hosted by the Rotary and Kiwanis clubs of Covington.

He said the two segments of Salem Road were being completed at about the same time, so “you are going through a construction project.”

“Be with us – the orange barrels are a step forward,” McMurry said.

In Newton County, work is expected to begin in the summer of 2023 on the widening and reconstruction of Salem Road from Old Salem Road to Brown Bridge Road, McMurry said.

The 1.7-mile project will take it from its current two-lane to 12-foot four lanes with a 20-foot raised median in the middle, he said.

The GDOT is purchasing right-of-way land for the road totaling 119 plots, McMurry said.

Part of the road will be built on a new location for approximately 0.6 miles to bypass historic Salem Campground and the Salem United Methodist Church, according to an Atlanta Regional Commission study.

Old Concord Drive will no longer have direct access to Salem Road and will end in a cul-de-sac, he said.

In addition, construction of the portion of Salem Road between Old Salem Road and I-20 is expected to begin at the same time, McMurry said.

“We are currently buying a property,” said McMurry.

GDOT has acquired around 50 of the 150 plots needed for the project, he said.

District 2 County Commissioner Demond Mason said he believed his constituents in West Newton were “ready for this” road project.

“I think the constituents in District 2 are looking forward to this because we really want to see more retail (stores) development in the western part of the county,” he said.

“We know that if we can handle this traffic problem, it will be a lot easier for us to start development,” Mason said.

“It’s great to see our heads of state partnering with the county to make sure we have the right infrastructure here,” he said.

Some other regional projects that McMurry highlighted in his speech:

• The Federal Occupational Safety and Health Administration (OSHA) is still working with the contractor on an investigation into the October collapse of the Access Road Bridge over the Yellow River in western Newton County, a McMurry said.

Work was halted after a man died when the decades-old structure collapsed as workers were removing parts of it for a replacement project. The bridge is approximately 100 yards east of the Crowell Road exit of I-20.

The $ 800 million project will build a new interchange, add lanes on both highways and replace various bridges.

He noted that the exchange has been ranked among the top 50 freight bottlenecks in the country.

The often dangerous exit has been the scene of numerous semi-trailer wrecks in recent years.