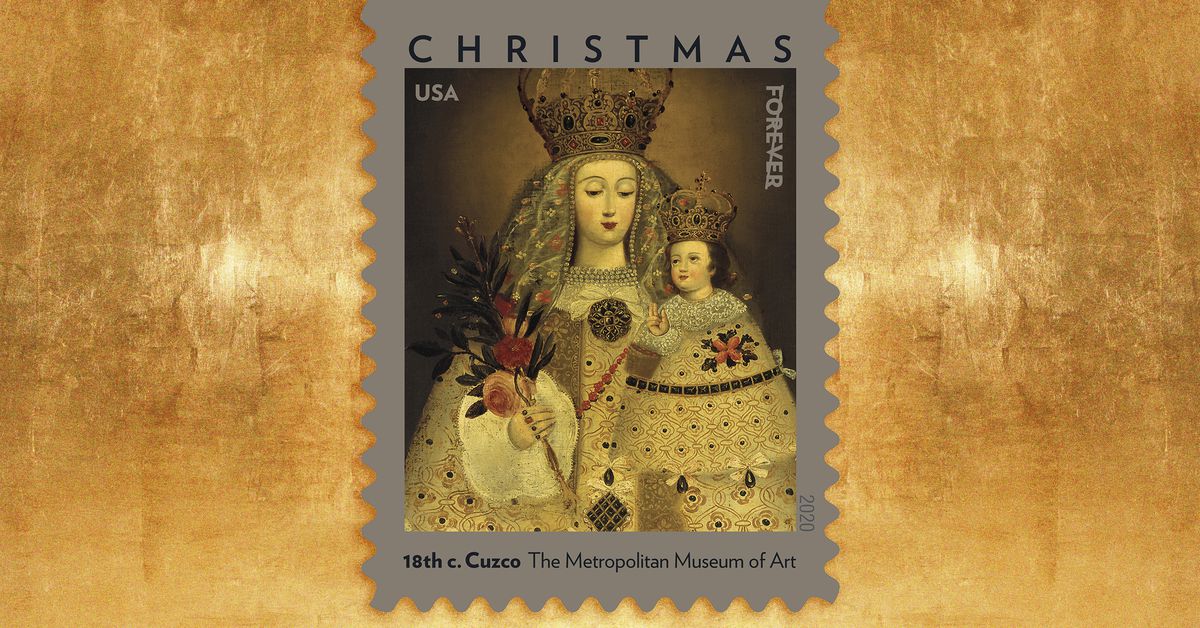 What’s on the U.S. Postal Service Christmas stamps this year?

At first glance, I was sure the US Postal Service had woken up with its holiday stamps.

While browsing the selection online, I did not find anything that looked like a crib, swaddling clothes or wise men crossing in the distance. Instead, there’s a mother and child that looks like it came out of a Victorian Secret catalog. They wear crowns studded with jewels and dresses adorned with bows and lace necklaces. This is not the kind of outfit you would wear in a stable. It’s not at all the kind of outfit you would put on a kid, not if you liked it.

It turns out that the image is from a The painting at the Metropolitan Museum of Art in New York. Called “Our Lady of GuÃ¡pulo”, it is an 18th century work by an artist unknown in Peru. But as grand as the painting is, it does not announce “Christmas” as one might think a Christmas stamp.

I wondered if this was intentional, another attempt to diminish the Christmas story, to rename a holy day as a holiday, to promote a generic â€œfestiveâ€ season instead. Will there be a classic nativity scene on a holiday stamp again, as even churches are reinventing the nativity scene in order to make political statements? I have a friend who bought a 12 month supply of Christmas stamps a long time ago, so she could quietly bear witness to her faith all year round. Previous Christmas stamps were perfect for this, like the 2016 stamp, â€œThe Holy Familyâ€ and the 2014 â€œChristmas Magiâ€. This one, not so much.

But looking at past holiday stamps and learning more about their history has given me another reason to be grateful this week: we still have the option of buying Christmas stamps.

The holiday stamps were first issued in 1962, more than 30 years after their first proposal – not to spread a religious message, but to generate more profit for the US Postal Service. According to a the story stamps on the USPS website, some postmasters believed that the availability of Christmas-themed stamps would encourage people to mail holiday cards first class “rather than the cheaper third class fare” .

They weren’t wrong. The first Christmas stamp – featuring two candles, a wreath, and the words “Christmas 1962” – sold out in some places within hours. (The first class postage was then 4 cents.) Despite its popularity, the stamp made History.com’s list of 11 most controversial stamps, who said “he was attacked for crossing the line between church and state as well as for despising other faiths.” Some Christians also opposed it, saying the government should not interfere in their religion.

A Christmas stamp three years later was also on the “most controversial list” because of an image of the angel Gabriel that was taken from a New England weather vane. (Critics objected to the female form of the angel.)

You would think the post office would have stopped there and reverted to stamps depicting waterfowl and sporting heroes, but it waded through even more controversial waters the following year when the first Madonna of the Virgin stamp child is out.

This stamp resulted in a lawsuit in 1967 by Protestants and other Americans United for the Separation of Church and State, who argued that “the likeness of the Madonna is a religious symbol commonly associated with the Catholic Church. Roman; and that, therefore, the fact that the government issues such a postage stamp violates the First Amendment of the Constitution. A federal judge dismissed the lawsuit, saying the plaintiffs lacked standing.

Finally, in 1970, the postal service found a solution. It would issue a religious stamp for Christmas and another on a secular theme. This tradition continues today in the Stamps on the theme of Santa Claus issued this year, as well as “otters in the snow”. But there is still a religious-themed Christmas stamp available each year, although the collection has expanded to include Hanukkah, Kwanzaa, Eid, and Diwali.

Sara Martin, a senior public relations representative for the USPS, told me that Postmaster General Louis DeJoy is selecting new stamp designs based on recommendations from a Citizen Stamp Advisory Committee. And anyone can make a suggestion; the committee receives about 30,000 ideas each year from which 25 to 30 topics are chosen.

So the chances of my dream Christmas stamp – an artist’s rendition of the Christmas carol “Friendly beastsâ€- probably won’t arrive in a mailbox near you anytime soon. But for those of us who prefer a more traditional Christmas stamp than the one currently available, there are options available to us through the old-fashioned way capitalism works.

In doing so, be grateful. In this period of rampant secularism, it is a Christmas miracle that religious stamps are still available from our postal workers. God bless them, each one.

Having said that, it’s not a bad idea to stock up. The eBay offer can only last that long.