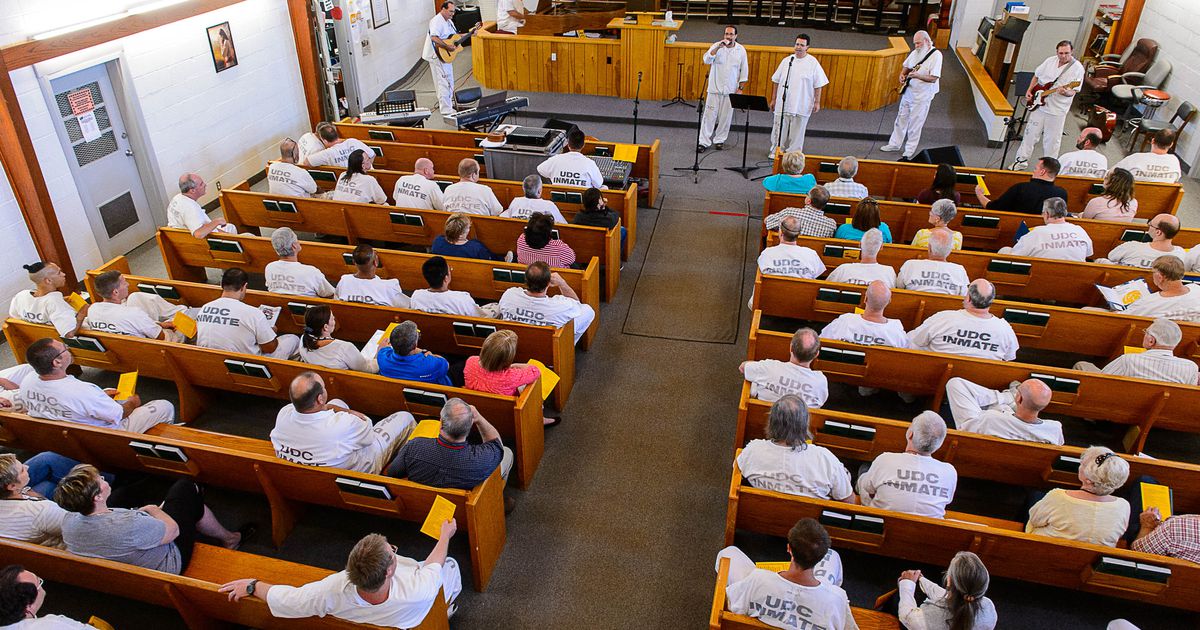 A Draper prison shrine long dedicated to saving lives will see its own salvation.

The state land authority governing what is to replace the Utah State Prison and adjacent lands at Point of the Mountain voted Thursday to preserve the Wayside Penitentiary Chapel, a small spiritual refuge of 61 year old nestled inside the gray concrete walls of the Wasatch cellblock.

As a new jail nears completion on the west end of Salt Lake City — and the Utah Department of Corrections prepares to move the prison population north later this summer — members of the land authority had resisted attempts to salvage historic features by demolishing the old site, citing a desire to move past its notorious reputation.

But the 11-member panel changed course on Thursday – after hearing from a leading conservative and the moving stories of prison ministers and a former prisoner who spoke of redemption and healing from decades of social programs offered under the vaulted ceiling of the chapel.

Council members voted unanimously to explore ways to save it and fund refurbishment and adaptive reuse with public and private funds, even if it means moving the chapel to a new location on the footprint of The Point.

“We have today received a decision that the chapel will be preserved,” said Alan Matheson, executive director of the land authority, after the meeting. “We need to explore ways to pay for this. Understand that we have very limited funds for this project and we are trying to be as efficient as possible.

The prison’s central locking system, known as the Johnson bar, and a set of art deco metal toilet panels that caught the interest of Lieutenant Governor Deidre Henderson, who co-heads the Lands Authority, must also be preserved.

“They’re really cool,” Henderson said Thursday. “They are original and they would be really interesting.”

In the beginning: how the chapel was born

(Photo Salt Lake Tribune, University of Utah) Utah Governor George Clyde, during the construction of the Utah State Prison Chapel at Wayside, June 18, 1958 The Point of the Mountain State Land Authority voted Thursday to save the chapel when it tears down the rest of the jail.

Planning for the old prison began in 1937, with the recognition that the Utah Territorial Penitentiary, located where Sugar House Park stands today, was becoming increasingly overcrowded and needed to be moved as Salt Lake City continued to grow. The first 575 inmates traveled by bus to the newly completed prison, located on Draper’s Bitterbrush Lane, in 1951.

Chapel by the Wayside grew out of a 1957 prison riot. Dissatisfied with their living conditions, the inmates took several hostages and sent a list of grievances directly to the governor at the time. George Clyde. Among their demands before the Utah National Guard crushed the uprising, according to David Amott, executive director of Preservation Utah, was the demand for a “real chapel.”

“At that time,” Amott said, “the prisoners took matters into their own hands and designed the prison chapel themselves.”

Clyde led a statewide campaign to raise funds, which led to “an outpouring of support from all over Utah, from people from all walks of life,” Amott said, as well as social groups and major religions in the region, including the Catholic Church, various Protestant denominations, and The Church of Jesus Christ of Latter-day Saints.

Since its opening in 1961, Amott said, the chapel “has become a great point of service, dedication and transformation.”

William Lawson, a former prisoner who now lives in Ogden, told the land authority he had served as clerk in the chapel, a break which occurred “when I was probably at the lowest point of my life. life that anyone could possibly live”.

Working with volunteers, many of whom have helped inmates with matters of faith “absolutely changed my life,” Lawson said, “and most likely saved it.”

(Al Hartmann | The Salt Lake Tribune) Inmates at Utah State Prison in Draper knit in the quiet setting of the prison chapel in this file photo. Plans to preserve this worship space when the prison moves.

Along with finding solace in spirituality, he said, “equally important was the possibility of being able to step out of the main hallway of this incredibly cold and isolating place and find, for a moment, a piece of our day. to touch again. basis with dignity, self-respect and self-esteem.

Saving the Chapel, Lawson said, “provides a way to accurately document the decades of complicated history that unfolded behind the walls of the Utah State Penitentiary.”

“I am a living piece,” he added, “of this complicated history.”

The Reverend Bill Germundson, prison ministry director for St. Francis of Assisi Christian Church in Murray, said the preservation of the chapel “will be a lasting and loving memory of all the tears shed, the transformations of prisoners and Utah residents who have reached reach out in love to their neighbors.

His colleague, the Reverend Charles Hines, called the chapel “holy ground” and insisted that it “continue to be a place of prayer and meditation for the people of Draper”.

(Trent Nelson | The Salt Lake Tribune) Inmates perform in the chapel at Utah State Prison in Draper in 2017. The state plans to preserve the chapel.

Until recently, Draper Mayor Troy Walker had opposed any large-scale effort to preserve parts of the prison, noting that many longtime residents had negative and painful associations with its past.

The sprawling prison campus housed top criminals such as forger-bomber Mark Hofmann and death row inmate Ron Lafferty, whose murderous acts were recently resurrected in the TV miniseries “Under the Banner of Heaven.” Killer Gary Gilmore made headlines around the world in 1977 when he became the first American inmate to be executed after a decade-long moratorium on capital punishment.

But on Thursday, Walker said the chapel “is the only building that makes sense to preserve.” Co-leader of the panel, Rep. Lowry Snow, R-St. George, added that the idea resonates with Utah, with its “deep roots in religious and spiritual beliefs.”

“We believe in redemption,” Snow said. “Regardless of our religious affiliation, we as Utahns believe that we are capable of bringing about change in our lives, with the help of the powers on high. Our churches and chapels help us in this effort.

Amott, who lobbied for more than a year to save parts of the prison, later said his group was “delighted that this building with such an inspiring history continues to serve the new Point community.”

He told the land authority that architectural experts have proposed reusing the chapel as an office space or coworking site, possibly connected to new towers and research facilities the state plans to build at The Point. as part of a new innovation district.

“It would introduce that texture and that critical narrative into the development of The Point,” he said. “It would contrast with all the new buildings around it and indicate that this site has a past. It has a story to tell, and the chapel itself tells a fascinating story.

(Trent Nelson | The Salt Lake Tribune) Inmates perform in the chapel at Utah State Prison in Draper in 2017. A state panel voted to preserve this worship space when the prison moves to Salt Lake City.