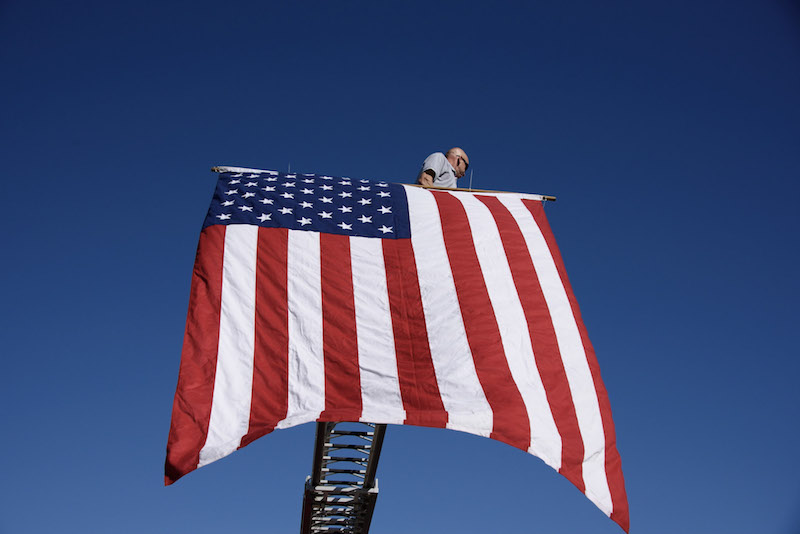 Martha’s Vineyard marked the 20th anniversary of 9/11 in a quiet Saturday morning, with the sound of church bells and rescuers standing in silent salutes to commemorate the nearly 3,000 people who died in the terrorist attacks in New York City, and thousands more whose lives have been affected.

At Edgartown Federated Church, Reverend Charlotte Wright sat on the slate and brick steps of the 1824 building and, along with congregation member Jim Butterick, greeted Gretchen Regan and her teenage sons Nate and Brett, who arrived just before 8:45 p.m. am

Nate and Brett have been responsible for ringing church bells 20 times, one for each year since the tragedy. People stopped and listened, and silence fell over Edgartown as the bells rang; even the bugs and birds of South Summer Street seemed to take a break.

The ringing of church bells has a long civic history in New England city life, once serving as a fire caller to deal with a local fire. The Federated Church building itself, built on the site of the original Mayhew parish, was the town’s meeting place. Reverend Wright noted that the church honors the tradition of ringing the bells daily at 9 a.m. and 6 p.m., when hymns are ringing from the steeple.

Her own recollections of the tragedy included her ministry to the people of Longmeadow, where she was stationed at the time.

The Edgartown and Oak Bluffs Fire Departments marked the anniversary with solemn ceremonies.

In Edgartown shortly before 10 a.m., firefighters in full uniforms gathered outside the station, where three trucks were driven out for the occasion. The bells rang 20 times at the start of the service, which included half-masting the flag and a reading of the firefighter’s prayer by service member Kara Shemeth. The end of the prayer expresses the hope that the firefighters will continue to serve with confidence and courage.

As Edgartown Police Chief Bruce McNamee played Amazing Grace on the bagpipe, traffic stopped. Cars reverently idled at the intersection of High Street and Katama Road as the notes echoed plaintively through the air.

A similar ceremony took place at the same time in Oak Bluffs at the Wing Road Fire Station, where servicemen, boy scouts and others gathered on a blue sky day that had a hint of a fall in the air. .

In Edgartown, coach Michael Donaroma referred to the now colloquial expression associated with the 9/11 tragedy.

“We must never forget,” he said.