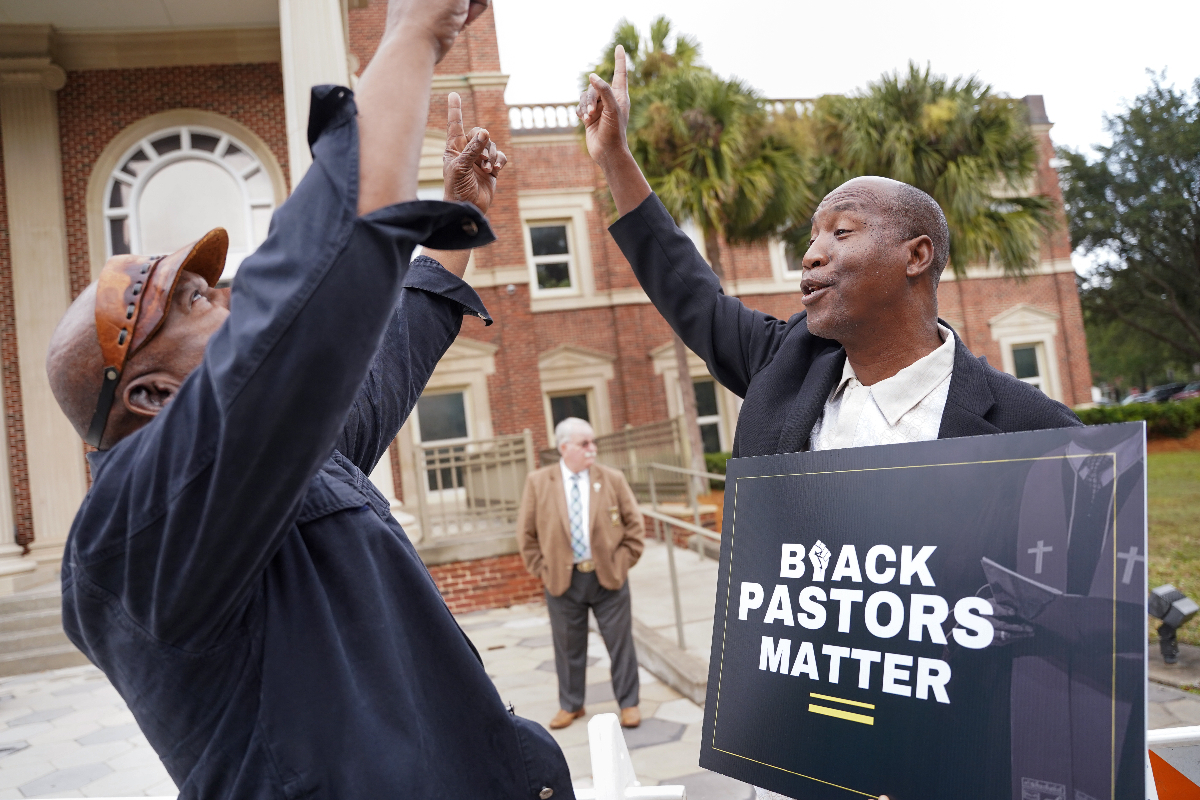 A “sea of â€‹â€‹preachers” gathered Thursday at the Glynn County Courthouse in Brunswick, Georgia, where three white men are on trial for the murder of 25-year-old Ahmaud Arbery.

The rally comes a week after defense attorney Kevin Gough asked a judge to limit the number of black pastors who can support Arbery’s family in the courtroom.

Quine Cousins, senior pastor at the Lighthouse Seventh-day Adventist Church in Ellenwood, Ga., Recorded video Thursday morning showing dozens of clergy and supporters gathered at the courthouse. He described the scene as a â€œpicnicâ€.

“It’s a picnic here,” he said before adding that it was Gough’s comments about the black pastors that sparked the rally.

â€œAs I watched the proceedings inside the courtroom this morning, lawyer Kevin Gough called Louis Farrakhan. This guy just calls preachers, and because he called preachers the other day, [heâ€™s the reason why weâ€™re here]. And so, if you’re on your way, introduce yourself. … I wish you were here to see the sea of â€‹â€‹preachers, â€he said.

Arbery was gunned down while jogging in Glynn County on February 23, 2020. Three white men – Gough’s client William “Roddie” Bryan Jr., Gregory McMichael, 65, and his son Travis McMichael, 35 years old – are on trial at the courthouse for Arbery’s death.

Gough argued in court last Thursday that Sharpton’s presence and the presence of other prominent black ministers in the courtroom could “knowingly or unknowingly … pressure or influence the jury” against his client.

â€œIf we’re going to set a precedent that started yesterday, we’re going to bring high-level members of the African American community into the courtroom to sit with the family during the trial in front of the jury. I think it’s intimidating, and it’s an attempt to pressure – it can be consciously or unconsciously – an attempt to pressure or influence the jury, â€Gough argued.

â€œTo my knowledge, Reverend Sharpton does not have a church in Glynn County. He never did. â€¦ We don’t want black pastors to come here or whatever – Jesse Jackson, whoever was here earlier this week – sitting with the victim’s family trying to sway a jury in this case, â€he said. .

â€œI felt very insulted. I felt belittled as a pastor. I felt belittled as a man and quite simply as a human being, â€Corbett told WJBF. â€œI think it’s really vital for the church to speak up and for pastors to speak up. There is so much injustice that we don’t even know what’s going on in our world. I think the church as a whole should take a stand against these injustices.

John Perry, the immediate past president of the Brunswick branch of the NAACP and senior pastor of the Mount Sinai Baptist Missionary Church in Brunswick, told the Atlanta Journal-Constitution that hundreds of pastors were to attend the palace. justice Thursday.

â€œThere are hundreds of pastors who are supposed to come from all over the country, and we are delighted to have them,â€ he said. “As a community, we believe in faith and we believe in the role of faith in righteousness.”