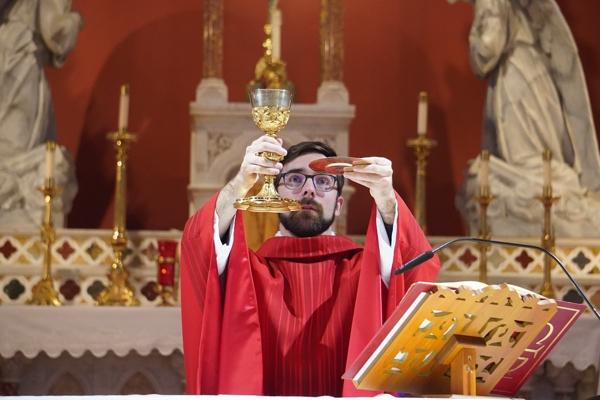 Distribution stopped due to virus, pandemic must be declared over before it returns

Cathedral administrator Father Joseph de Orbegozo consecrates the wine at the daily Mass on November 23 in Little Rock. Consecrated wine will not be available to lay people until after Easter, said a diocesan official.

Cathedral administrator Father Joseph de Orbegozo consecrates the wine at the daily Mass on November 23 in Little Rock. Consecrated wine will not be available to lay people until after Easter, said a diocesan official.

Before the COVID-19 pandemic, worshipers lined the aisles of Mass with the echoing phrases â€œThe blood of Christâ€, â€œThe body of Christâ€ and â€œAmensâ€ echoing throughout the sanctuary.

Although masks and social distancing have partly eased thanks to the vaccines, the chalices filled with sacramental wine have not yet returned.

Jesus instituted the Eucharist at the Last Supper, consecrating his body and blood for his disciples and in turn, all the faithful. The bread and the wine become the Body and the Blood of Christ at each Mass at the hands of the priest by transubstantiation. While the Body of Christ is distributed at each Mass, the Precious Blood has not always been universally available.

â€œI want to emphasize that by receiving the host, you fully receive the Lord,â€ said Father Juan Guido, pastor of Christ the King Church in Fort Smith and diocesan director of the Office of Divine Worship. “That doesn’t mean you have to receive both to receive it fully, no.”

“In 1963, Vatican II, in its ‘Constitution on the Holy Liturgy’, asked the laity who received First Communion to also receive the Blood of Christ to allow greater participation in the offering at Mass.”

In the early Church, both kinds of bread and wine were distributed. Over time, the practice changed, the Council of Constance noting in 1415 that renouncing the wine consecrated for the laity avoided “certain dangers and scandals”. These included the spillage of the Precious Blood during distribution, health problems, drunkenness from the wine and the theft of chalices with the consecrated wine, according to an archived article in the Arlington Catholic Herald.

For centuries, the priest was the only one to consume consecrated wine. In 1963, Vatican II, in its â€œConstitution on the Holy Liturgyâ€, asked the laity who received First Communion to also receive the Blood of Christ to allow greater participation in the offering at Mass. However, according to the Catechism of Catholic Church, because the presence of Christ is in both species, â€œall the fruits of Eucharistic graceâ€ can be fully received either in consecrated bread or in wine. (Catechism, n Â° 1390)

In 1970, the Sacred Congregation for Divine Worship asked episcopal conferences to decide the extent to which to share both the bread and the wine consecrated in communion. The United States Conference of Catholic Bishops took it one step further in 1984, allowing bishops to decide what was best for their individual dioceses.

Outside of the United States, including in Europe and Latin America, the Blood of Christ is not commonly offered to lay people during Mass.

“In other countries, they used to do more extinction, dipping the precious body in the precious blood and giving it to the people,” Father Guido said, adding that he had not seen any documents. prohibiting this practice in the United States, but that it is not commonly practiced.

â€œThey used to do it for big celebrations, like to receive First Communion or something big, but it wasn’t a daily thing (or on) Sunday,â€ Father Guido said of extinction in d ‘ other countries.

In recent years, access to the specific type of wine mandated by the Vatican could also play a role, especially in underdeveloped countries. On June 15, 2017, the Vatican offices of the Congregation for Divine Worship and the Discipline of the Sacraments sent a letter to the bishops with demands regarding bread and wine and â€œthe value of the materialâ€.

He said, citing Redemptionis Sacramentum published in 2004 to help bishops implement the updated Roman Missal, wine “must be natural, from the fruit of the grape, pure and uncorrupted, not mixed with other substances. … Great care must be taken to ensure that the wine intended for the celebration of the Eucharist is well preserved and has not soured. (See box)

A bread, a body

The use of a communal chalice represents unity.

â€œWe, as pilgrim people, when we walk to the altar, we are on a pilgrimage to receive food. Even though there are many chalices, different cups, it has a practical aspect and a unifying aspect, â€said Father Guido, saying that if everyone drank from the priest’s chalice, communion would be logistically difficult. .

He said that there is no limit on the number of vessels for dispensing Precious Blood, however, they must be of precious metal, as stated in the General Instruction of the Roman Missal: â€œSacred vessels must be made from precious metal. If they are made of a metal that rusts or a metal less valuable than gold, they should normally be golden on the inside.

In the United States, sacred vessels can also be made from other solid materials “which, according to the common estimate in each region, are valuable … they must have bowls of non-absorbent material.”

Father Guido said he did not see a scenario of individual small metal containers.

â€œThe reason I’m saying this, if you see how expensive chalices are, I can’t imagine how expensive it would be to buy all of these things,â€ Father Guido said.

â€œI’m just talking from the point of view of being good stewards of the money for the parishes, it will be a very, very expensive purchase to implement. ”

He admitted that the extinction could become “more prevalent” in the United States in a post-pandemic COVID-19 world.

Due to the lack of information on COVID-19 at the start of the pandemic, Father Guido said it made sense to stop offering the Blood of Christ and increase sanitation procedures for Eucharistic ministers distributing the Body of Christ. Some parishioners asked him when the Precious Blood would return and others would feel uncomfortable sharing a community chalice.

The priest continues to drink the Precious Blood at Mass after the consecration because â€œMass is the holy sacrifice. In order for us to truly accomplish the sacrifice, both must be accomplished because we are in persona Christi (in the person of Christ) at that time in the priestly office.

Rather than focusing on when the Blood of Christ will again be widely available to lay people, Father Guido said it is more important to remember the respect with which people should receive the Eucharist.

â€œIt is important for us to have the reverence at this time; never lose respect during a pandemic. This means that sometimes we can be so afraid that someone will touch the bread, or â€œI have to do it quicklyâ€. We must have a feeling of reverence because we receive our Lord and Savior in the Eucharist, â€said Father Guido. â€œLike making sure there is nothing left in our hands. Sometimes I feel like people catch it, which hurts â€to see.

Before COVID-19, especially during flu season, pastors reminded worshipers not to attend mass if a person was contagious or at least to refrain from shaking hands during the peace sign or receiving the Precious Blood.

Previous studies show that there is minimal risk of sharing a cup of communion. The American Journal of Infection Control stated in 1998 that there is a “theoretical risk” but also “the risk is so small that it is undetectable”. In 2005, a microbiologist from New Jersey conducted a study and found that people who communicated did not get sick more often than others and “it is not riskier than queuing at the movies,” as reported. the Los Angeles Times.

A medical entry titled “COVID-19 and Holy Communion,” published in the fall of 2020 via PubMed Central, an archive of biomedical and life science literature at the National Library of Medicine at the United States National Institutes of Health United said there was little research on the topic.

He said, â€œThe communion cup can theoretically serve as a vehicle for transmission of infection, but the potential risk of transmission is very low. Currently, the available data does not support the suggestion that the practice of sharing a common communion cup may contribute to the spread of COVID-19 because the transmission of SARS-CoV-2 from a patient with COVID- 19 or asymptomatic carrier to other people has not been reported.

Dr. Lee Wilbur, an emergency physician at CHI St. Vincent Infirmary in Little Rock, served as Eucharistic minister for two years at Christ the King Church in Little Rock. He has worked with patients with COVID-19 and was a principal investigator for the AstraZeneca Phase 3 COVID-19 vaccine trial at the Little Rock Applied Research Center.

â€œI don’t think we know what the exact risk is,â€ he said of the spread of COVID-19 through a communal chalice. “We have to assume that some risk may exist.”

â€œI thought about it when we were involved in how we protect ourselves from infections during the pandemic when we came back to church, when we used hand sanitizerâ€ before distributing Communion, he said. declared. â€œDeep in my heart, I felt we were protected. That God would protect us from infection during Communion.

As a physician, when you consider how particular diseases or viruses are spread by touch or otherwise, â€œof course it can. I just feel like there is a feeling of sacred protection from God at this time.

Column: “Why does Mater Dei protect bullies?” »A school and the Diocese of Orange County have a lot to answer