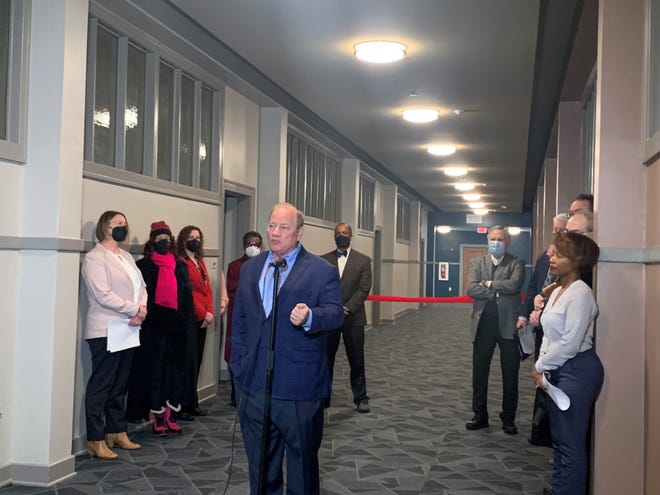 A $7.2 million renovation has turned a former Catholic school in Detroit’s Banglatown neighborhood into housing.

City officials and developers marked the opening of Transfiguration Place apartments on Monday, where the 19 units are for people earning $28,000 or less who will pay no more than 30% of their income in rent and utilities.

The 21,500 square foot building at 13300 Syracuse near East McNichols features 17 one-bedroom apartments and two two-bedroom units. Built in 1926, the old school also served as a church until 1950. It has been unoccupied since 2014. It is the only surviving part of a complex added to the National Register of Historic Places in 2019.

“No longer an educational element in the community, Transfiguration is adaptive reuse at its best. Its scale matches the surrounding landscape and its use as housing for families fits well into the neighborhood,” said Sandra Henriquez, CEO of the Detroit Housing Commission. during Monday’s ribbon cutting. “Just as the old school was an anchor in this community, this housing can now serve the same purpose.”

Following:Long-vacant beauty Lee Plaza is set to be restored and will offer senior apartments

Following:Detroit Housing Fund raises $65 million. Here is a list of projects to date

Rent is expected to be $815 for one-bedroom units and $1,049 for two-bedroom units. Income-eligible residents will receive vouchers from the Detroit Housing Commission so that they pay no more than 30% of their income in rent. It will last 20 years, Henriquez said.

The developers are Detroit-based Ethos Development Partners and Lansing-based Cinnaire Solutions. In 2017, the city began working with the Archdiocese of Detroit to find a developer.

“We were in a neighborhood where people are coming back, property values ​​are rising rapidly, rents are rising rapidly, and there was a risk that long-time residents” would be evicted, Detroit Mayor Mike Duggan and the middle of it was an abandoned school.

“We know that adaptive reuse can have major impacts in neighborhoods – we have seen that downtown with many buildings that were once vacant are now hubs of activity,” said Julie Schneider, director of the housing department and of the revitalization of the city.

Victoria Griffin walked the halls of the school in her youth. She remembers the cafeteria and the gymnasium.

Griffin, 51, lives just 2 blocks away and has been a part of the neighborhood his whole life. The building’s transformation is an “important step”, she said. Griffin hopes that housing will remain affordable in the future and that more abandoned schools will be renovated in the same way.

“It’s a revitalization of my community. I grew up here as a kid, I stayed here. People kept saying to me, ‘Why do you live in Detroit? You don’t have need to stay in Detroit. You should leave Detroit’. but I love Detroit. And I’m an example of when you stay and fight, you can make a difference in your community,” she said.

Campau/Banglatown from Detroit piece – which sits near the Hamtramck-Detroit border – is home to a diverse population of African-American, Yemeni, Polish, and Bosnian residents. The area also has a tall bangladeshi immigrant population and a number of businesses line the commercial corridor, Conant Avenue.

About half of the residents of Banglatown and surrounding areas were born outside the United States, according to a report last year from Global Detroit, which studied the area and surrounding neighborhoods. Rapid growth in immigration has contributed to retail growth and housing stability, researchers have found. Sixty-three percent of area residents were homeowners, compared to 47% citywide.

“It just shows what it takes to build quality, affordable housing in our neighborhoods – something we don’t see often, but we’re seeing more of it now in the city of Detroit,” Scott Benson said. , a member of the Detroit City Council, whose district includes the neighborhood of Banglatown.

Residents interested in housing can call the Detroit Housing Commission at 313-877-7864.

Nushrat Rahman covers economic mobility issues for the Detroit Free Press and Detroit Bridge as a body member with Report for America, an initiative of The GroundTruth Project. Make a tax-deductible contribution to support his work at bit.ly/freepRFA.