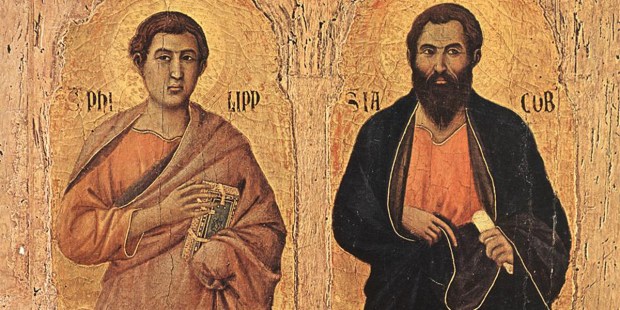 The Feast of Saint Philip and Saint James the Minor

By Monique M. Winebarger Last updated May 4, 2022
Share
Their story+ Philip was born in the city of Bethsaida in Galilee.

+ According to Gospel of JohnPhilip was called by Jesus the day after calling Peter and Andrew and he responded immediately, believing that Jesus was the Messiah.

+ Philip is also the one who approached Nathaniel to tell him that he had found “the one spoken of by Moses and the prophets” (John 12:20-22).

+ After the multiplication of the loaves and fishes, Jesus said to Philip: “He who sees me sees the Father” (John 14:8-11).

+ According to legend, Philip preached the Gospel in Greece after Pentecost and was crucified in Hierapolis.

+ After Jesus’ Ascension, James served as the head of the Church in Jerusalem and supported St. Peter’s decision regarding Gentile converts and the observance of Jewish laws.

+ Ancient tradition reports that James was martyred in Jerusalem around the year 62.

+ The New Testament Letter from James is attributed to James the Minor.

“Christ has given apostles, prophets, evangelists, pastors and teachers in roles of service to the faithful to build up the body of Christ, until we become one in faith and in the knowledge of Son of God, and form that perfect man which is Christ come to full stature. —Ephesians 4:11-13

O God, who gladdens us every year
with the feast of the apostles Philip and James,
grant us, through their prayers,
a share in the Passion and the Resurrection
of your only Son,
so that we can deserve to see you for eternity.
Through our Lord Jesus Christ, your Son,
who lives and reigns with you in the unity of the Holy Spirit,
God, forever and ever. Amen.

(from The Roman Missal)