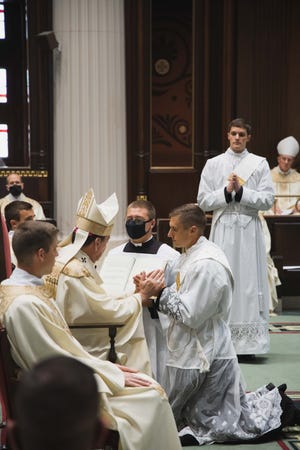 The Catholic Church would rather die than accept women as equals

It had been clear for some time, but it really crystallized for me when the Archdiocese of Cincinnati announced that in this great archdiocese, stretching to northern Ohio, the church is consolidating from parishes in parish families, called Beacons of Light. There have been several great Inquirer stories about this.

And, sure, they did it like the church has always done everything – by decree, by announcement, by telling people how wonderful it will be. “They” even exclaimed piously that it is the shortage of priests that is causing this shrinkage.

What is really causing this drastic change is quite simple – it is the misogyny of the Catholic Church; his hatred and fear of women – who created this need. (The other side of this story is that fewer and fewer men want to be priests, even with all the perks that come with â€œworkâ€.)

Even though women have served and maintained the church for years – always as an underclass, as servants, supporting the men who are very busy with unnecessary and unnecessary administrative tasks – the church no. ‘will not admit the equality of women, that women and men are equal. These are women who do and have done the work of this rich church.

Historically, Christ was not afraid of women. He had friends and supporters, women he consoled and women who consoled him. There were women among the Apostles, especially Mary Magdalene. There were female bishops in the early centuries of the Church. Much of this information is available, but little known.

Christ did not remove half of those who worked to grow the church in the early days, nor did the early church leaders, many of whom were women. Celibacy wasn’t mandated by the church until the 12th century – and that was because the sons of priests wanted their inheritances and threatened the growing financial and political power of the European church in the Middle Ages. And the Popes needed their money to build these huge edifices across this continent and to support their often decadent lifestyles. Many were as rich and powerful as kings. (The Templars were destroyed because their wealth was coveted by these kings and popes.)

When parishes become parish groups / families – beacons of light – there will be no light. Women and their families will lose even more of the community and spirituality they expect from their churches. And will have even less reason to support the institution which no longer supports them in a meaningful way.

To me, it is as if the Catholic Church has realized that it is in trouble and has joined the fight to destroy itself. Foolishness, man-splaining are everywhere.

All because of their fear of emasculation (at the deepest level), the fear of losing political and religious power (at the middle level) and the simple fear of losing the status of an important man in the community.

Where is God in all of this? Not found.

Patricia Garry is a resident of Walnut Hills. She grew up Irish Catholic in St. Raphael Parish in Springfield, Ohio in the 1940s.