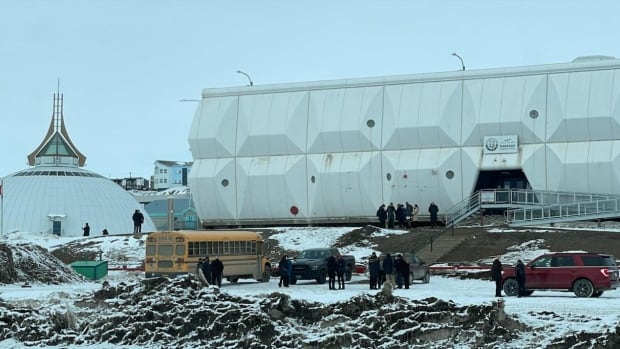 Start of location scouting for the papal visit to Iqaluit

The search for venues for Pope Francis’ next visit to Canada is underway, as Catholic Church officials visited the northern community of Iqaluit on Friday.

The Pope is expected to issue a long-awaited apology regarding residential schools on Canadian soil.

Iqaluit Mayor Kenny Bell says Pope Francis is welcome there, but the Catholic Church must also keep its promises made more than a decade ago to properly compensate survivors and release records on the schools and burial sites.

“Residential schools had a terrible impact on Iqaluit and Nunavut, and we have to get over it,” Bell said. “I don’t think they’ve done enough… [they] We have to come to terms with that and make amends. »

After landing at the airport at noon local time, the delegation was greeted by local Inuit leaders. They were taken by school bus to several locations, including the Legislative Assembly of Nunavut, an elementary school and an outdoor plaza.

I think they didn’t do enough… [they] We have to come to terms with that and make amends.– Iqualit Mayor Kenny Bell

Neil MacCarthy of the Canadian Conference of Catholic Bishops (CCCB) confirmed that a delegation from the Catholic Church was in Iqaluit, but said no final decision had been made on the location of the papal visit.

“We can no longer allow churches … to have free rein in our country,” Bell told CBC News last summer.

Bell, who was absent from a northern Alaska housing conference on Friday, said in a phone interview that he and city councilors are moving forward with new tax rules that will force all churches and non-profit groups to prove they need money to get tax breaks. The first two readings passed unanimously, and the third and final reading is expected next week, he said.

Although the Catholic Church’s tax status is judged by the results of its local parish, Bell hopes this is a first step towards a fairer system.

“The Vatican is one of the wealthiest corporations in the world. We started figuring out how to get some of their money and land back,” Bell said.

Residential school survivors and members of the recent delegation to the Vatican suggested several other locations, including Tk’emlúps te Secwépemc in British Columbia, Cowessess and Wanuskewin Heritage Park in Saskatchewan and Winnipeg.

Pope Francis mentioned Lake Ste. Anne near Edmonton in her address to delegates in Rome.

Survivors say they should have the final say on where, when and other details of the apology. They also hope that Pope Francis will make several stops.

CCCB officials said they are working closely with indigenous peoples and hope to announce more details soon. They agreed that an apology is a first step and that action is also necessary to achieve reconciliation.

In 2006, facing billions in potential lawsuits from survivors, other Christian churches signed the Indian Residential Schools Settlement Agreement. The Anglican, Presbyterian and United Churches have all paid the designated amounts in full and disclosed many of the required documents. The Catholic Church did not.

According to some estimates, the Catholic Church still owes the survivors more than $60 million. The CCCB has promised a new fundraising campaign of $30 million over five years.