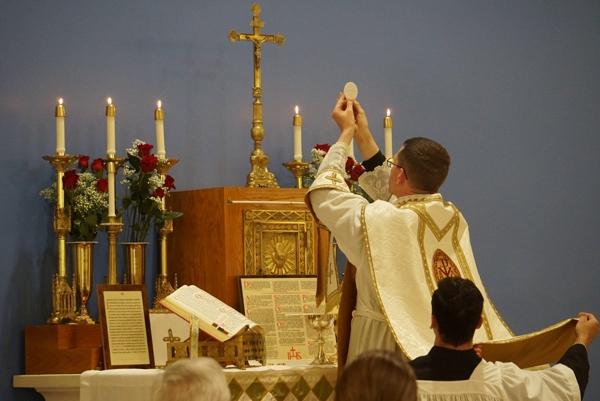 Father Jared McCambridge, FSSP, pastor of St. John the Baptist Church in Cabot, consecrates the Eucharist during the Tridentine Rite Mass following the dedication of the parish’s new shrine by Bishop Anthony B. Taylor, March 19 . The parish moved to a former Christian Church at 602 E. Main Street to allow a larger congregation to attend masses.

Father Jared McCambridge, FSSP, pastor of St. John the Baptist Church in Cabot, consecrates the Eucharist during the Tridentine Rite Mass following the dedication of the parish’s new shrine by Bishop Anthony B. Taylor, March 19 . The parish moved to a former Christian Church at 602 E. Main Street to allow a larger congregation to attend masses.

The Latin Mass community in central Arkansas is seeing the fruits of opening its first church five years ago.

For 23 years, the community had to borrow premises from the St. John Center in Little Rock or from different parishes where they could celebrate the Tridentine Rite Mass.

In 2017, St. John the Baptist Church was established in Cabot in a former daycare center. Since then, the parish has grown and now has two Sunday masses and more activities for parishioners.

On March 19, the parish took another step by moving to a former Christian church at 602 E. Main Street. Bishop Anthony B. Taylor led the dedication service.

“Recently we have been…to the point where for the past two months during late mass (at 10 a.m.) we have not been able to accommodate everyone inside the church. We have really outgrown our first location in Cabot.

Pastor Father Jared McCambridge, FSSP, said it became clear in 2020 that St. John the Baptist Church would need to look for a larger church. Attendance was around 170 people at weekend Masses in October 2017, and in October 2021 it was around 270.

“Recently we’ve had even more than that, to the point where for the past two months during late mass (10 a.m.) we haven’t been able to accommodate everyone inside the church. We had 30 or up to 40 people sitting in the social room and watching Mass on video and listening to it on the speakers on the equipment we had set up during the time we had COVID restrictions. really exceeded the size of our first location in Cabot.

The remodeling of the old church was considered.

“It turned out that this was not going to be possible to the extent that we had hoped. We couldn’t really increase the number of seats,” the pastor said.

Pope Francis issued a document in December limiting pre-Vatican II Mass celebrations. In the Diocese of Little Rock, Mass in Latin is permitted only in the two personal parishes overseen by the Fraternity of St. Peter, St. John the Baptist in Cabot and Our Lady of Sorrows in Springdale.

To accommodate their growth, Cabot Church was able to purchase a larger property in December 2020 from a moving Christian church, and they began renovations in the fall of 2021.

“The zeal and generosity of the parishioners is remarkable,” he said.

Contractors were hired to install drywall and lighting, paint the interior, remodel an area for a confessional, and install a platform for the altar. Parishioners volunteered their time to complete the project.

“The parishioners did all the framing and some painting and drywalling,” the pastor said.

Pews from the old church at 106 Pin Oak Drive were installed in the new church. Other items like the Stations of the Cross and sacred art will be brought in and installed, the pastor said. Permanent seating at the new location is the same as the old church, 175, but the Main Street location has more room to add up to 88 chairs to increase seating.

A social hall is attached to the church and will be used for parish activities, music lessons and catechism lessons.

Father McCambridge said the old church has been valued at $275,000 and will be sold to pay off the diocesan loan.

Bishop Anthony B. Taylor began at the dedication service at the gates of the sanctuary, where he prayed in Latin. He sprinkled holy water inside and outside the church. A mass followed, celebrated by Father McCambridge. Bishop Taylor and Father Martin Seibold, pastor of St. Jude’s Church in Jacksonville, attended the mass. The dedication and the mass were in Latin, except for the reading of the Gospel, the homily and a hymn which were in English.

The dedication was special for Father Greg Luyet, pastor of Our Lady of Good Counsel Church in Little Rock. His late grandfather, Brother Jack Rainwater, pastored the founding church there, Bethel Missionary Baptist Church, in the 1970s. The cornerstone still bears the name of the church and the year it was built. , 1972.

Elder Rainwater had a severe heart attack and died in 1978.

“I spent every other Friday night at their house (opposite the church) to visit and a few days during the summers. It was always a pleasure to visit both grandparents. I remember my grand -Father preparing his sermons in the office and watching him work outside. I was very young when he died, but I have many fond memories of the parsonage, the church and the town,” Fr. Luyet said. .

He said he remembered the kindness his grandfather showed residents when a tornado destroyed parts of Cabot, and he opened the church to the Red Cross to serve the community.

Father McCambridge said the Latin Mass community now includes families from three generations. At the dedication and mass, 40% of the attendees were secondary school children and younger. The needs of breastfeeding mothers are prioritized with four chairs with movable partitions on either side of the church where they can breastfeed.

The pastor believes the new location will attract more parishioners as there will be plenty of seating at all Masses.

One of the families with three generations are the Naumans.

“It’s a blessing,” Michael Nauman said of the new location, “because other Latin Rite parishes have told us that once you’re established, you’ll grow. We see people I grew up with and their kids coming in, and then new people too.