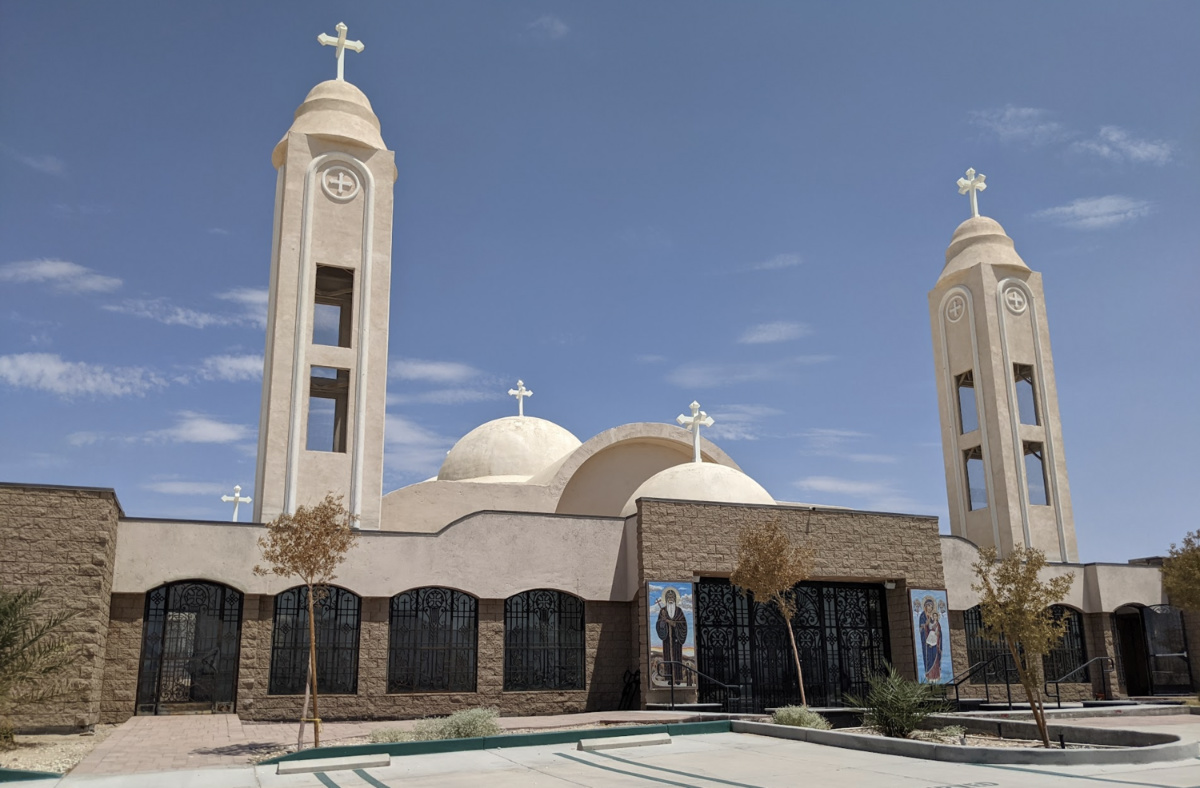 Nearly 2,000 years ago, in the eastern desert of Egypt, Saint Anthony the Great retired to the desert, a pioneer of monastic asceticism. According to the accounts, he faced the devil in the wilderness as Jesus did. In the late 1970s, two young Coptic Orthodox Christians from California – far from Egypt – embarked on the same spiritual journey.

Today, 24o kilometers east of Los Angeles, in an otherwise undeveloped desert, the first Coptic monastery in the United States – and the second in the world outside Egypt – offers the monastic tradition of Egypt to America.

After nearly two years of isolation during the coronavirus pandemic, Saint Anthony’s Monastery is once again welcoming small groups of pilgrims to participate in the traditional Coptic liturgy in a setting resembling the church’s homeland.

The Copts have long esteemed the desert for its spiritual resonance. Amidst the sand and harshness of nature, one might more closely encounter the sovereignty and provision of God.

The most recent and nationally representative data from 2008 estimate the number of Coptic Christians in Egypt at around four million. However, it does not reflect the population movements following the Arab Spring. According to the estimates of the Coptic Orthodox Archdiocese of North America, there are more than 250 Coptic Orthodox churches in the United States.

The most recent and nationally representative data from 2008 estimate the number of Coptic Christians in Egypt at around four million. However, it does not reflect the population movements following the Arab Spring. According to the estimates of the Coptic Orthodox Archdiocese of North America, there are more than 250 Coptic Orthodox churches in the United States.

Eleven kilometers on a dirt road, swallowed up by sand on each side, the dome of St Antony’s church emerges from behind a metal gate. Beyond its doors, another dirt road gives way to palm trees, bushes, rows of solar panels and a few experimental greenhouses. A wooden sign urges caution: â€œScorpion, snakes, cacti. Watch your children. While driving, watch out for soft sand “.

As the sun rises on the horizon, monks dressed in white robes remove their shoes, kneel, and enter the shrine for a 6 a.m. liturgy. Intricate red carpets fill the space between two rows of chairs, and icons of saints line the perimeter of the room.

At the back of the room, facing the altar, a sanctuary dedicated to Saint Anthony represents him holding Matthew 19 in Arabic script. â€œJesus said to her, ‘If you want to be perfect, go, sell your goods and give to the poor, and you will have treasure in heaven. So come, follow me â€, we can read.

Hearing this scripture, Saint Anthony, heir to great wealth, created an endowment for his sister, gave up her riches and retired into asceticism in the wilderness. While some other traditions disagree, the Coptic Church views Saint Anthony as the first monk and codifier of monastic rules.

His retreat into the desert, the temptation of the devil and the eventual establishment of an ascetic community made him a central figure in Christian history and one of the first Fathers of the desert.

With Saint Paul of Thebes and Saint Pachomius of the Thebaid, Saint Anthony of Egypt conformed his spiritual life to Christ’s example of self-denial, poverty and service.

â€œIt’s not that the devil isn’t here,â€ said deacon Pavli al-Antony, a leader of the monastery. â€œYou can live a holy life in Las Vegas or in a desert monastery, and you will be tempted. But we believe there is spiritual value in cultivating a life of prayer here as Saint Anthony did in Egypt. 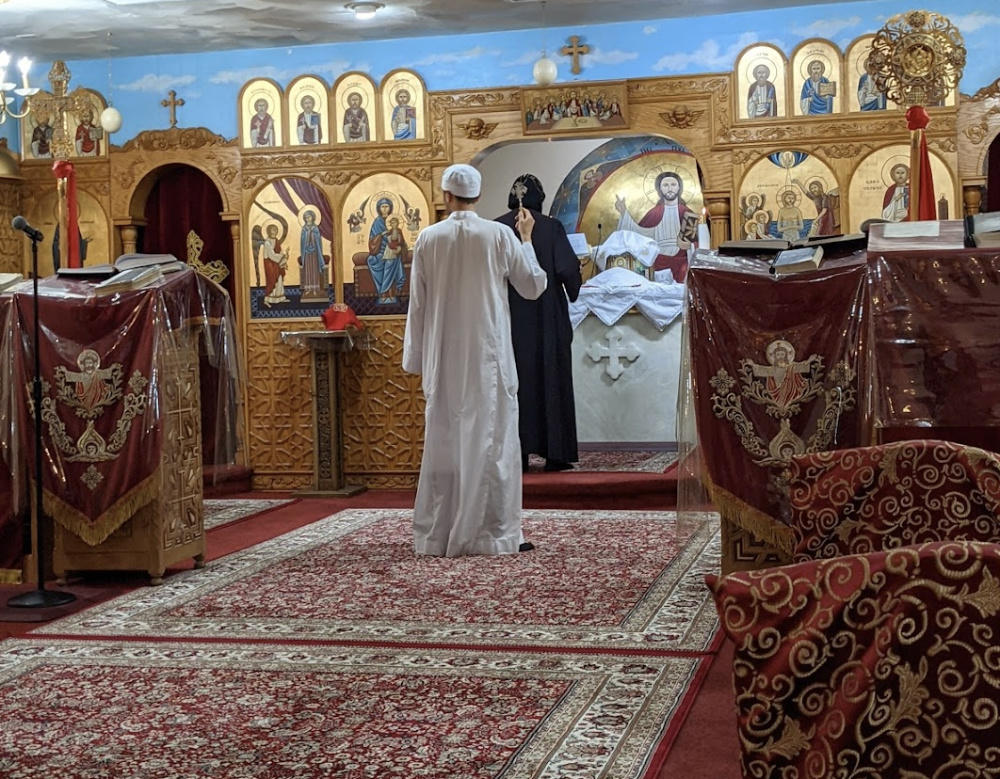 A monk holds a cross and looks at an icon during the liturgical service. Photo: Liza Vandenboom Ashley.

In 1969, Reverend Bishoy Kamel left his home in Alexandria, Egypt, and made the treacherous journey to St Mark’s Church in Los Angeles, California, one of the few Coptic churches established in the United States. at the time.

When sending former Coptic Pope Kyrillos VI, Kamel came to reinvigorate the local church with Egyptian spiritual traditions. He performed liturgies with precision and brought the ethos of Alexandria to a sparse Coptic community in California.

Looking at his ministry, two young people felt the call of monastic life. Atef Ishak and Magdy Saad, both from Egyptian families, wanted to devote their lives to prayer and ascetic discipline, but the only Coptic monasteries sat on the other side of the globe.

One morning, a member of the committee of St. Mark’s Church, the administrative body responsible for logistics and oversight, was sitting at his breakfast table with a copy of the Los Angeles Times. An ad for 20 acres of land in the Newberry Springs, California desert caught his eye.

Treeless, surrounded by rolling sand and far from any urban development, the land appealed to the Coptic tradition of desert asceticism. With no roads to access the land, Reverend Arsenius Aziz of St. Mark’s Church surveyed the land in a helicopter. When the seller discovered that potential buyers were looking to turn the land into a monastery, he lowered the cost from $ 30,000 to $ 10,000. Adjusted for inflation, the discount now stands at just over US $ 122,000.

In 1973, after having bought the land, Kamel and the two young men whom he inspired to monasticism took the first open-air liturgy. There were no buildings or trees in sight – only rolling sand and the promise of a spiritual oasis.

This climactic moment has turned into years of apparent stagnation. Much of the land has remained dormant, with no buildings, plants or practicing monks on the property.

But in 1977, the Coptic population of California came to a turning point. Former Pope Shenouda III made the first Coptic papal visit to the United States, stopping in Newberry Springs to dedicate St. Anthony’s Monastery.

After his visit to the arid land, Shenouda returned to Alexandria engaged in the potential of the monastery. He met an awesome man by the name of Antonious Markos, who ran a successful ministry in South Africa with no formal ministry education.

The Coptic Church awarded Markos a scholarship to study at Fuller College in Los Angeles. Before expelling him, Shenouda commissioned Markos to lead the development of the monastery.

Markos has partnered with St Mark’s Church to raise over US $ 110,000 for the new monastery. Physical donations and volunteer work, as well as cash donations, poured in from the small Coptic community in Southern California. Three months before the Feast of Saint Anthony in 1988, construction of the Saint Anthony Church at the epicenter of the monastery was completed.

When news of the completed project reached Shenouda in Alexandria, he sent four Egyptian monks to germinate monastic life in California. 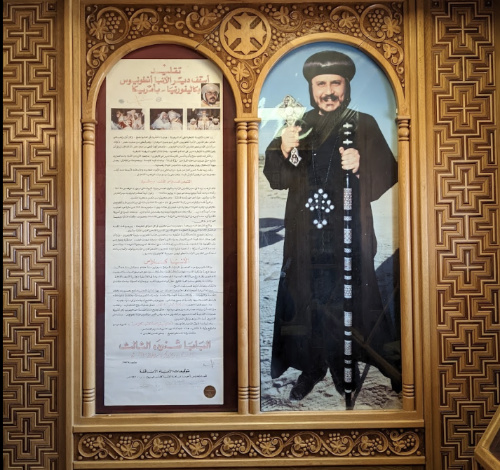 Bishop Karas, an ascetic and monk who served as the abbot of the monastery, is commemorated at Saint Anthony Monastery. He was the first bishop of the Coptic Orthodox Church in the United States. Photo: Liza Vandenboom Ashley.

After decades of staccato progress, St. Anthony’s Monastery has become a beacon for Coptic pilgrims to America. Before the pandemic, the monastery received more than 5,000 visitors in some months, according to Reverend Marcus al-Antony, monk and historian of the monastery.

The two-hour liturgies performed with traditional robes, chants, and a mix of Coptic and Arabic languages â€‹â€‹bring the spiritual traditions of Alexandria to the Copts far from their ancestral home.

â€œOur faith was born in the desert, and there is something important about practicing it here in the way of our ancestors,â€ said Pavli al-Antony. â€œPeople want to be a part of it. ”

As California restrictions eased, the monastery resumed welcoming small groups of visitors for liturgy and prayer in late June.

Relying entirely on the generosity of the Coptic community to forge a life in inhospitable conditions, the monastery has made efforts to become more self-sufficient. Recently, she installed rows of solar panels and started experimenting with greenhouses to grow her own food.

Anyone looking for spiritual renewal or wishing to visit a relic of Saint Anthony can schedule a visit to the monastery. Be aware that this is a tumultuous drive through dirt roads and sand dunes – without cell phone service and with the occasional rattlesnake. The difficult pilgrimage is part of the experience, said Pavli al-Antony.

Women should wear loose pants or dresses that reach at least knee length and tops that cover their shoulders and elbows. Men should avoid shorts, tank tops, and overly casual clothing. All visitors must wear masks during the liturgy and inside.

Men and women are seated on either side of the hall during the two to three hour liturgy. Depending on when you come, you might be the only visitor. While the liturgy is usually performed in a mixture of Coptic and Arabic, when pilgrims come, the priest usually adds English to the mixture.

On LGBTQ + rights, the bishops of Ghana choose to ignore the Pope