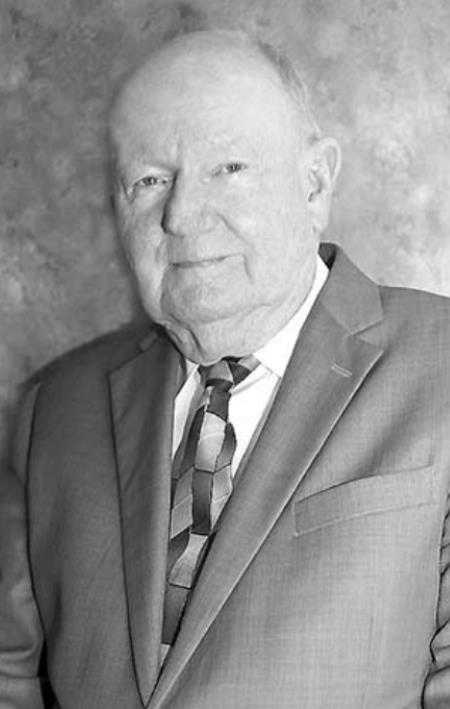 He was born on December 29, 1938 in Marland to Tillie Freeman Sanders and Dell Lee Sanders, Sr.

He graduated from Marland High School, then joined the United States Navy on September 2, 1956, where he proudly served as Petty Officer 2nd Class AMH on the USS Kearsarge, CV-CVA-CVS-33.

After his release in December 1959, Rusty attended Gupton-Jones College of Mortuary Science in Dallas, Texas, and began working at Sevier Funeral Home in Chickasha.

It was there that he met the love of his life, Frances Ellen Mills, and on September 14, 1963, at Holy Name Catholic Church, they began their lives as husband and wife.

On September 2, 1967, Rusty and Fran made their home in Kingfisher.

Rusty and Fran have built a life of service to others and instilled it in their children.

Together they served Sts. Peter & Paul Catholic Church and School, where he was a member of the Knights of Columbus, school board and church council. He was Eucharistic minister for many years.

Rusty was a volunteer men’s basketball coach for 19 years and he also coached the Kingfisher Little League for five years.

His concern for the people of the community was evident in the dignified and loving manner in which he cared for the loved ones of the deceased.

He was proud to carry on the legacy of Arthur Bracken, the first funeral director in the State of Oklahoma, and his skills as an embalmer are legendary.

Rusty and Fran bought the local funeral home and it became Sanders Funeral Service, Inc., with an emphasis on “service.”

The Oklahoma State Funeral Directors’ Association awarded him the Lifetime of Service Award, for his 50+ years of funeral service in the state.

Rusty was predeceased by his parents, brother, Bob Willingham, and the love of his life, Fran.

He is survived by his children, daughter Lori Jech of Wichita Falls, Texas, son Chad Sanders and wife Shelley of Kingfisher, daughter Nichole Copeland and husband Steven of Mustang, son Rep. Mike Sanders and his wife Nellie from Kingfisher, and his son Chris Sanders from Tulsa.

He is also survived by his sisters, Bonnie Bamberg and Leota Meyers of Kingfisher, and Shirley Jefferson of Arkansas.

And he is also survived by three nieces, Cynthia Jefferson, Stephanie Cline and Traci Borden; three nephews, Tom Jefferson and Robert and Richard Willingham, and a host of great-nieces and grand-nephews. A Celebration of Life took place at 3 p.m. on Wednesday, November 3 at LifeWay Church in Kingfisher.

The Christian Burial Mass will be held on Thursday, November 4 at 10 a.m. at Sts. Peter & Paul Catholic Church in Kingfisher, with interment in Kingfisher Cemetery, under the direction of Sanders Funeral Service.

COP26: Believers demand climate justice for the most vulnerable