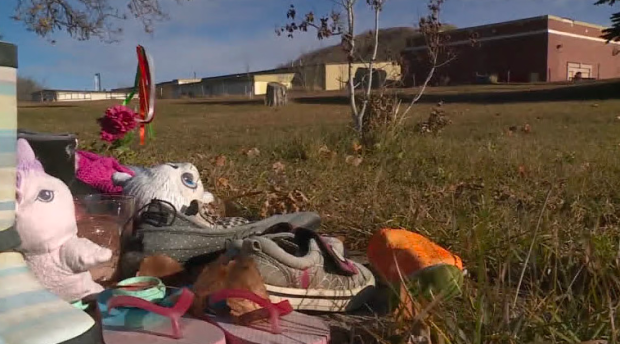 TORONTO – A Saskatchewan First Nation prepares to find human remains as the search for anonymous graves begins near another former residential school, which survivors have told stories about for years.

On Monday, the Star Blanket Cree Nation will begin searching the area around the Qu’Appelle Industrial Residential School in Saskatchewan with ground-penetrating radar.

The pain of this job is already being felt, says chef Michael Starr, who plans to have therapists on hand.

â€œThe emotions will be brought back and we wanted people to be there in case that happened,â€ Starr told CTV News.

â€œWe have a strong indication that we will find remains in our area. “

Since 215 unmarked graves were confirmed at Kamloops Indian Residential School last spring, more than 1,000 unmarked graves have been found near former residential schools across the country, with only a fraction of the schools excavated.

Starr explained that the elders will be present at the start of the research, along with contractors and community members, and that the lands will be blessed before the ground penetrating radar begins.

Several locations on the school grounds and surrounding areas will be searched using technology.

There is no cemetery in the community except one next to the local church in the center of town.

Research sites will be based on testimonials from former students and alumni who have witnessed or heard stories of what happened at the institution.

Starr said there are stories of “dungeons” where the students were taken and of hidden passages “to do what they did and take some of our people to different areas.”

“I saw a space where it was covered, and right now it’s sunk where we were told [residential school workers were] probably by taking our kids out there to do the unthinkable things that we ended up figuring out they did, â€Starr said.

The Qu’Appelle Industrial Boarding School, sometimes referred to as Lebret School or Saint Paul School, operated from 1884 to 1998 and was primarily run by the Roman Catholic Church.

According to the Truth and Reconciliation Commission report, the Qu’Appelle School had a high student mortality rate. Just nine years after it opened, the school reported firing 174 students, 71 of whom have died.

Residential school survivor and veteran Fred Gordon died in October, but in an interview with CTV News five years ago, he recalls sneaking up at night to escape the mistreatment of a nun, to attend something much worse.

â€œWhen I was walking this path I fell into this hole about three feet deep and it was the flower bed,â€ Gordon said. “I seen this priest go by and he had something draped over his shoulder, carrying something, and they went into that hole and threw him in there.”

Ethel Dubois says she is ready for the truth to be discovered. She was forced to attend the facility in 1961 at just five years old, spending 11 years there.

â€œWith my own tradition and culture, I was able to overcome much of the emotional impact,â€ she told CTV News. â€œI am saying that I am on the right track to be healed. “

She suffered multiple forms of abuse at Qu’Appelle School, including physical and sexual violence, and was not allowed to see her siblings in the same building.

â€œI was always alone because my other siblings were always in a different part of the school,â€ she said. “I felt separated from my family – being the youngest in my family – I needed them.”

Dubois has been part of the research planned from the beginning, working as an elder as well as “being part of their support team as a mental health therapist”.

â€œFor me, I’ve been through all of my healing and it’s very easy for me to talk about my experiences,â€ she said.

But many survivors still struggle with the trauma of their abuse in Canada’s residential school system today.

Starr said he grew up with family and community members who had been deeply touched by their time at the residential school, but had only been able to talk about it relatively recently.

â€œThey drank a lot of alcohol to try to erase that memory,â€ he said.

Her father attended residential school and it affected her relationship with her family.

â€œHe didn’t tell us much about it, but we saw and felt the impacts at home,â€ Starr said.

â€œThey think about when they went to residential school and what happened to them,â€ Starr said. â€œIt is a very emotional time for our community.

In addition to research in areas directly near the old school, research will also be carried out around a nearby cemetery in Lebret in the future. Scans are also planned across a lake where a missionary once stood.

The digitization process will take place in three phases and could take up to three years.

Starr said if any remains were located they planned to build a cemetery in this area and mark the location of the graves.

â€œIf they are buried now, this is where they should stay,â€ he said. “This is what we are going to do and respect what our elders [â€¦] told us.