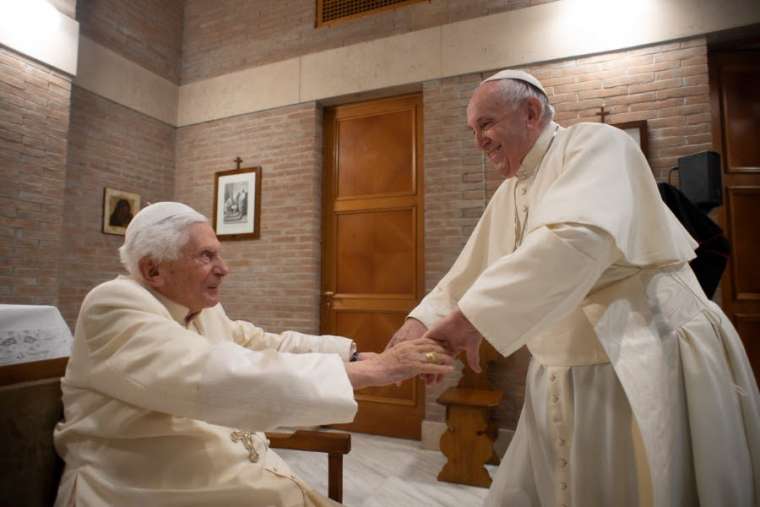 Pope Francis thanked Benedict XVI on Tuesday for his continual prayer for the Church in his retirement, calling the Pope Emeritus “the contemplative of the Vatican”.

Speaking from the window overlooking St. Peter’s Square from the Apostolic Palace during the Solemnity of Saints. Peter and Paul, the Pope congratulated Benedict XVI on the 70th anniversary of his priestly ordination.

“Today marks an anniversary that touches us all: 70 years ago Pope Benedict was ordained a priest,” Pope Francis said in his Angelus address broadcast live on June 29.

“To you, Benoît, dear father and brother, our affection, our gratitude and our closeness go.”

The Pope noted that Benedict XVI now lives in the Mater Ecclesiae monastery within the walls of Vatican City.

“He is now the contemplative of the Vatican, who spends his life praying for the Church and for the diocese of Rome, of which he is bishop emeritus,” said Pope Francis.

The ordination and the first mass of the future Pope Benedict XVI, Joseph Ratzinger, took place in Bavaria on June 29, 1951.

Ratzinger, 24, was ordained a priest of the Archdiocese of Munich alongside his brother, Georg, in the Co-Cathedral in Freising, Germany.

Archbishop Georg Gänswein, personal secretary to Benedict XVI, told EWTN that the Pope Emeritus offered Mass privately in the Mater Ecclesiae Chapel to mark the occasion. At 94, Benedict XVI does not have the strength to make a public appearance, said his secretary.

Six members of the choir from Regensburg, Germany, of which his late brother was the choirmaster, were present at mass “to sing a beautiful mass by a German composer,” said Gänswein.

In Pope Francis’ Angelus address, he declared that the two saints were “protagonists of the Gospel” who “spent their lives for the Lord and for their brethren”.

“How many times, for example, do we say that we would like a Church more faithful to the Gospel, closer to the people, more prophetic and missionary, but then, in practice, we do nothing,” he said. declared.

“It is sad to see that many speak, comment and debate, but few testify. Witnesses are not lost in words, but rather bear fruit. Witnesses do not complain about others and the world, but they start with themselves.

A special Marian prayer for peace in Myanmar