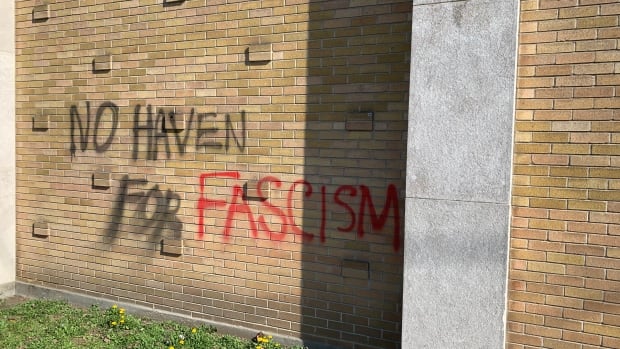 Ottawa police are investigating what they call hate-motivated mischief at a church in the city’s Vanier neighborhood on Sunday morning.

Photos sent to CBC News show the words ‘No paradise for fascism’ and ‘f—off fascists’ spray-painted on the capital’s Bikers’ Church, where a Rolling Thunder Rally-related service was due to take place on Sunday morning.

Police were alerted to the graffiti at 7 a.m. ET and are seeking information regarding the incident. The police hate crime unit is investigating.

Police are investigating an incident of hate-motivated mischief at a religious institution located in the 100 block of Carillon Street that was reported to us just before 7am this morning. The investigation by the Hate Crimes and Bias Unit is ongoing. Info? 613-236-1222 #ottawa #ottnews pic.twitter.com/GPYeCNFyd3

According to Ottawa’s By-Law Department, 761 parking tickets were issued this weekend in connection with the protest.

In addition, 39 vehicles were towed and 10 tickets were issued for violations such as noise, smoking and urination in public.

Ten people have been arrested by the police since Friday morning.

Organizers of this weekend’s events indicated before they arrived that they planned to leave town on Sunday after the church service, according to Ottawa police.

Several downtown on-ramps will remain closed on Sunday morning, police said in a news release the closures helped minimize the rally’s impact on the city’s downtown area on Saturday.

“Several convoys and groups have been spotted outside of the city. Our intelligence gathering indicates that many convoys have chosen not to come to Ottawa due to the operational posture of police,” the Saturday statement said. evening.

Organizers changed their planned route on Saturday morning but notified police of the change, police said. They estimated that 350 motorcycles took part in the race.

Charles Bordeleau, a former Ottawa police chief, told CBC News the police response has been effective, with officers maintaining control of downtown. He called this a significant change from what was seen in February.

“[Police] had a plan and they executed it,” he said. “They had the resources, not only from a police perspective, but they also had the right equipment.

Christine Leadman, executive director of the Bank Street BIA, said many in the community still felt uneasy and several businesses opted to remain closed over the weekend.

“Business is down but, at the same time, there is less tension,” she said. “So we’re happy with how the police handled things this time.”

But Bordeleau said the policing model being used — which involves bringing in the RCMP, OPP and other police departments — is not sustainable if similar protests become regular.

“So they’re going to have to rethink how they handle this and how to reframe the policing model to accommodate a potentially new approach to protesters.”

“We are going to leave right after”: participant in the rally

A protester draped in a Canadian flag at the National War Memorial told CBC on Saturday that the event was not a protest, but a rally for veterans.

“We will leave right after. We give honor and respect to this country.”

This weekend’s events are organized by several people who participated in the occupation of the streets of the city for weeks during the self-proclaimed freedom convoy earlier this year.

While many mask mandates and other COVID-19 health restrictions have been lifted, some participants focused on those that remain, including the requirement for many federal employees to be vaccinated and those for air travel.

“I still can’t get on a plane. So I still can’t travel, which is concerning because it’s a free country,” said David Paisley, who promoted the weekend’s events via YouTube. .

Police made 10 arrests in the first two days of the rally with several charges related to people breaching bail conditions that require them not to enter the city, stemming from earlier charges at the of the Freedom Convoy demonstration in February.

One of the police’s main goals on Sunday will be to ensure that a separate charity walk and bike event – ​​CN for CHEO – goes ahead as planned, the statement said.

The all-day relay is scheduled to depart from the National War Museum at 10 a.m. ET to raise funds for the care of children with cancer at the Children’s Hospital of Eastern Ontario in Ottawa.

On its website, the event says it does not believe the rally will affect its schedule.

“We want to assure our attendees that we have worked closely with the Ottawa Police Service and are grateful for their work in ensuring the event runs smoothly and safely.”