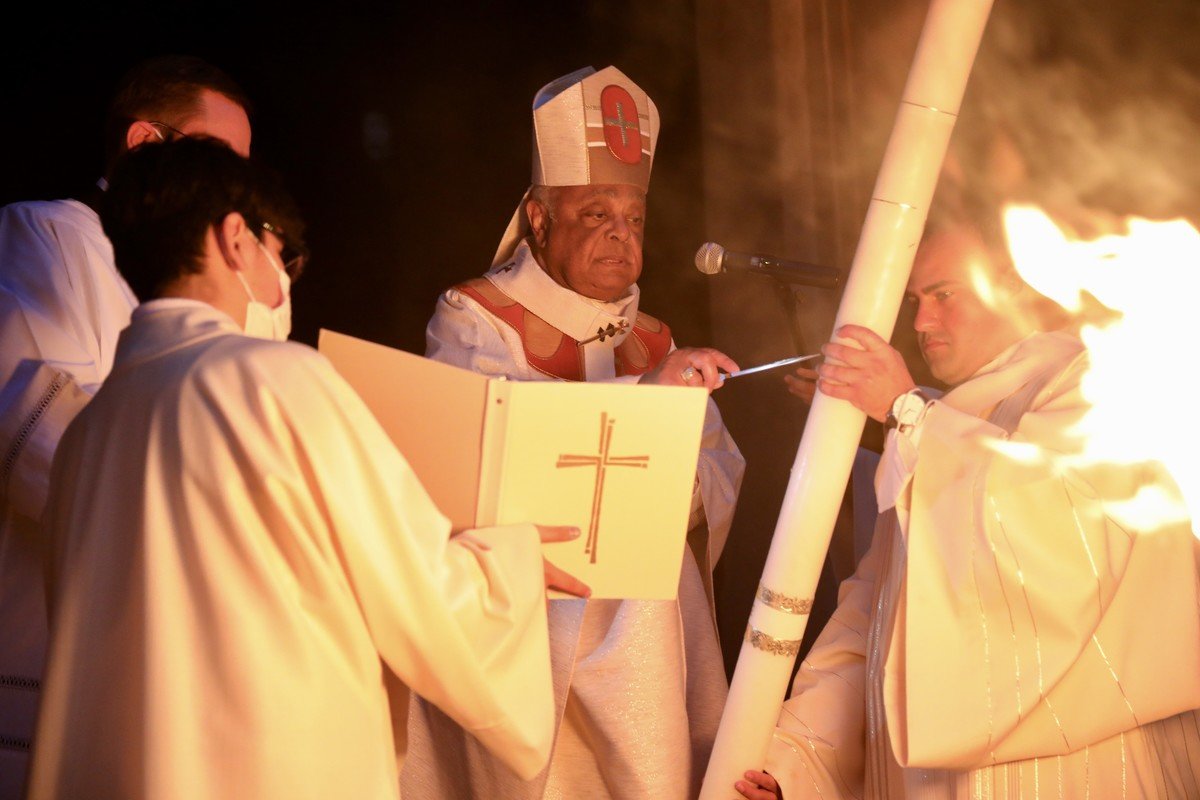 At a joyous Easter Vigil at St. Matthew the Apostle Cathedral on April 16, 2022, and then at Easter Sunday Masses the following day, Washington Cardinal Wilton Gregory led the Roman Catholic Archdiocese of Washington in celebrating the resurrection of Jesus and the new life and hope that the risen Christ brings to the world. (Catholic standard photos/Andrew Biraj)

Easter Vigil
The dramatic April 16 Easter Vigil at St. Matthew’s Cathedral began with Cardinal Gregory blessing a fire outside and the Easter candle being lit. Later, in the darkened cathedral, people’s candles were lit one by one, symbolizing the light that the risen Christ brings to the world. A visible sign of the new life brought by the risen Christ came during the vigil when people were baptized, confirmed and received communion by becoming full members of the Catholic Church. At the cathedral that night, 19 people received the sacraments of initiation, and they were among 824 people in churches in the Roman Catholic Archdiocese of Washington receiving these sacraments for the first time. (SC Photos/Andrew Biraj)

Easter Sunday Mass
During Easter Sunday masses on April 17 at St. Matthew’s Cathedral and later that day at the Basilica of the National Shrine of the Immaculate Conception (pictured below), Cardinal Gregory said the story of the The risen Christ continues to change hearts and bring new life to people today. He said those who became full members of the Catholic Church at the Easter Vigil are signs of this new life, and he welcomed them into the Archdiocese’s family of faith. (SC Photos/Andrew Biraj)

As he proceeds from the altar at the end of Mass, Washington Cardinal Wilton Gregory blesses the congregation attending Easter Sunday Mass April 17 at the National Shrine Basilica of the Immaculate Conception. Earlier that morning, during his Easter Sunday Mass at St. Matthew’s Cathedral, the Cardinal concluded his homily by saying, “In my name and in the name of the Archdiocese of Washington, enriched today by our new Catholics, I wish you and all the faith communities of this local Church a happy and holy Easter season. (Standard Catholic Pictures by Andrew Biraj)

Minister of Omaha forgives the thief and changes his life

How American Youth Lost Their Religion in the 1990s