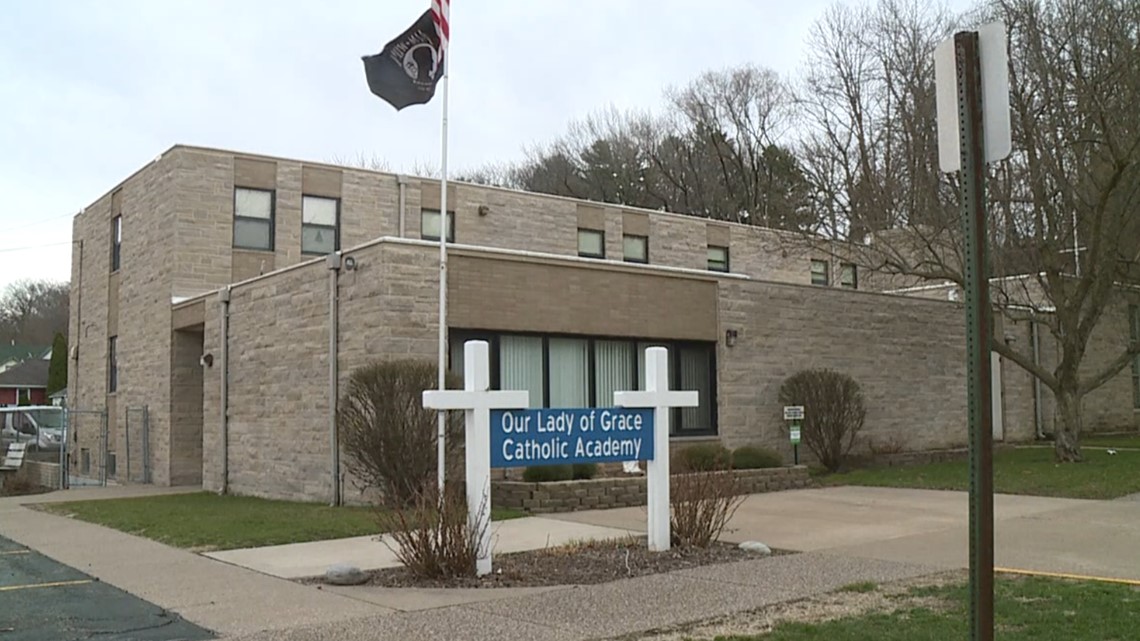 Parents say they were blindsided by an announcement from the Catholic Diocese of Peoria saying the school would close at the end of the 2021-22 school year.

EAST MOLINE, Ill. — Parents and parishioners gathered to confront administrators, vowing they would find a way to keep Our Lady of Grace Catholic Academy open, following an abrupt announcement from the Catholic Diocese of Peoria that the school would close at the end of the 2021-22 academic year.

The meeting came just days after the diocese broke the news to staff and students. by email, with a local pastor saying money and enrollment numbers were to blame. The parents, on the other hand, argued that they had not been warned that the school was in trouble and pleaded with the diocese to find an alternative to closing the academy.

The diocese made the announcement April 8, saying OLGCA staff and students are encouraged to transfer to Jordan Catholic School or nearby Seton Catholic School. The restructuring was necessary to support and strengthen Catholic schools in the region in the wake of the COVID-19 pandemic, the email said.

RELATED: Our Lady of Grace Catholic Academy to Close After 2021-2022 School Year

“As we enter (into) the holiest time of the year with Holy Week, the Triduum and Easter next week, the timing of this communication is not optimal,” the e-mail read. mail. “However, the Catholic Schools Authority wishes to be transparent in sharing this important news now that decisions have been made.”

You can view the full statement here.

On Monday, April 11, approximately 50 parents, grandparents and guardians gathered at the OLGCA to demand answers from administrators. Several had heard that the diocesan superintendent, Dr. Sharon Weiss, was supposed to be there to address the students, although she never showed up, citing a doctor’s appointment.

He revealed that the decision to close the doors of the OLGCA had only been made the previous week and that the school had struggled with finances and enrollment numbers.

“Obviously it breaks my heart to see what’s going on,” said Sanderson, who served as director from 1994 to 2001. “Who knows, God is ultimately responsible. Maybe in the grand scheme of things, something is going to change in the future.”

But the mood in the crowd was less thoughtful, with many saying they felt caught off guard by the announcement.

“We were blindsided by this. We weren’t told what to do,” Clifton VanWinkle said. He has a fourth and sixth grader at the OLGCA. “We are a family. It’s like our family is being torn apart and we’re being told where to go.”

Jessica Vervecke, Chair of the OLGCA Education Committee, read a statement on behalf of the families gathered.

“We are heartbroken that our beloved school is closing its doors after 98 years of Catholic education in East Moline. We are confused as to why the decision was made and how it could be communicated in such a ruthless way , without compassion or empathy towards students and teachers came out (of) Covid,” Vervecke said. “We feel abandoned, unimportant and not part of the universal Church.”

Vervecke’s family has been part of the OLGCA for five generations, with his grandmother working as the school’s secretary for 35 years.

She said while the other Catholic schools in the area are “wonderful options,” they won’t be able to compete with the OLGCA, which is one of the only private schools in the area to offer full-day kindergarten. . Other parents cited small class sizes and long-serving teachers as some of the school’s irreplaceable advantages.

“It’s a very special place for many, many people. It will be a great loss in our lives if he disappears,” Vervecke told News 8. end something that has been part of this community for decades, in a week.”

Eventually Reverend James Pallardy joined the meeting to help answer questions. Pallardy is the head of St. Anne’s Catholic Church, the home parish of the OLGCA.

He said that in 2015, a trust fund of $750,000 was donated to the parish. For the past five to six years, this trust had been used to pay for St. Anne’s assessment at the OLGCA to keep the school open.

“That confidence is exhausted after this year,” Pallardy said. “With the continued decline in enrollment here at Académie Notre-Dame de Grâce and the rising costs of funding Catholic education, Sainte-Anne can no longer continue to drain our resources or risk bankruptcy.”

Anne’s parish bulletin said the church’s Monsignor William J. Cleary endowment fund had grown to $628,662 as of December 31, 2021. However, Pallardy warned that the school could not dip into those funds to cover their financial needs.

“Once you tap into a main endowment, you’re looking at the end of the school, as far as funding goes,” Pallardy said.

The news came as a shock to most parents and parishioners gathered, including some who had served on school and/or church financial boards, who say they have never heard of the $750 trust fund. $000.

“We had no idea this fund existed. There were parishioners here today who were unaware of its existence,” Vervecke said. “We certainly weren’t made aware that this fund is running out and we only have this amount of money left. The rest is up to you.'”

She argues that if the parish had known since 2015, plans could have been made to help raise money for the OLGCA, highlighting how students, staff and parents raised $32,000 in a fundraiser virtual last year.

“Even if we had known a year ago, there is something that could have been done,” Vervecke said.

It was Peoria’s newest bishop who helped make the decision to shut down the OLGCA, Pallardy and Sanderson said.

His Excellency, Bishop Louis Tylka, became the ninth Bishop of the Catholic Church’s Diocese of Peoria in early March and held his first Mass on Sunday, March 6.

“He didn’t even come here,” VanWinkle said. “How can you shut this down when you haven’t been here? Come here, talk to us, tell us what to do. And then shut us down if we fail.”

Although the diocese has not commented on specific reasons for the OLGCA’s closure, Pallardy and Sanderson said Bishop Tylka is from Chicago where schools typically need at least 200 students to stay open.

The OLGCA started the 2020 school year with 158 students, but that number has since dropped to 111 students, Pallardy and Sanderson said.

However, several parents have stood up to argue that these numbers are not fair, saying the pandemic and online learning have impacted private school enrollment numbers across the country.

“Which Catholic school was marketing or attracting people during the pandemic,” Vervecke asked.

Now several parents say they will not transfer their students to the other two Catholic schools, while others have told News 8 they are considering leaving the diocese altogether.

“It’s heartbreaking. It’s not nice and it’s not transparent. They don’t have the strength to take us face to face,” Michael DeSplinter said. His eldest is in grade five at the OLGCA and he and his wife had planned to send their 15-month-old daughter to school as well.

DeSplinter estimates that his family spent a combined 150 years, across three generations, in school.

“We love the school. The school does a lot for this community. And now, in the blink of an eye, it’s gone,” DeSplinter said.

“We’re a big family. It’s destroying our family,” he told News 8. “It’s absolutely tearing us apart. But we’re staying strong, I hope they turn things around. But I doubt it. strongly.”

Diocesan officials told the gathered crowd that all they could do was write an email to the diocesan superintendent, Dr. Sharon Weiss, as well as Bishop Tylka.

That’s not a good enough answer for VanWinkle, but he says he’s willing to do whatever it takes to keep the OLGCA open.

“We are fighting for our school. We are not going to give up,” he said. “How do you look your kids in the eye and say, ‘Hey, where do you want to go to school next year?'”

Vervecke agreed, saying she would go door to door asking for money if she had to.

St. Anne and the diocese declined News 8’s requests for comment. Instead, Dr. Weiss told News 8 that his official response would eventually be published in the diocesan newspaper, The Catholic Postbut did not respond when expected.

If you or someone you know has any questions regarding the OLGCA closure, you are encouraged to contact Superintendent Dr. Weiss at sweiss@cdop.org; Associate Superintendent Jerry Sanderson at jsanderson@cdop.org; or call the diocesan office directly at (309) 671-1550.

What do we mean by “Hopewell Ceremonial Earthworks?”

Bishop ‘horrified’ by Brooklyn shooting, asks for prayers for injured and first responders