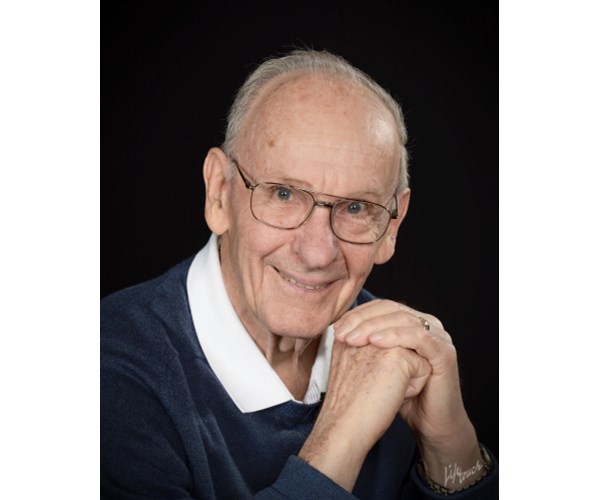 Anacortes – Born December 30, 1933 in Seattle; died September 12, 2021 in Anacortes, WA. Vic grew up in West Seattle, attending Holy Rosary Elementary School and O’Dea High School, class of ’51. He attended Gonzaga University and served two years in the United States Army. His professional career has been in the banking industry, starting with West Side Federal Savings, and retiring from Wells Fargo Bank. He was a member of the West Seattle Chamber of Commerce, Rotary, and the Seattle Sea Fair Commodores. He loved golf and bowling and was a huge fan of the Mariners, Seahawks and Gonzaga Bull Dogs basketball teams.

Vic was the loving father of Mary Bell (Paul), Diane Scruggs (Darren), Patti Eisenhauer and Susan Denney (Richard). He was predeceased by his wife of forty, “the dawn of his life.” They spent wonderful years traveling the world with the Seattle Commodores, living in condominiums in Hawaii and Mexico, and later traveling to California by RV each winter to soak up the sun and golf. In the latter part of their marriage, Dawn was diagnosed with Parkinson’s disease, with Vic becoming her primary support and caregiver throughout her illness.

He was “Dad” to twenty grandchildren and twenty-eight great grandchildren, and Uncle Vic to many nieces and nephews. Some of his happiest times have been around these young people. Vic is survived by his sisters Fern Lebel, Rita Ingram (Wes), Toni Edmons (Bob) and predeceased by brothers Thomas Lebel and Stephen Lebel. Vic was a good-natured, fun-loving man. He just liked being around people, especially his family and friends. He was always happy to see you and caring to remember others.

As a life member of the Catholic Church, a funeral mass will be celebrated on Tuesday, September 21 at 1 p.m. at St Mary’s Church in Anacortes, WA, followed by internment at Fernhill Cemetery. There will be a visit to the Evans Funeral Chapel on Monday, September 20 from 2 to 5 p.m. and a screening and recitation of the Rosary will precede the funeral mass.

Souvenirs can be made at Northwest Hospice, Parkinson’s charities or a charity of your choice.