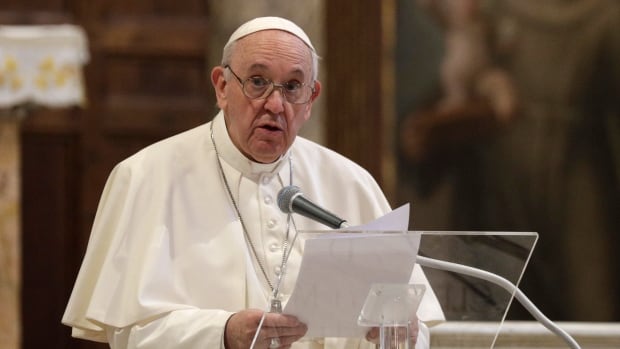 Elected officials in St. Catharines, Ont., And over 100 Catholic educators and school staff in Niagara call on Pope Francis to apologize for the discovery of anonymous graves at the sites of former residential schools in British Columbia and in Saskatchewan.

Liberal MP Chris Bittle, NDP MP Jennie Stevens and Mayor Walter Sendzik on Tuesday sent a letter to Gerard Bergie, the Bishop of St. Catharines, asking him to demand an apology from the Pope.

The letter says that Bergie’s voice, along with other bishops, can “ensure that the Catholic Church recognizes its role in the residential school system and advances our steps on the path to reconciliation.”

Bittle said in an interview Wednesday morning that this is an opportunity for politicians to “use our voices”.

A letter from Mayor Sendzik, Jennie Stevens and myself to Bishop Bergie of the Diocese of St Catharines. pic.twitter.com/StNgNc3hEp

Their appeals were also compounded by a letter signed by 117 educators and staff from the Niagara District Catholic School Board.

â€œFailure to accept this responsibility will only exacerbate the pain and suffering of these families and tarnish the image of the Church,â€ the letter read.

â€œWe ask the Church to act in the way Jesus taught us and how we do our best to teach our students to act, with honor, integrity, love, and in the image of Christ. “

This is an open letter signed by 117 Catholic educators in Niagara to the Catholic Church regarding residential schools in Canada. Please share. If I tagged you, it’s because you have a platform to help spread the word. Thank you. (1/2)@GrantRants @CHCHNews @NiaFallsReview pic.twitter.com/PzY55AsRq0

Andrew Chase, a science teacher at Saint Michael’s Catholic High School in Niagara Falls, said he wrote the letter and believes more people would have signed if they had known.

He said he didn’t want to vilify the church but wanted her to be responsible.

The school board principal said in a statement that the board “supports staff as they follow their conscience on this issue.”

Some Catholic entities in Canada have apologized, but the Vatican has not.

Gerard Bergie, Bishop of St. Catharines, had previously expressed “deep sorrow and regret for all the pain and suffering experienced by the children who were forced to attend these schools run by Catholic bishops, priests and nuns. “.

“This is a dark period in our history and one that we can never forget,” the bishop said in a statement.

When asked for a response, the Diocese of St. Catharines responded with a link to an opinion piece Bergie wrote in the St. Catharines Standard that shared similar sentiments.

â€œAs a diverse church, we respond to these calls; however, more can be done, â€he wrote, highlighting a call from the TRC for the Pope to apologize.

â€œOver the past two years, the Canadian Conference of Catholic Bishops has worked with the Vatican in response to this call. It is hoped that in the very near future, a delegation of Indigenous people will meet Pope Francis in Rome in order to promote meaningful encounters of dialogue and healing, â€the article reads.

â€œFor many, they want to see their church leaders push harder and respond to the call to action, but also, compensation and recognition of all residential school related documents need to be released,â€ he said. he declares.

In a previous interview, the Archbishop of Winnipeg, Richard Gagnon, said the Pope could not order Catholic entities to turn over documents.

First Nations, MÃ©tis and Inuit leaders will meet with the Pope separately between December 17 and 20, culminating with a final papal audience on December 20 with the full Indigenous delegation.

The call to hold the Catholic Church responsible; Indian Residential Schools and Missions