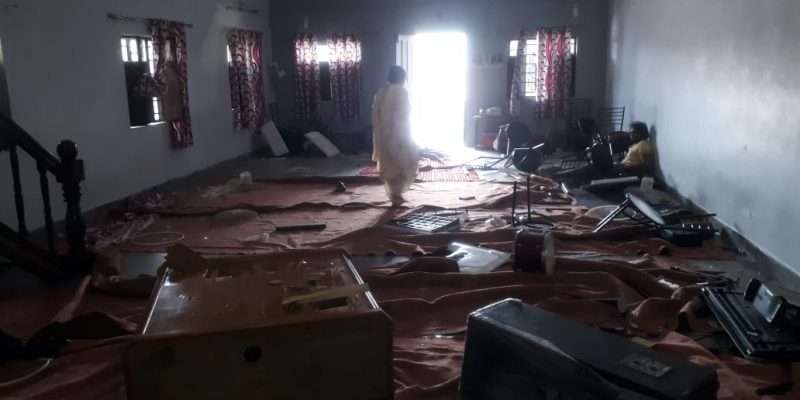 Members of the VHP and other right-wing groups vandalize the Roorkee Church, attack those who pray

Dehradun: More than 200 unidentified men and women, allegedly belonging to local right-wing groups, ransacked a church in Roorkee on Sunday, October 3, injuring several people who had gathered for morning prayers.

According to the FIR recorded by Prio Sadhana Lanse, the wife of the pastor of the church, more than 200 men and women belonging to the Vishwa Hindu Parishad (VHP), the youth wing of the Bajrang Dal and the Bharatiya Janata Party, did burst into the church and began to vandalize it, while beating the faithful.

At around 10 a.m., the crowd, armed with railroads, destroyed chairs, tables, musical instruments and photographs that were in the church.

Talk to Thread Over the phone, Lanse said the attackers went on a rampage and destroyed everything in their path.

“The frenzied crowd shouting slogans like ‘Vande mataram ‘ and ‘Bharat mata ki jai ‘, broke into the church, which is on the first floor of the building, â€Lanse said. â€œThey started beating our volunteers and the attackers beat our women. ”

The vandalism lasted more than 40 minutes and Rajat, a church volunteer, sustained serious head injuries. He was transferred to a public hospital in Dehradun where his condition is believed to be critical.

Lanse also alleged that the women present, including her daughter Pearl, were inappropriately touched by the attackers. Another church follower, Akshi Chauhan, confirmed this. â€œI saw that an elderly man had hugged Pearl forcibly and was having a hard time breaking free. When I went to save her (Pearl), an abuser asked me what I, being a Hindu, was doing in the church, â€Chauhan said. Thread.

The disbelievers then allegedly dragged Chauhan by the hair and beat her.

Sumit Kumar, an eyewitness, said Thread that the attackers damaged the CCTV cameras installed in the premises of the church before starting their attack.

â€œThe disbelieving women attacked the women in the church and the men broke everything: table, chairs, inverters and photos kept in the church,â€ Kumar said.

The FIR – including a copy Thread accessed – was filed under Articles 295, 296, 395, 323, 504, 506 and 427 of the IPC, which deal with the desecration of a place of worship, disturbing a religious assembly, dacoity, de willfully cause injuries, insults that disturb the public peace, criminal intimidation and mischief causing damage exceeding Rs 50.

Four women – Rajni Goel, Rakhi Pradhan, Banita Chauhan, Seema Goel – and two men – Dhir Singh and Shiv Prasad Tyagi – have been appointed to the FIR. We learn that these individuals are residents of Roorkee and that Lanse identified them when they ransacked the church.

No arrests have been made and police are trying to access CCTV footage from nearby places to find the culprits. Rural SP, Haridwar Parminder Dobhal, was unreachable and the Roorkee police station was quiet about the incident. A senior police officer said the culprits were named in the FIR and that police teams were tracking them down. “Adequate security personnel were deployed at the church premises and also at the complainant’s residence in Roorkee,” the officer said.

The church has been functional for over 35 years and after Pastor DR Lanse passed away from COVID-19 last year, his wife Sadhana is hosting the prayer meetings.

â€œFollowing the COVID-19 protocol, we are only allowing 12 people to attend Sunday prayers and the rest of the community members are connected by video call. The attackers first damaged the cell phone used for online prayers, â€Kumar said. The attackers outnumbered those present in the prayer hall. An attacker, Kumar said, picked up the church guitar and began to thread the string, threateningly showing it to the women in the prayer hall, then smashing it on the floor. â€œThe hooligans had a clear plan to damage CCTV cameras first, then grab all of our cell phones before lashing out in the church. The attack on the church was well planned, â€Kumar said.