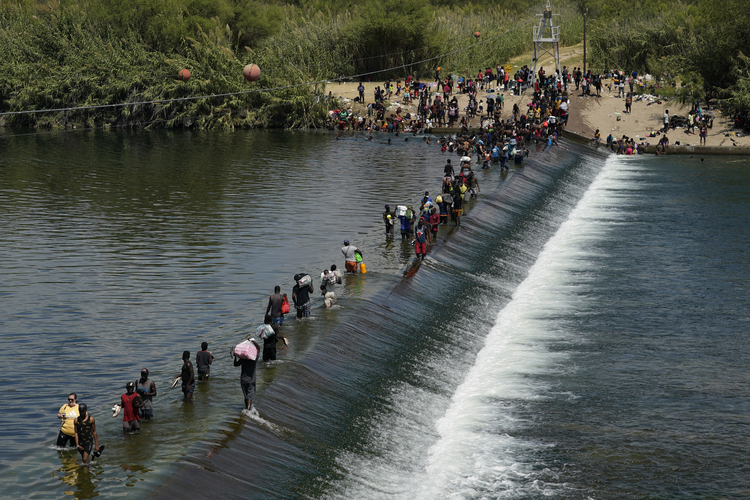 Recently, I went to the border community of Del Rio, Texas with Guerline Jozef, founder of the Haitian Bridge Alliance, and witnessed the appalling human rights violations perpetrated by the United States government against destitute and resourceful migrants.

I saw tents made of bamboo poles and cardboard, sheathed in old skirts and T-shirts. I have seen fathers holding infants, mothers cradling toddlers, and women and men who risked it all because of their belief in the promise and compassion of our great country. But these families were not greeted by the love and humanism that are America’s best, but by a phalanx of gargantuan guards, guns and SUVs – some sporting insignia of supremacy. White.

As a human rights activist and lawyer, I have worked in solidarity with Haitians and the Haitian community at large since 1977. Over those decades, I have witnessed the unimaginable and devastating toll that American foreign policy has imposed to the Haitian people.

What I witnessed in Del Rio is an extension of more than decades of racist US politics. Vulnerable migrant families, mainly Haitian asylum seekers, remain trapped in situations without access to the humanitarian and legal aid they critically need.

What I witnessed in Del Rio is an extension of more than decades of racist US politics.

In acts of courage and sheer desperation, Haitians made the dangerous journey to our border with Mexico, fleeing a devastating combination of natural disasters and political instability. They seek the protection to which they are entitled as asylum seekers under US and international law, and yet they have been subjected to unspeakable violence and discrimination every step of the way. More shamefully, they suffered horrific acts of racism from US border officials, including assaults by border patrol officers on horseback. One couldn’t help but think of the dogs and pipes unleashed against civil rights protesters in the South in the 1960s.

The U.S. government is seeking to clear the Del Rio camp in the coming days, swiftly evicting as many people and families as possible, including those who have witnessed or suffered the law enforcement abuses that are currently taking place. ‘under investigation.

The Biden administration must act now to end these atrocities at our border and live up to the values â€‹â€‹they profess, starting by immediately stopping all deportations to Haiti, which is still reeling from a presidential assassination , a magnitude 7.2 earthquake and another in a series of powerful tropical storms. (Currently, the US State Department is warning against visiting the country, stating, “Do not travel to Haiti due to kidnappings, crimes, civil unrest and COVID-19,” placing it in the same category than Afghanistan, North Korea and Yemen.) Mass deportations of Haitians and other black asylum seekers and refugees violate the ban on non-refoulement – a principle of international and US refugee law which prohibits any form of return when an individual’s safety or liberty remains in imminent danger.

The Biden administration must act now to end these atrocities on our border and live up to the values â€‹â€‹they profess, starting by immediately stopping all deportations to Haiti.

The Biden administration must ensure that all those currently trapped in the Del Rio camp have full access to humanitarian assistance, including shelter, clothing, food and water, and services culturally competent legal systems, including information on â€œknow your rightsâ€.

The administration must also immediately rescind the Trump administration’s draconian Title 42, a policy advocated by Presidential Assistant Stephen Miller that has clearly been used to illegally turn back people seeking asylum under the guise of a warrant of ” public health “. In fact, there was no Covid health emergency in Del Rio, and using Title 42 to deport asylum seekers there is illegal.

We must welcome all asylum seekers in a fair process that respects the human and civil rights of those seeking protection.

In order to realign ourselves with fundamental principles of international humanitarian and US law, we must welcome all asylum seekers through a fair process that respects the human and civil rights of those seeking protection. In the meantime, the administration must use a humanitarian parole system to allow those at risk at the border to enter the United States while they pursue their legal claims for protection.

What would happen to our country if we truly treated people with dignity and respect? Think about the tenacity of one person who survived the 2010 earthquake in Haiti and the trauma it caused and managed to make their way, perhaps with children and maybe a husband, to a Latin American country: Peru, Brazil or Panama. She managed to find a job and survive. Then, hearing that she might be reunited with family members already established in the United States, she figured out how to get to the Del Rio Bridge. Would our country benefit from having this person – with his determination, his common sense, his survival skills and his resilience – in our communities, by supporting our schools and by making our country stronger, fairer and more generous?

As the second Catholic president of our country, Joseph R. Biden Jr. introduced a faith-based equity agenda to the White House. He frequently brings up memories of his Catholic upbringing at Holy Rosary Elementary in Claymont, Del., Writing in a column for Religion News Service in 2019 that â€œthe nuns there taught us to read, write, math and l history, as well as the basic concepts of decency. , fair play and virtue. They were inspired by the teaching of the gospel of Matthew: â€œEverything you did for one of my younger brothers and sisters, you did for me.

The church celebrated its 107th edition of World Migrant and Refugee Day on September 29, and it is time for the president, and for all of us, to learn from his lessons and listen to the words of Pope Francis , to “speak together, without prejudice and without fear, as close as possible to the most vulnerable: migrants, refugees, displaced persons, victims of human trafficking and the abandoned.

It is then, and only then, that our nation will truly be able to build back better.

[Related, from 2019: Kerry Kennedy on the chaos and cruelty at the U.S.-Mexico border]