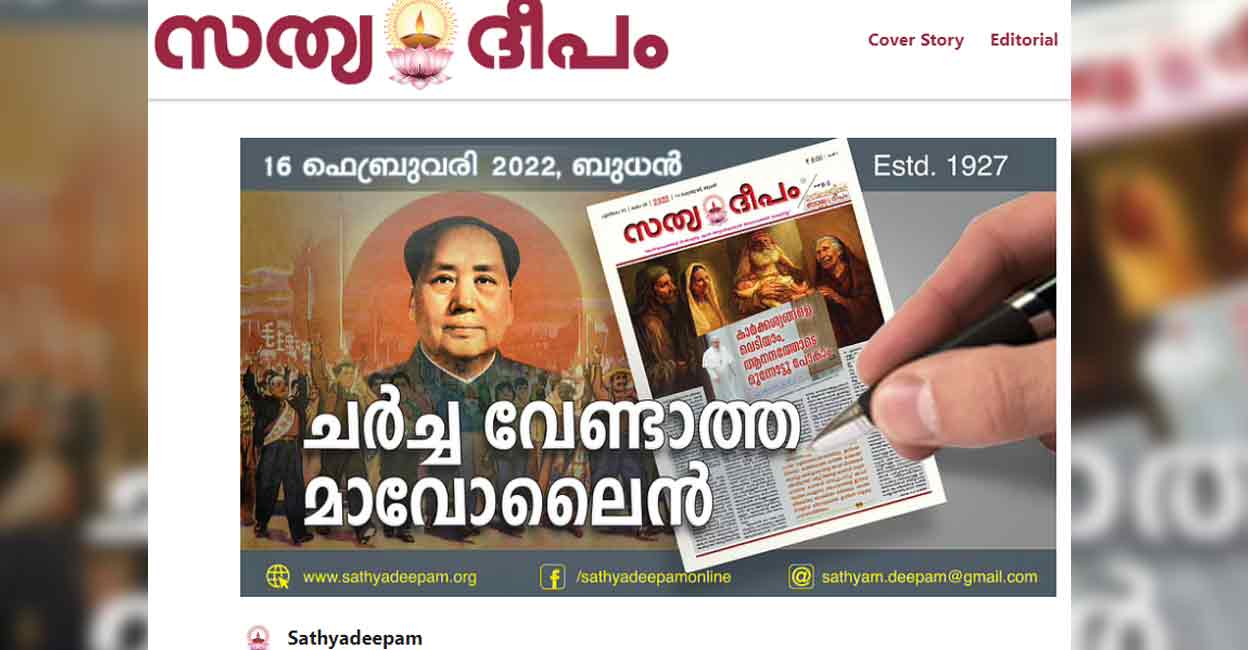 Kottayam: The Archdiocese of Ernakulam-Angamaly has blasted the Pinarayi Vijayan-led LDF government in Kerala for its alleged high-handed policies towards the proposed SilverLine project and the Lokayukta Ordinance.

The criticisms were voiced in a hard-hitting op-ed dated February 10 under the headline “Mao-line without dialogue” in Sathyadeepam, the official publication of the archdiocese which is owned by the Syro-Malabar Catholic Church.

The play opens with a reference to the evolution of China; three decades under Chairman Mao (Zedong) in which China emerged as a political force, followed by the reign of Deng Xiaoping and the emergence of Xi Jinping in 2013 (sic) resulting in the political philosophy of xism.

“China has changed from a one-party nation to a one-man nation,” the editorial notes, with the inference that Jinping is positioning himself as the nation’s indefinite leader.

“Learning from this illusory China is what the top thinkers of the Communist Party of Kerala said in its recent lectures. The party secretary reiterated the same,” says Sathyadeepan.

Having established earlier how the Communist Party in China believed it was necessary to blindly trust its leader (Mao) even when his ideas were initially incomprehensible, the article draws a comparison with recent developments in Kerala, which is ruled by the left front.

“Let what is said be understood is irrelevant. Those who propagate a dangerous philosophy that if it is the party that says there is no need to understand, are now introducing K-Rail as the last train of development.”

Sathyadeepam is also interested in the recent cyberattack on poet Rafeeq Ahammed, a left-wing sympathizer, who ridiculed the project with his “where to go, so fast” verses.

The Supreme Court expressing concerns about public support for the project and the opposition questioning the lack of debate regarding the likely socio-environmental-economic impact of SilverLine is also mentioned in the editorial.

“When the majority say they can’t understand why the Chief Minister and the party keep saying that K-Rail is the solution to Kerala’s development problems even though it has pushed tens of thousands of people into the streets, the government is on a Mao line that it will go ahead whether the project has been understood or not.

“The problem is not just K-Rail. The government’s response to a question about why the rush, without dialogues and silencing opposing voices, was to lay survey stones even in the kitchen of the The Center is of the view that approval in principle is not a wink to land acquisition.”

Sathyadeepam then confronts the LDF government over the recent issue of the Lokayukta ordinance saying it is also related to ‘unnecessary haste’.

“It is a basic fascist tactic to use ignorance as a way to establish rule. It was Mussolini who said that not everyone should be told that political equality was not necessary and that the greatest farce in the world was political equality.

“Those who shut down dialogues and fear conversations are on a fascist path.”

The article further warns that “it was undemocratic to think that anything can be accomplished with a few cyberbullies in the ranks.” “The problem is that programs and projects are designed from the top down. Even though the party has forgotten its grassroots planning heritage, the public still remembers it.

“… It is important to guide Kerala into the future. Projects that ensure development are also needed. But a mindset to see the light through dialogues is essential. submission is sensitivity. It’s also a friendly approach the present demands, remember,” the editorial notes.