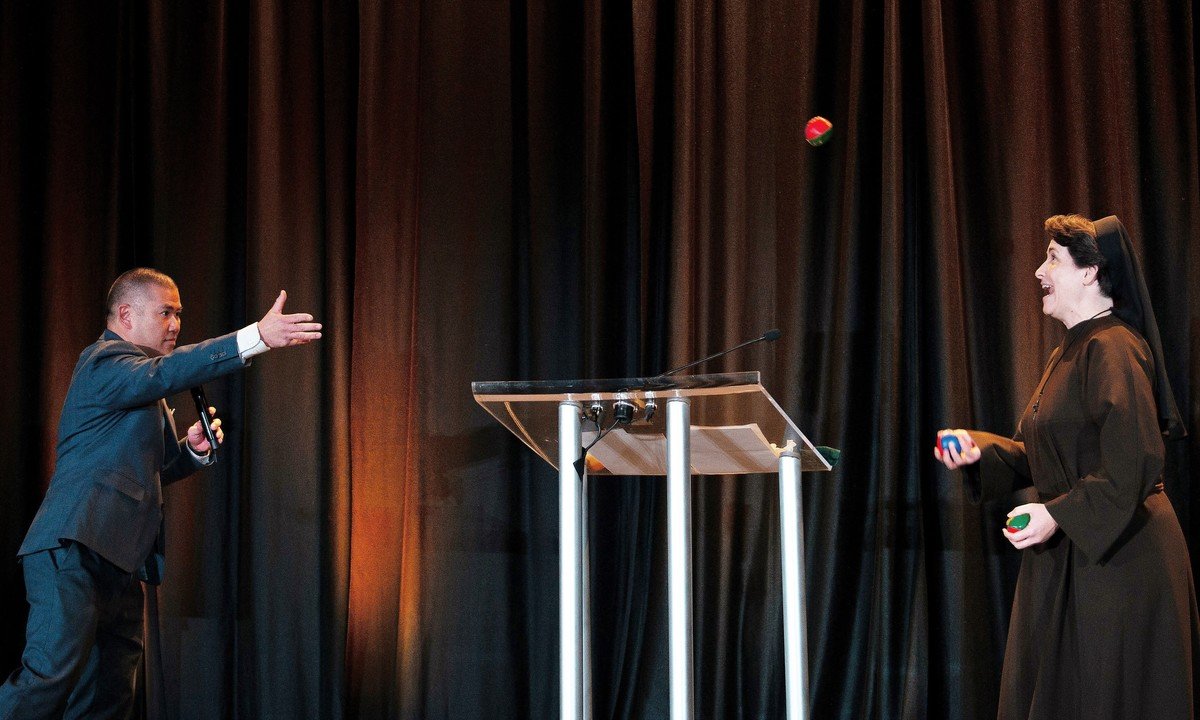 As co-masters of ceremonies for the Archbishop’s annual dinner on November 10, Clayton Imoo and Sister John Mary Sullivan were called upon to juggle many tasks throughout the evening, including, it turned out, performing a real juggling act.

The couple hosted the juggling show as a way to bring the night’s most serious goal to life – raising funds for the Archdiocese’s marriage and family ministry. Whenever Imoo listed a challenge facing Catholic families, he threw a juggling ball at Sr. John Mary, who then added the final take to the ones she already expertly held in the air.

“We all know how important and beautiful family life is,” observed Sister Sullivan, to which Imoo replied, “busy, too programmed and crazy.” Just like juggling.

It was one of many entertaining moments at the tenth annual dinner, which saw 739 people from across the Archdiocese and beyond fill the Regency Ballroom at the Hyatt Regency Hotel in downtown Vancouver. As with all such events now, strict pandemic precautions were in place, including the requirement to show proof of vaccination.

The highlight of the evening was, as usual, Archbishop J. Michael Miller’s keynote address on â€œThe State of the Archdiocese,â€ which focused on several key issues including: challenges related to the pandemic, not least of which is the fact that attendance at Mass has fallen by a third compared to the time before the pandemic; continued efforts towards truth and reconciliation with First Nations; opportunities related to the preparation of the Synod of Bishops to be held in Rome in October 2023; and, of course, the need to strengthen marriage and families.

The evening was also a celebration of the community, marking the first time the Archdiocese has hosted an event of this magnitude since the pandemic fell in March 2020. â€œIt’s so good to be here together to celebrate in nobody, â€exclaimed Bishop Miller, adding that the last 20 monthsâ€œ have been a time of trials and trials, but also of grace and blessing â€.

Among those who celebrated with the Archbishop were Don and Ausma Vicic, longtime event sponsors, from St. Anthony Parish in West Vancouver. Don, 85, who was a member of the British Columbia Lions football team, Gray Cup champions in 1964, said his continued support for the event was directly linked to his faith.

Another notable participant was Manny Jules, former Chief of the Kamloops Indian Band and current Chief Commissioner of the First Nations Tax Commission. Earlier today, Bishop Miller met with Chief Jules in person and via Zoom with Phil Fontaine, a former National Chief of the Assembly of First Nations, to discuss reconciliation initiatives.

Dressed in a pearl poppy donated by Chief Jules to mark Remembrance Day, Bishop Miller devoted much of his speech to highlighting his commitment to righting the wrongs done to First Nations peoples.

â€œThe residential school system was deeply flawed and we Catholics deeply regret the attitudes, neglect and abuse that have caused so much damage. For this, we are – all – very sorry, â€said the Archbishop. â€œHowever, if these words of apology are to restore life and bring healing, they must be accompanied by tangible actions that promote the full disclosure of the truth. Truth comes before reconciliation.

Archbishop Miller has promised that the Archdiocese will be fully transparent with its archives and records related to all residential schools. He also said the Archdiocese and First Nations leaders are working on agreements that will strengthen the Church’s relationship with local Indigenous communities.

To achieve this goal, funds raised from the Archdiocese’s recent Special Collection for Healing and Reconciliation will support an Indigenous-led committee to review proposed projects related to these projects: healing among survivors and their families; strengthen the language and culture of the First Nations; commemorate the deceased; and foster reconciliation between Indigenous and non-Indigenous peoples. Disbursement of funds could begin as early as next month.

The objective of the evening was to raise funds for another cause dear to Bishop Miller’s heart, strengthening marriage and families. Brett Powell, the archbishop’s delegate for development and ministries, told spectators that the funds will support the Archdiocesan ministries focused on issues such as marriage preparation, parenthood and strengthening Catholic families.

â€œChristian families, well lived, become spiritual outposts in the evangelizing mission of the Church,â€ said Powell. “For a world that has forgotten to blush, Christian families model modesty and preserve the sanctity of sexuality, keeping it hidden in the sacrament of marriage.”

More than anything else, he said, â€œChristian families remind us of our evangelical nature,â€ said Powell.

â€œRather than going into seclusion, Christian families look at the world around them with their heads held high and their chests forward. They fear little, they observe everything and they are open to the good things of the culture due to their disciplined moral, intellectual and spiritual life lived within the four walls of their house.

Sponsorships, ticket sales and other donations totaled over $ 275,000 for marriage and family ministries at the time of publication. Donations are still being received and the dinner will be broadcast on November 24 at 8 p.m. for those who were unable to attend and contribute. See details at rcav.org/dinner2021.

The continued success of the Archbishop’s dinner left another of his special guests, John Nixon, with a particularly big smile on his face. Nixon was the newly appointed Archdiocesan Development Director when, challenged by Archbishop Miller to find a way to support the Archdiocesan projects, he opted for the idea of â€‹â€‹an annual dinner of the archbishop.

â€œThere have been very successful Archbishop’s Dinners in Toronto and Ottawa,â€ said Nixon.

Thinking back to over 10 years of dinners, he said, â€œIt makes me feel good because it has really worked, and the funds that have been raised will support programs and projects for decades to come. Anyone who has attended one of the dinners should be proud of what we have all been able to accomplish.

In addition to addressing major issues such as reconciliation with First Nations and preparations for the 2023 Synod in Rome, Archbishop J. Michael Miller used his speech at the Archbishop’s Dinner to highlight 15 successes achieved by the Archdiocese over the past year. They understand:

â€œThese projects show, I believe, that despite the challenges we face, the Catholic Church in Vancouver is thriving internally and making a significant contribution to the well-being of the community at large,â€ Archbishop said. Miller.

Welcome to the labyrinth | Baxter Bulletin