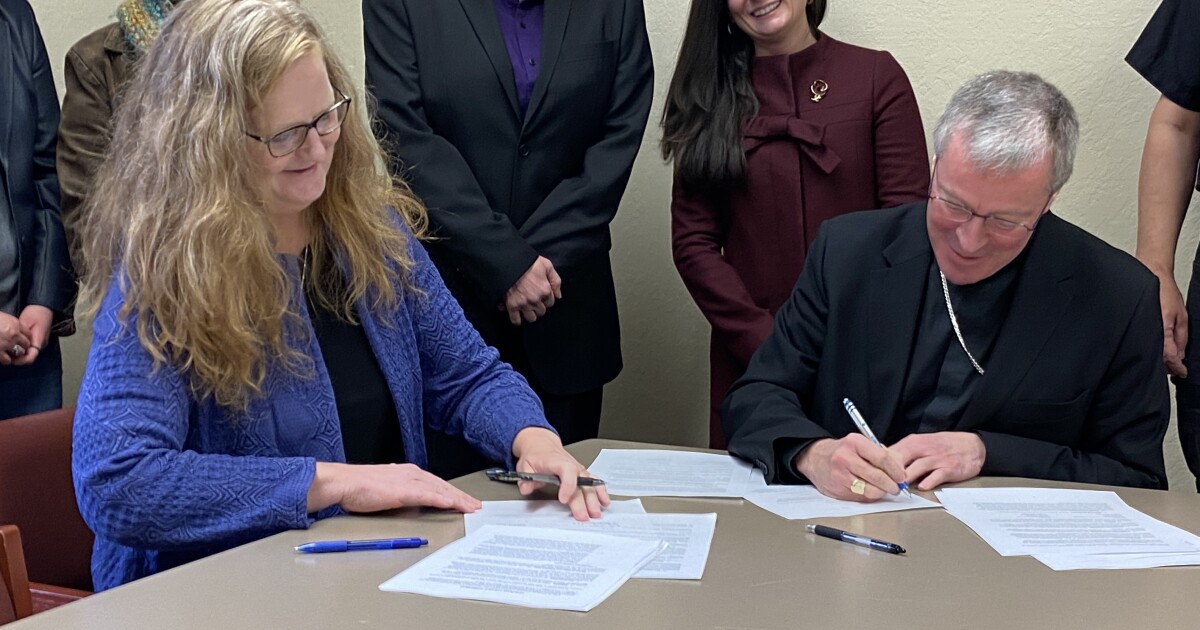 Jewish community and Diocese of Helena plan for a historic synagogue

HELENA – For the past 40 years, a stone building on Ewing Street has housed the offices of the Roman Catholic Diocese of Helena. But when it opened in 1891, it was Temple Emanu-El, Montana’s first Jewish synagogue. From now on, a new agreement could once again lead to the transfer of the building to the Jewish community.

â€œSeveral times I walked past this building and sat in front of my car and imagined what it would be like if it was returned for Jewish use,â€ said Rebecca Stanfel.

This possibility is more than just imagination now for Stanfel. She and other members of the community prepared the Montana Jewish Project, a new non-profit organization, hoping to facilitate the purchase of the building.

On Thursday, Stanfel sat down with Bishop Austin Vetter, the head of the diocese, to ceremoniously sign an agreement. He urges the diocese to sell the building to the Montana Jewish Project once it has secured the necessary funds.

Discussions began in April, when the diocese planned to move its offices – along with several partner Catholic organizations – to the new Seeley Building, downtown on Last Chance Gulch. This meant that they had to start planning for the future of their current building.

Members of the community began to facilitate conversations between the diocese and people like Stanfel who wanted to take the building back to its historical roots.

â€œIt immediately excited us all, because of the importance of Jewish and Catholic dialogue together,â€ Vetter said. â€œWe thought, wouldn’t it be great if the Jewish community could get their synagogue back? And so, that’s really how it started, with little conversations, and the support started to grow one by one, until the reality of today.

Interfaith cooperation was symbolized from the start of Thursday’s meeting, when Vetter opened with a Catholic blessing calling for friendship and unity, and members of the Jewish Project followed it with a prayer called the “Shehechiyanu”, which is used to mark something that is happening for the first time.

Former Emanu-El Temple was added to the National Register of Historic Places in 2002. A report by historian Ellen Baumler, included in this list, presents the history of the building.

Helena had a thriving Jewish community dating back to the pioneer era. It included many of the city’s most successful early business leaders. According to Baumler, a Jewish congregation formed, but remained without a place of worship for years. After recruiting a rabbi, they began to work on building a temple.

In 1890, Montana Governor Joseph Toole laid the cornerstone of the Emanu-El Temple. The congregation said their purpose for the building was to “adorn the city”. The synagogue was consecrated the following year and continued to serve the Jewish community for the next four decades.

Baumler said the congregation had started to decline due to economic hardship. In the 1930s, they were no longer able to maintain the building. In 1937, they sold the temple to the state of Montana on the condition that it be used for “social purposes.”

The state removed some of the building’s characteristic religious elements, including two copper domes and a Hebrew inscription reading â€œGate of the Lordâ€. They eventually used it for public welfare offices.

In 1981, the state was no longer actively using the building and the diocese bought it. Stanfel said the diocese had done a great job preserving it over the years.

There are still some visible signs of the building’s history, including stained glass windows and the cornerstone, which is dated 5651 – the year it was built, according to the Jewish calendar.

â€œI like to think of this building as a living symbol of Jewish life, of the vital and flourishing Jewish life here in Helena and throughout Montana,â€ Stanfel said.

Stanfel said the Montana Jewish Project has no plans to immediately convert the building to a synagogue. Their goal is to make it a cultural and community center that will serve as an anchor for the Jewish community and share information about Jewish culture in Montana.

â€œIn the short term, what we want to do is provide space for those in the Jewish community of Helena who wish to use the space for church services, cultural gatherings, Hanukkah celebrations, reading groups. Jews, Jewish cooking groups, â€she said.

She also hopes to share the space with non-Jewish groups who share their goal of â€œtikkun olam,â€ a Hebrew phrase meaning â€œto fix the worldâ€ and often referring to social and community action.

Mimi Wolok, also leader of the Montana Jewish Project, has been closely associated with negotiations with the diocese. She told MTN that the association is now making a small down payment and will have several months to confirm that it can secure the necessary funding to complete the purchase. She said the diocese has been very flexible in working with their group, including offering them the building at a lower price than estimated.

While signing this deal is only a first step, everyone involved in the deal is excited about the cooperation that has brought them so far.

â€œThis deal seems historic to me, it seems important beyond here to Helena,â€ Stanfel said. “His [Bishop Vetterâ€™s] the willingness to work with a fledgling nonprofit organization with patience and dignity is simply amazing.

“In a society that so often shows the divisions and fractions that are part of our society, what a wonderful thing to be able to finally set an example, no everything doesn’t have to be a division, we can do good things together if we sit down and get creative, â€Vetter said.

In addition to the diocese and its foundation, Montana Catholic Social Services and the Montana Catholic Conference are also moving to the Seeley Building – forming what Vetter calls a “Center for Catholic Life.” The leaders hope to take the step in the coming months.

Faith, prayer and work lead the parishioners of Saint Benedict on their last journey to the new church