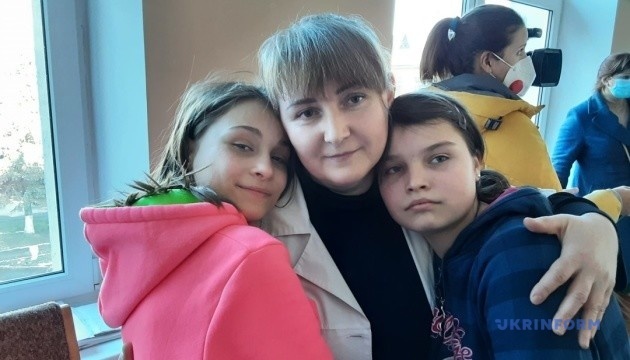 In Chernihiv, 30 children with an educator hid in a basement from Russian shelling for more than two weeks

Children from the Chernihiv Social and Psychological Rehabilitation Center were received at Ivano-Frankivsk station on March 19. They were brought by educator Natalia Pesotska. Currently, she and 30 students from the center are in one of Prykarpattia’s sanatoriums. Only here everyone was able to calm down after almost 20 days of Russian bombardments and missiles.

Natalia Pesotska did not welcome journalists alone: ​​her little wards simply do not let her go. The children are constantly huddled next to the woman and kept close to her. Their joint story began on February 24, when Natalia Pesotska was going to take her shift at the Chernihiv Center for Social and Psychological Rehabilitation, where she has been working for more than 20 years. Then an acquaintance from kyiv phoned and said that the war had started. Natalia noted that her mind was aware of all the danger, but her heart refused to accept it.

“I quickly understood what I could do, dress my two children. We boarded a minibus. There were traffic jams in the streets. Columns of military vehicles moved along the road. Our guys took military helmets out of the windows and shouted “War! Goosebumps ran over our skin. We couldn’t even reach two stops. I grabbed the children by the arms and we ran towards my sister. I left them there and ran away to work,” Natalia Pesotska said.

At the end of his shift, the transport was no longer working. She had to spend the night at her sister’s house.

On the morning of March 1, she returned to work. At that time, she had no idea that she would spend the next 20 days on her feet, saving not only her children but also 30 inmates from the rehabilitation center.

The youngest of them is three and a half years old. According to Natalia, these children have experienced a lot of grief in their short lives, so now they are more sober and united. Some of them don’t know their parents, some of them started their lives in terrible conditions.

“As soon as we heard the sirens, we went down to the basement, where we store carrots and beets… But we also have small children, and it was very difficult to wake them up, dress them and take them down several times to the basement. times during the night. For three days we ran so fast that we had no strength left. Therefore, we simply transported the mattresses of the beds and sheets to the basement. The older children were in one room and the younger ones in another,” the educator said.

The worst started when Russian bombs hit the rehabilitation center.

“We were sitting in the basement when we got hit by a rocket or something… It’s impossible to convey the horror when the ceiling plaster starts falling… Then in the basement, I was hoping the pipes, wrapped in glass wool, wouldn’t fall on us. Because then how could we get the children out? I was shouting prayers to the Mother of God, Our Father, and the children were repeating after me. A knock hit a wall where we weren’t seated the children were seated, remained untouched…Half the center is now destroyed, windows and doors have been smashed, a dining room has been destroyed…And there we were just 20 minutes before the attack,” Pesotska said.

WE HIDE IN THE CHURCH FOR 11 DAYS

Then Natalia quickly began to think of options where she could hide the children without exposing them to danger. The nearest shelter was the Trinity Church, where about 600 people from nearby villages were already hiding.

“We hid in the church for 11 days. We moved there with children between the bombings. We were given a room of 16 square meters. The children slept in pairs in five bunk beds. The old ones slept on the floor , which was covered with mattresses. The telephone connection was cut off,” recalls Pesotska.

After the local power station and water supply system were destroyed in airstrikes, people were left without heat, light and water. It was not easy to go through this ordeal in church with children suffering from bedwetting. It was impossible to wash the children or take them to the toilet in time. Wet wipes ran out quickly. Caring people and volunteers donated food to the children. Soups were brought twice a day. When possible, they also brought apples and cookies to their shelter.

“At the gates of the church, the occupiers set up a tank and fired at it over our heads. Shells and fragments flew. A man came out of the shelter of the church in the morning, and his leg was cut by a fragment. We understood that it was dangerous to go out, “said the educator of the center.

The days seemed endless. Nine-year-old Vitalik has finished reading two books. Others listened to fairy tales, stories of saints, painted and prayed. In the church, everyone gathered together. They confessed and took communion.

THERE WAS NOTHING BEHIND

They were rescued by two soldiers. It took 15 minutes to get the kids ready. They were taken away by school buses. The enemies have failed to provide a promised humanitarian corridor…

“Among the educators, I was the only one. My children and my husband were with me too, so I was not afraid. I knew that there was nothing left where we left then,” Natalia said.

It took 9 hours to reach Kyiv from Chernihiv, as buses carrying children skirted fields and ruined areas. The drivers did not stop because they were afraid of being shot.

The volunteers met the children and the educator at the kyiv train station. They were asked if they agreed to take a train to the Ivano-Frankivsk region, which was due to leave in 15 minutes. Everyone shouted unanimously, “Let’s go!”

“The hardest thing for me was not even in the basement, but when we got on the train, because I was afraid of losing children. We forgot some things at the station: everything was very fast , the children just started to eat something. We took them by the hand, counted them constantly, checked if everyone was seated… On the way, we received a call from Prykarpattia, they were waiting for us .

How are we here? Very well. We feel at home. A low salute to the director of the sanatorium, employees, ”said the educator.

She noted that it was only now that she noticed she couldn’t hear out of one ear: whether she had a cold or had lost her hearing after the explosions. Here, for the first time, she was able to change clothes, because she arrived in her uniform, which she had been wearing since March 1.

Children still need to be calmed down at night, because not everyone can sleep peacefully. Now, says Pesotska, they are all one big family.

There’s nowhere to go back to this family. The multi-storey building in Chernihiv, where Natalia lived with her husband and children, was destroyed. The shelling also destroyed the Chernihiv rehabilitation centre, which housed 30 children deprived of parental care…

PS Since the beginning of the war, Prykarpattia received 294 children from boarding schools in Luhansk, Donetsk, Kharkiv, Chernihiv and kyiv regions.