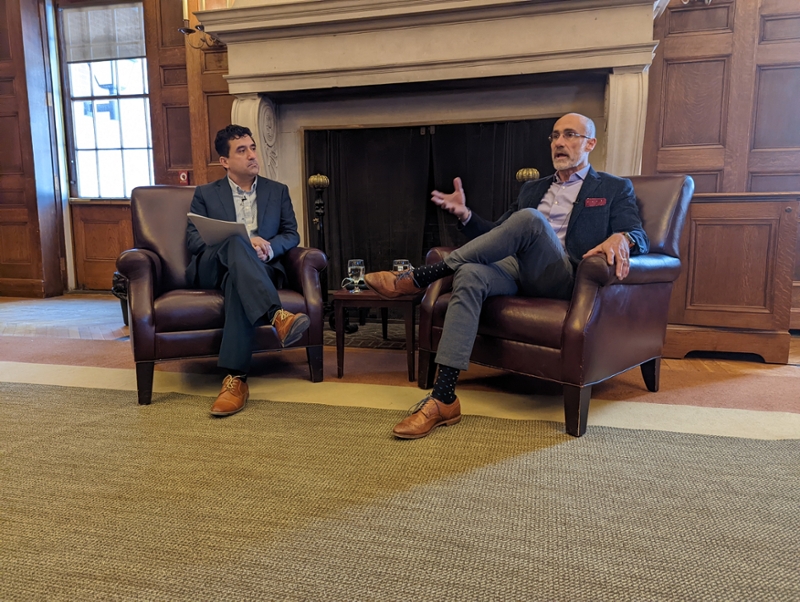 Considered a leading intellectual voice on the center-right, Brooks served for ten years as president of the Washington, D.C.-based American Enterprise Institute, a leading conservative think tank. He is now the William Henry Bloomberg Professor of Public Leadership Practice at Harvard Kennedy School and Professor of Management Practice at Harvard Business School. He is the author of eleven books, including Love Your Enemies: How Decent People Can Save America from the Culture of Scorn (2019), which debuted as a national bestseller.

The quote above was in response to a question from an audience member about what Brooks remains unsure of today. “I constantly try to question my political beliefs and challenge them,” he said, “but I can’t do that unless I’m surrounded by people who don’t agree with them. me.” The problem we have today, Brooks continued, is that disagreeing with people has become so difficult. “It became like a mano a mano fight, like a wrestling match.” When you’re not sure about something (“and you shouldn’t be sure”, he said), the ideal situation is to discuss the issue, but reasoned argument has become more difficult in today’s politically polarized environment — and it shouldn’t be: “You’re not denying my identity just because you don’t share my political beliefs,” Brooks said.

Friday’s event, hosted by Assistant Dean of Student Affairs for Inclusion and Diversity Eduardo Pazos, who is also director of the Rachel Lord Center for Religious and Spiritual Life, was titled “Faith, Leadership, and Political Change —Exploring the Role that Faith Communities have to create meaningful change in America.

Asked about the contribution of religious communities and how some members of these communities have taken part in polarizing behavior (by supporting the Capitol riots of January 6, 2021 for example), Brooks, a devout Roman Catholic, replied that everything the world is imperfect, including those of faith. “My faith is the most important thing in my life, but I won’t fool myself into thinking that the Roman Catholic Church, which I love, isn’t run by imperfect people with ‘feet of clay. ‘.” The Catholic Church, he said, has struggled a lot because of human frailty, referring to the church’s many sex abuse scandals involving priests. People who share your faith may do things and say things you disagree with, Brooks continued, but that should never shake your faith.

Brooks also spoke about the importance of hope and described how her faith gives her the strength to reject hate and face the future with hope and courage. “Hate is a by-product and an expression of fear,” he stressed. We have a choice in the face of opposing points of view, he added. We can choose hate or courage. “Courage leads to love, while hate leads to entrenched conflict and lack of progress. You can only persuade people with courage and love.

Much of the unpleasantness in today’s culture and politics, Brooks said, is because young people have been turned into “child soldiers in our culture war” by older generations, “being told that they should hate someone for being on the other side of the political divide. Nonetheless, Brooks said he has “tremendous hope” that young people will someday reject this polarization.

“Courage leads to love, while hate leads to entrenched conflict and lack of progress. You can only persuade people with courage and love.

In her March 2 Wednesday evening speech, “Life and Love After COVID-19,” Brooks said the pandemic — and the fear, loneliness and grief many have felt during it — offers people a chance, perhaps counterintuitively, to become happier.

While many have heard of post-traumatic stress disorder, Brooks said psychologists also speak of “post-traumatic growth.” “Even small traumas can lead to huge growth,” he said.

The pandemic and its confinements have revealed how crucial social contact is. And social media is no substitute, Brooks warned. “We need to be more intensely in contact with each other,” he said. Specifically, he prescribed more eye and touch contact — a “twenty-two-second hug every two hours” with someone you love. (And making eye contact with a dog counts!)

Yet people tend to turn away from what they need during times of stress. Our “lizard brain”, or amygdala, kicks in and we are likely to fall back into avoidance, isolation and rumination. As an antidote, Brooks – a practicing Roman Catholic who studies Buddhism – said we can help ourselves by adopting the Buddhist practice of metacognition, or mindfulness, which is observing ourselves from a distance.

“Thinking about the feelings you’re having moves them from the limbic system to the frontal cortex of your brain, where they don’t deal with you, you deal with them,” he said.

In conclusion, he reiterated that the times of change and uncertainty – which rush into all of our lives, whether we like it or not – present great opportunities. “The only choice we have is how to react: learn, grow or not,” he said. “As a nation, we have the opportunity to love and understand each other more.”

Outside of these community-focused engagements, Brooks has also made time to meet with Bowdoin civil service students, attend classes, and help launch a new Bowdoin Intergroup Policy Dialogue program.