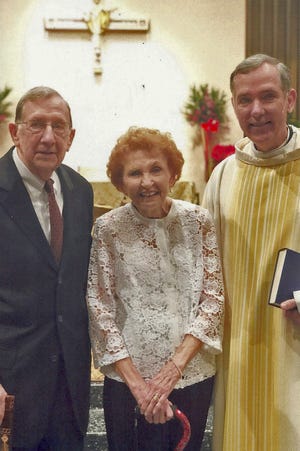 Faith and family were top priorities for Fran Startzman

Editor’s Note: Every Sunday, The Herald-Mail airs “A Life Remembered”. Each story in this continuing series takes a look back – through the eyes of family, friends, colleagues, and more – on a recently deceased community member. Today’s “A Life Remembered” is about Frances Katherine Startzman, who died on July 8 at the age of 84. His obituary appeared in The Herald-Mail on July 12.

Over the years, Fran Startzman’s many talents have kept her busy working as a model, florist, volunteer and businesswoman.

But it doesn’t take long for her family to remember her for her passions closer to home.

“She was either in church or in the kitchen,” her daughter Sally Miller said.

Thousands of Christmas cookies in dozens of varieties have made their way from her kitchen to her friends, family and acquaintances.

And her floral talents graced the altar at St. Ann’s Roman Catholic Church in Hagerstown, where, among other things, she organized the mourning committee and maintained a long list of people she prayed for.

“A friend of mine called her St. Frances,” her daughter Mary Wade said.

They asked her to pray for important things, and she organized everything by putting each person and their prayer request on individual cards.

“And they all felt things were going well now that my mother was going to pray for them,” said Mary.

“She updates her list, but it takes a long time to get rid of it,” Sally said. “His list goes on and on.”

Fran had her prayer cards with her when she was hospitalized with pneumonia just before her death, and she told the chaplain and staff that she would pray for them.

A fervent Catholic until the end, the last food she ate was the Holy Eucharist, the cake that Catholics believe to be the body of Christ.

A talent for cars:Kenny Parlett crossed the finish line in life as an “incredible man”

Born in Cumberland, Maryland, her family moved to Hagerstown in 1943, where she graduated from St. Mary’s High School in 1954.

She started her career as a florist during her high school years and worked at Abbie Jane Flowers and Ben’s Flower Shop in Hagerstown.

After attending the Victoria Mannequin School of Modeling in Pittsburgh, she worked in Steel City and New York, modeling items from clothing manufacturers for store buyers.

Husband Bob said that’s how she got her infectious smile.

“When she went to modeling school, the instructor said, ‘If you walk down the street and someone comes up to you, if you smile at them, there will be 1,000 smiles today.’ , did he declare.

She joined her high school friend Carol Moller in New York City to use her talents as a florist, working at the Roosevelt and Waldorf Astoria hotels before returning to Hagerstown three years later and marrying Bob.

The couple met at St. Mary’s Catholic Church in Hagerstown when the usher escorted them to the first bench where Bob, who had just been discharged from the United States Navy, was sitting with his brother.

“So my brother said, ‘I pushed two people across the bench so she could sit there,” “Bob said with a laugh.

He remembers that she was wearing a white hat, gloves and high heels and a black dress.

After church, Bob, who had known Fran from high school, asked if he could call her someday for a date, and she agreed.

He later pulled out the phone book to search for Fran Aaron – his maiden name – and called.

When Fran Aaron responded, he asked if she would like to go to the movies tomorrow night.

She said, ‘I would love to, but I don’t think my husband would think about it much,’ he said with a laugh. -sister.'”

The couple eventually hooked up and had their first date on July 15, 1958. They got engaged a month later and married on December 27 of the same year.

A woman of caliber

They opened Startzman’s Hardware on South Potomac Street in Hagerstown the following June and operated it until 2018.

Fran enjoyed working in the store and welcoming customers who also enjoyed his company.

But she didn’t know anything about the ammunition they were selling.

So when a customer asked for .22 shorts, she didn’t know he was talking about a type of .22 caliber bullet.

She said, ‘I looked at this man and thought, why is he coming here for shorts? We don’t wear underwear, ”Bob said with a laugh. “My dad was there and he said, ‘Honey, he’s talking about ammunition.'”

She’s been spending more time at the store in recent years after Bob suffered a stroke.

One day he told her not to bother getting in, saying he would be fine on his own.

“Thank goodness she didn’t, because I was held up,” he said.

The thief acted like he had a gun and demanded money, but no one was hurt. A customer followed him and he was arrested.

Fran and Bob teamed up with old friend Carol Moller in 1978 to open Carol and Co., an upscale gift shop in Hagerstown, which Moller sold in 1999.

She and Moller also organized volunteer staff at the Washington County Hospital Gift Shop, which benefited the Hospital Auxiliary’s projects.

Perhaps rightly so, the two longtime friends died within months of each other.

Fran has also been a model for The Windmill Shop, a women’s clothing store on Virginia Avenue in Hagerstown that hosted fashion show lunches at the Antrim House restaurant in Greencastle, Pa.

Fran and Bob loved to travel and took cruises and trips to places like London and Greece.

Their scheduled departure for Ireland on September 11, 2001 was canceled.

Fran was never too busy to be a devoted wife, mother and grandmother, and she loved having large family gatherings, especially for Christmas and Easter.

“My kids have never had babysitters,” Sally said.

“She was the center of the family,” said Mary.

Mary and Sally said she cheered them on and their brother Charlie at their sporting events when they were kids.

Everywhere she went, she would meet someone she knew or strike up a conversation with someone new.

Fran had a sunny temper and, for the past few years, sang “Oh What A Beautiful Morning” every day, improvising the last lines with thoughts on her family. She was an avid reader and belonged to the Hagerstown Garden Club and the Hagerstown Women’s Club.

Sally and Mary both attributed the faith and laughter to their parents’ long and happy marriage. They never heard them raise their voices to each other or to their children.

Bob said they never had an argument.