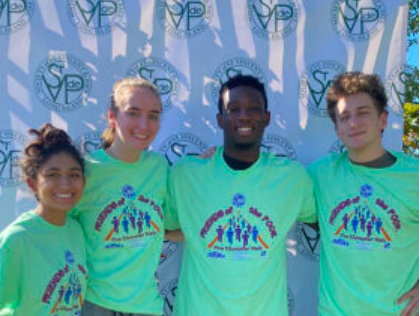 HEIGHT OF OUTLOOK – Raphael Civil, a third-year student at St. John’s University, only recently knew about Black Catholic History Month, but has become a quick student.

After learning about the topic, Civil stepped in to help school administrators organize the campus celebration.

â€œPersonally, I didn’t realize it was an important thing until I was told about it,â€ he said. â€œBut now I see how important it is and why we should celebrate it. Blacks have had an impact on the church. I think it’s important to just make people aware.

Black Catholic History Month, celebrated across the country each November, was launched by the United States National Back Catholic Clergy Caucus in 1990.

The SJU commemoration, conducted virtually due to COVID-19 precautions, took place on Thursday, November 18 at 1:20 p.m.

The celebration included prayers and discussions about the accomplishments of black Catholics and their role in the advancement of the church.

One of Civil’s tasks that day was to introduce keynote speaker Dr Shannen Dee Williams, Associate Professor of History at the University of Dayton and author of the forthcoming book “Subversive Habits: Black Catholic Nuns in the Long African American Freedom Struggle “.

Civil is working to raise awareness on campus about Black Catholic History Month and Black Catholic history in general – not just for this year, but for the future in the hope that more students will seek out information , as he did.

For example, students may be interested to know that there are many black saints in the Catholic Church, he said.

According to CollegeFactual.com, black students make up 14.2% of the undergraduate population at SJU. White students are the largest segment, at 42.1%.

â€œNumber one, it is important for us as a Catholic institution which within the framework of its mission is an anti-racist institution. This is important from the perspective of the core values â€‹â€‹of this institution, which speaks of love, opportunity, service, excellence and truth, â€said McKenzie. “And one last, which is respect – respect for everyone who was here and respect for the diverse campus environment that we have,”

Civil, from Maryland, said he didn’t feel like a minority at SJU.

â€œIt’s a fairly diverse campus. I never felt discriminated against. I have a lot of friends from different backgrounds and different races. That’s how we grow up, when we see different people come together.

He is majoring in health services and plans to pursue a master’s degree in public health.

Civil’s student leadership roles include the position of vice-president of the university chapter of the Society of Saint-Vincent-de-Paul. Chapter members visit homeless people on the streets to deliver food, clothing and blankets.

â€œI want to have a place at the table when the institutions make decisions,â€ he said.

Civil is also a member of SJU’s Catholic Scholars Program, in which recipients receive $ 5,000 per year for each of their years in college and regularly meet with campus ministers for prayer sessions, lectures, and retreats. .

â€œWhen we talk about our Catholic faith, it’s not just about prayer,â€ he said. â€œIt’s what you do outside of the church that really defines who you are. “