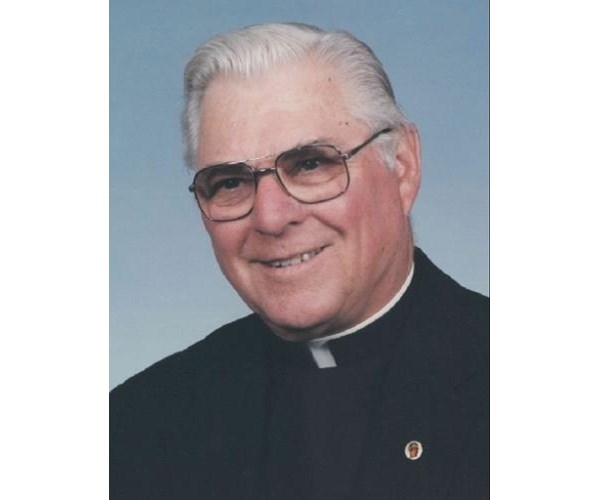 Reverend Andrew P. Marinak, 92, of Charleston, SC and formerly of Little River, SC and Steelton, passed away on Sunday, September 19, 2021 at Carter Assisted Living, Charleston, SC. The father was ordained a priest for the Roman Catholic Diocese of Harrisburg on May 26, 1956 after graduating from Pontifical College Josephinum, Worthington, OH. He was a parish church in St. Vincent, Hanover from 1956 to 1958; Saint Joan of Arc, Hershey 1958-62; Chaplain of the American Penitentiary, Lewisburg 1962-69; Director St. Joseph, Milton 1968-69. He was appointed pastor at Holy Cross, Mt. Carmel 1969-70; Seven Sorrows of the Blessed Virgin Mary, Middletown 1970-77; Corpus Christi, Chambersburg 1977-85; St. James, Steelton, 1985-95; and Sacred Heart of Jesus, Cornwall 1995 until his retirement in 2003. The father was the son of the late Andrew P. Marinak and Josephine Gustin Marinak. He is survived by two brothers, Charles A. Marinak of Edgewater, FL and Robert J. Marinak and his wife, Rose of Ocala, FL; two sisters. Mary Ann Muretic of Oberlin and Josephine A. Malovic of Fairfax Station, VA; and many nieces and nephews. The father was predeceased by two brothers, Edward and James Marinak, and two sisters, Frances Donato and Rita Salembeni. The Transfer Mass will be celebrated on Tuesday, September 28, 2021 at 7:00 p.m. at the Prince of Peace-Assumption of the Blessed Virgin Mary Roman Catholic Church, 815 S. Second St., Steelton with Rev. Jonathan P. Sawicki as Celebrant. A visit will take place after mass until 9:00 p.m. in the church. The Christian Burial Mass will be concelebrated on Wednesday, September 29, 2021 at 1:00 p.m. in the Prince of Peace-Assumption of the Blessed Virgin Mary Roman Catholic Church with Most Reverend Ronald W. Gainer, DD, JCL, Bishop of Harrisburg, as main celebrant. Reverend Robert A. Yohe, Jr. will be the homilist. Interment will be in the cemetery of the circle of priests of the Holy Cross. A second visit will take place Wednesday from 11:30 am to 12:45 pm in the church. Arrangements are handled by Wiedeman Funeral Home & Cremation Services, Oberlin. The funeral mass will be broadcast live on https://boxcast.tv/view/funeral-mass-for-father-andrew-p-marinak-59464 In lieu of flowers, memorial contributions can be made in the form of keepsakes Mass in the name of the father. www.pennlive.com/obits

The Church in Poland and the protection of minors: from the reckless to the informed