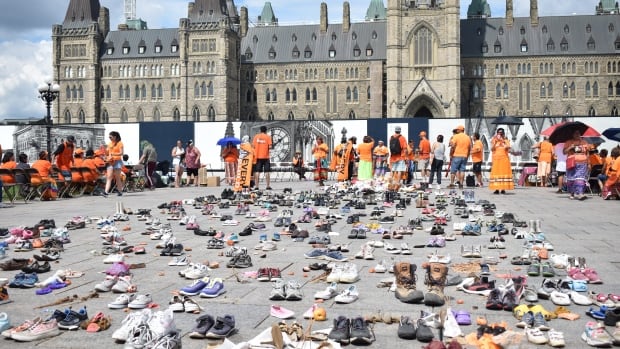 In the fall of 2015, a member of the federal government decided to drop a multi-million dollar residential school compensation case against Catholic Church groups.

CBC News recently contacted over a dozen current and former ministers and senior officials. No one will say who gave the order, although several admit that they likely have relevant information and documents that they refuse to share.

This includes both the current Minister of Crown-Indigenous Relations, Marc Miller, and Bernard Valcourt, who served as Minister of Indigenous Affairs and Northern Development in the Conservative government from February 2013 until his defeat in the federal election. October 2015, won by the Liberals.

Miller’s communications director, Renelle Arsenault, wrote in an email that a document requested by CBC News would not be provided because “it’s secret.” When asked to elaborate, she did not respond. Miller refused repeated maintenance requests.

Valcourt, reached this week by phone from his New Brunswick home, was asked to provide his notes or emails from that period, but he declined.

Defenders say survivors, their families and the public have an immediate right to this information. They say this is the latest slap in the face to survivors by the federal government, the courts and the Catholic Church.

“Everyone covers their butt. You have a conspiracy to silence most white men. It’s so disappointing,” said Tom McMahon, former general counsel for the Truth and Reconciliation Commission.

â€œSurvivors have a right to know what happened and exactly why it happened – and why their voices are not being heard,â€ she said.

The first promise was to provide $ 29 million in cash, but this was broken after millions of dollars were spent on lawyers, administration and other unapproved expenses.

The second was to do our best to fundraise $ 25 million nationwide. Less than $ 4 million was collected during a period when Catholic authorities spent more than $ 300 million on projects to build churches and cathedrals.

WATCH | Requests to the Catholic Church to pay a settlement before the papal visit:

Residential school survivors and advocates say they want the Catholic Church to pay the remaining amount it owes survivors under a 2005 settlement agreement. It is estimated to be around $ 60 million. dollars, which is also what a possible Pope’s visit could cost Canada. 2:03

The third was to provide $ 25 million in â€œin-kind servicesâ€ to survivors. CBC News obtained the list of services and survivors say most of the money provided was for inappropriate colonial church services such as Bible study classes or sending priests and nuns to preach in indigenous communities.

In July 2015, the Catholic Church requested a buyout. The federal government refused and the case went to court. Saskatchewan Court of Queen’s Bench Judge Neil Gabrielson has approved the proposal to buy out Catholics under $ 2 million.

The federal government appealed the ruling, saying Gabrielson had made “palpable and overriding errors in his assessment of the facts.” Ottawa then asked that the July decision be overturned.

But for some reason, someone from the federal government decided to drop the appeal. The case was then closed.

The former vice-minister denies having made a decision

In October, CBC News asked officials at the Department of Crown-Indigenous Relations for an explanation. In an email, they said the decision to drop the appeal was made by the deputy minister when he called himself the Department of Indigenous Affairs and Northern Development.

But speaking publicly for the first time to CBC News, this former deputy, Colleen Swords, denied making the decision.

In an interview, Swords said it appeared the decision to drop the appeal was made during the “transition period” after the 2015 federal election. Stephen Harper’s Conservative government had just lost the election to the Liberals of Justin Trudeau.

Valcourt and other ministers remain responsible until the installation of the new cabinet. But during this period of transition, bureaucrats and ministers “have generally exercised restraint whenever possible” out of deference to the new regime, Swords said.

That’s why she doesn’t know why the appeal was dropped at that time.

â€œI guess it was considered importantâ€¦ It would have been major,â€ she said. â€œThey wouldn’t do that. Not if they could wait.

Lori Turnbull, Principal of the School of Public Administration at Dalhousie University, agreed. She said no major decisions should be made during the transition period.

Swords suggested contacting Andrew Saranchuk, the then Assistant Deputy Minister who was in charge of the residential schools file. Saranchuk is now a senior Justice Ministry official, but an official said he would not be available for an interview.

The church says it has fulfilled its obligations

After CBC News informed Crown-Indigenous Relations that Swords denied any involvement, they released an amended statement. The statement now generally points to “the Harper government”.

CBC News then requested an interview with Peter MacKay, who was Harper’s justice minister at the time.

“I just got this. What can I do for you?” MacKay responded by email.

A detailed explanation and questions were then sent to MacKay, but he did not respond. David Lametti, the current Minister of Justice, also declined a request for an interview.

As for Valcourt, he says he respects Swords.

“You can trust him. He’s a very straight person,” he said.

But while Valcourt has said he likely has emails and documents relevant to the appeal, he’s not interested in reliving those events.

â€œI’m afraid I can’t help you on this point. I’ve decided never to interfere or comment on the past,â€ he said.

Jonathan Lesarge, public and public relations adviser to the Canadian Conference of Catholic Bishops, said his officials dealt with the minister, deputy minister and assistant deputy minister over the compensation case during the period. relevant, but it is not known who made the precise decision to abandon the appeal.

Lesarge added that the bishops are “confident” that they have fulfilled all obligations under the compensation agreement.

Meanwhile, McMahon and White say these denials, shifting stories, and conflicting narratives are not acceptable. They say the 150,000 residential school survivors and their descendants are once again traumatized by the lingering secrecy and that someone must be held accountable.