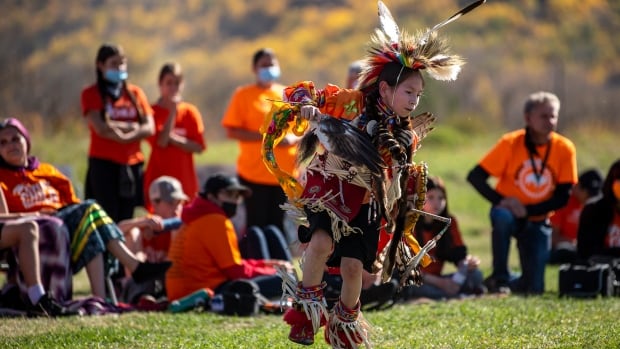 Carol Lavallee spent Thursday afternoon at the site of the former Indian Residential School in Marieval, Saskatchewan, listening to members of the Cowessess First Nation sing, dance and pray.

Over 60 years ago, she would have been inside the now demolished school, looking out the window and dreaming of freedom.

Lavallee was forced to attend school at the age of six and remained there from 1957 to 1967.

Speaking at a ceremony to mark Canada’s first Truth and Reconciliation Day, she said she had to agree to return to where the school once stood.

â€œThe land is sacred to indigenous peoples. I can’t say this land was sacred because I suffered here, â€Lavallee said. “Horrible things have happened to me here.”

She said the Catholic Church applied the Ten Commandments to students.

“You will not steal – and here they stole everything from us. Our minds, our parents. Everything that was precious to us, they stole from us,” LavallÃ©e said.

In June, the First Nation announced the preliminary discovery of 751 unmarked graves in a cemetery near the old school, which operated from 1899 to 1997.

Not all of them belonged to children. Parishioners of the Catholic Church were reportedly buried there, as well as members of neighboring communities.

‘It is being validated’

The First Nation worked with historical records from the Roman Catholic Church, the RCMP, and Indigenous and Northern Affairs Canada to put names on the anonymous graves.

But the healing journey doesn’t end there, he added.

WATCH | Indigenous perspectives to learn in the classroom:

Over the years, increased efforts have been made to teach young Canadian students about Indigenous peoples and the truth about Indian Residential Schools. Ontario is a province that plans to require courses on Indigenous Peoples for Grades 1 to 3 students starting in September 2023. 2:05

“Knowing that there used to be windows behind us where our family members watched and that they shouldn’t be able to sing, dance or pray – we do.”

Lavallee said she was happy the residential school was gone and that she is spending her time helping other survivors.

She is not a survivor, says Lavallee, but a victor.

“Because they haven’t killed enough in me. I still love. I always help. I always share.”

Door-to-Door Ministry Introduced Many People to the Catholic Church