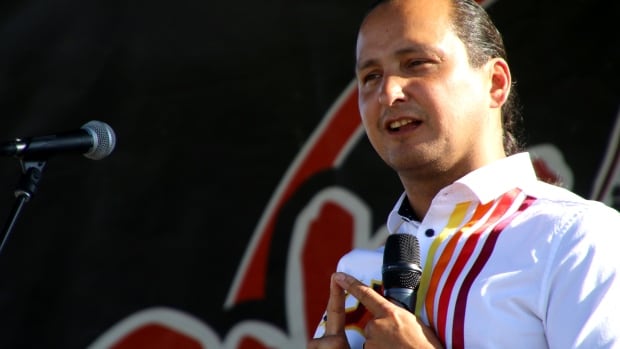 When asked how 2021 has unfolded for him and the people of the Cowessess First Nation, Chief Cadmus Delorme described it as a roller coaster of emotions.

Sitting with CBC’s Sam Maciag, Delorme recapped an eventful year for himself and for the people of his country.

This interview has been edited for length and clarity.

Q: The pandemic has really been the headline of 2021 for everyone. How did your First Nation manage until 2021 when it goes through the pandemic and protects each other?

A: We didn’t receive our first case of COVID in the community until 2021. Throughout 2020, we were no active cases. After the New Years we had our first case, which we then increased to almost 20, which caused panic at first.

We thought we were ready, but mentally, emotionally, we weren’t. Everyone is confined, we thought it was the end. And then we brought it down to zero. Since then we have fluctuated and it has come back to zero. Like now, today [Dec. 12] we have zero cases. Last week we had 12 so it’s tiring. It becomes a norm.

But the biggest challenge is that we are gatherers. We’re community people who get together and have food, laughs, get-togethers, so trying to do everything on Zoom now is becoming the norm. Getting to know the homes of our elders when you look at them on the screen, telling an Elder “you have to wear your shirt …”

It adapts to technology, while maintaining the cohesion of our community.

Q: In July, Cowessess claimed her inherent right to care for her own children, she signed an agreement with the federal and provincial governments. Take me back to that day, what did that signing look like to you?

A: I woke up nervous, excited nervousâ€¦ Prime Minister [Justin Trudeau] called me personally and it was a Saturday. I was camping with my family in Cypress Hills.

He said, “Chief, I want to come to Cowessess on Tuesday to sign the coronation agreement with you and your nation.” I was like, cool, Prime Minister, can you come on Thursday? Because we were camping until Wednesday. As Prime Minister, he declared: â€œMy communications [team] will get back to you, I don’t know what my schedule looks like.

The communications came back and said “Chief he can only come on Tuesday”, and I was like yes, I know, I just wanted to ask him if he could, so I said yesâ€¦ It was literally four days before.

I then called the Prime Minister Premier Scott Moe and said to the Prime Minister, please can you come to Cowessess on Tuesdayâ€¦ it’s like I told you we were hanging out by your side, so let’s do something, that’s all.

From there, the Prime Minister’s entire team showed up the next day and we were sitting in exactly that room, planning. I said as Cowesses we are preparing it.

So the day of … we went to [powwow] arbor. This afternoon in the arbor is a day that I will cherish for a long time. I actually watched the CPAC Youtube video a week ago, just to remind myself how beautiful it was, you know.

The laughter, the native humor, the native dance, the native drum, the pride of Cowessess and the fact that two leaders of this country come to sit with us and sign a deal, claiming that Cowessess has full control over destiny. of our children and families and that will require investment in intergenerational trauma.

When they left, I really felt a difference in the growth of the survivors of the Marieval residential school who were able to come that day.

Q: You are one of many Indigenous leaders who have been asking the Pope for an apology for some time. What would an apology on Canadian soil mean for residential school survivors, others affected and families?

A: I am not a residential school survivor. I was raised by parents, I am the leader and spokesperson for a community that has had a boarding school for 98 years.

In 2008, and when then Prime Minister Stephen Harper apologized for the role Canada played in administering and funding residential schools in this country, my late father – he didn’t never really showed emotion, never saw him cry, never really saw him show the emotional side – the day he apologized, I saw my dad show his emotions.

That day, I learned that an apology makes a difference. But it’s the action that goes with it. Apologies are recognition, but action is what is needed.

When I used this example before, I led to your main question: Canada did it well in one area, but it did so badly in another area and we need to learn from it. Compensation is required for the pain that individuals have suffered.

Our survivors have obtained their compensation; most of them. Who benefited from it? The economy has benefited. When these survivors spent this money that was rightfully theirs, they returned home and the outbreak continues to this day.

When the Pope comes to Canada … he will have to apologize for the role the Roman Catholic Church has played in the number of residential schools it has administered in this country. This is just the beginning, recognizing the role. Then the church must take action to help the indigenous people of this country reach that level, knowing what we are capable of.

One of the things we need to remember is that the tone starts at the top. The Pope is the top of the church. In this country, some faithful Roman Catholics have told me that they question their own faith because of the history and the reality that they are learning about the truth with the indigenous peoples.

An apology can help this whole country, as Canadians, to strengthen a faith. If an apology comes, it’s recognition of the truth, then reconciliation comes. And I believe the apologies will translate into 50 to 100 years of hard work.

For this relationship between Roman Catholics, Indigenous peoples and Canadians in general, an apology must come.

Don Follis | Picked up for speeding on Advent Sunday | Religion

Member of Parliament: Catholic priest, 2 other detained under the anti-conversion law for “having attracted tribal villagers to Christianity”