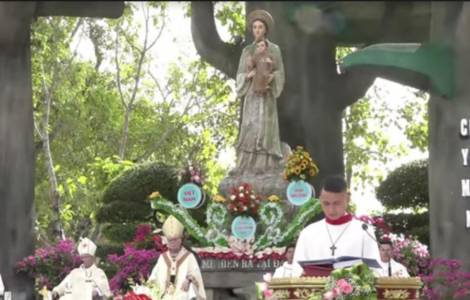 La Vang (Agenzia Fides) – At a time marked by pandemic, poverty, insecurity and uncertainty about the future, the Church of Vietnam renews its act of consecration to the Blessed Virgin of La Vang. Despite all the hardships, many Vietnamese faithful did not want to miss the opportunity to celebrate the Solemnity of the Assumption (August 13-15) at La Vang shrine. In recent years, thousands of Catholic pilgrims from home and abroad have always made the pilgrimage to the shrine and participated in holy masses in a special time of devotion, prayed the rosary, offered dances and flowers to the Virgin who is affectionately called the “Mother of La Vang” by all Vietnamese devotees. This year the celebration was completely different due to the Covid-19 pandemic: there were no large flows of pilgrims and Archbishop Joseph Nguyen Chi Linh of Hue celebrated only one mass in the high altar of the Virgin of La Vang, with only a few concelebrants. priests. The cause of these restrictions was the fourth wave of the pandemic that Vietnam is currently facing. Millions of Vietnamese worshipers inside and outside the country who revere La Vang’s mother watched the solemn mass via the internet and social media as the celebration was broadcast live thanks to the efforts of the media office of the Archdiocese of Hue.
Bishop Joseph Linh expressed his regret, but also his hope: â€œI remember the last mass celebrated on August 15, 2019 by many bishops and thousands of priests from the country and abroad with hundreds of thousands of Vietnamese pilgrims. came from many parts of the world and gathered to pray in the extreme heat of summer in central Vietnam. “He continued:” In the last few weeks we have seen many patients suffering from the disease caused by Covid -19, health workers are exhausted and thousands of migrant workers flee the city of Ho Chi Minh, the epicenter of the pandemic wave. Today each of us is wondering where Blessed Mary is, begging her to look at the miseries of her children and listen to the voices that cry out in Vietnam and in the world.We firmly believe that God blesses those who trust in God and in Blessed Mary, even when desperate because of their difficult circumstances. We do not know God’s plan, but we are sure that he loves his children and that he sacrificed his life on the cross to save our lives. “” In the face of the crisis caused by the pandemic, we must all continue to pray, keep our faith in Almighty God and invoke the Virgin Mary â€, concluded the Archbishop.
La Vang is the largest pilgrimage center dedicated to the Blessed Virgin Mary in Vietnam and Indochina. It is located in Quang Tri Province, about 50 km north of Hue City. It was once a secluded place, covered in dense rainforest, home to many types of wildlife. It is said that in 1798, Blessed Mary appeared in the La Vang jungle to help many local believers who had taken refuge there to escape persecution from the government of the royal center of Hue city. As they suffered, were hungry and thirsty, the fugitives gathered under a large banana tree and confided their sufferings to the Blessed Virgin Mary, reciting the Rosary and praying. Suddenly the Virgin appeared to them and comforted them, showing them the leaves of the nearby bush to cure their illnesses. Before saying goodbye, Our Lady said: “From now on, the prayer of all those who will come here to invoke my name will be answered and he will be blessed”. Since the beginning of the 20th century, Marian feasts and celebrations have taken place at the initiative of the Catholic religious community, and each year many faithful come to venerate Our Lady of La Vang and thank her, in particular by renewing their request for patronage. and the protection of the Vietnamese people and the country, which they reaffirm today in the face of today’s adversity. (AD-PA) (Agenzia Fides, 23/8/2021)

Calendar of religious and religious events – The News Herald