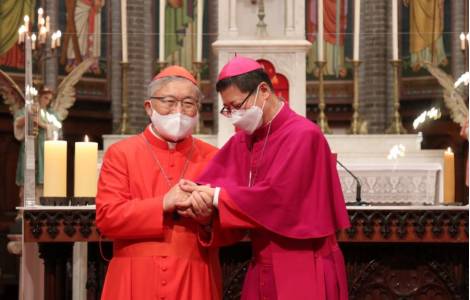 Seoul (Agenzia Fides) – Mgr. Peter Chung Soon-Taick OCD, is the new Archbishop of Seoul and Apostolic Administrator of Pyongyang. The appointment of the Holy See was announced on October 28 by Cardinal Andrew Yeom Soo-jung, currently Archbishop of Seoul, during Mass in Myeong-dong Cathedral, which the Archdiocese of Seoul dedicates on the last Thursday of each months, to the underprivileged, urging the faithful to pay particular attention to the needs of the poorest and most vulnerable segments of the population.
As indicated in a note sent to Agenzia Fides by the Communication Office of the Archdiocese of Seoul, in his homily, Cardinal Yeom welcomed the appointment of Mgr Peter Chung Soon-Taick, currently auxiliary bishop, declaring: â€œI am very grateful for the great gift that the Holy Spirit has sent to our Archdiocese and to the whole Church in Korea. I pray that Bishop Peter Chung will have the grace to be guided by the Holy Spirit during the diocesan synodal process “.
Archbishop Alfred Xuereb, apostolic nuncio in South Korea, in the message read to the faithful, expressed, on behalf of the Holy Father, Pope Francis, “the most sincere congratulations to the new archbishop, assuring him prayers and support and invoking abundant blessings upon him “. Archbishop Chung, Cardinal Yeom, auxiliary bishops, clergy and religious and all the people of God in the Archdiocese of Seoul invoked, during the celebration, the special protection of the Blessed Virgin Mary, Queen of Peace.
Speaking, the new archbishop said: â€œChrist Jesus is beyond the reach of men. We absolutely cannot imagine his plans, because they always far exceed our thoughts. Today, I am full of apprehension. With the help of prayers, I will try to follow in the footsteps of my extraordinary predecessors. The inaugural Mass will be celebrated in Seoul on December 8, 2021, on the solemnity of Mary Immaculate, patron saint of the Church of Korea.
The new archbishop was born on August 5, 1961 in Daegu. He studied chemical engineering at Seoul National University (1980-1984). After graduating, he entered the priestly training seminary of the Catholic University of Korea, Seoul, and entered the Discalced Carmelite Order. He made his final vows in the Discalced Carmelite Order and took a course in biblical theology at the Graduate School of the Catholic University of Korea in 1992. He was ordained a priest on July 16, 1992. I studied Sacred Scripture at the Pontifical Biblical School Institute, in Rome, in 2000-2004. In 2009, he became General Definitor of the Order of Discalced Carmelites in Rome for the Far East and Oceania.
On December 30, 2013, Pope Francis appointed him Auxiliary Bishop of Seoul. In 2014, he became Episcopal Vicar for the Western Region as well as for the Religious and Youth of the Archdiocese of Seoul and then headed the Youth Ministry Commission of the Korean Bishops’ Conference (CBCK). In 2016, he became chairman of the Korea Church History Research Foundation and chairman of the Korea Commission for the Causes of Saints, as well as the Commission for the Exaltation of Korean Martyrs in the Archdiocese of Seoul. Last year he became a member of the Theological Affairs Bureau of the Federation of Asian Bishops’ Conferences (FABC). (AP) (Agenzia Fides, 10/29/2021)

News from the community of the region | News, Sports, Jobs