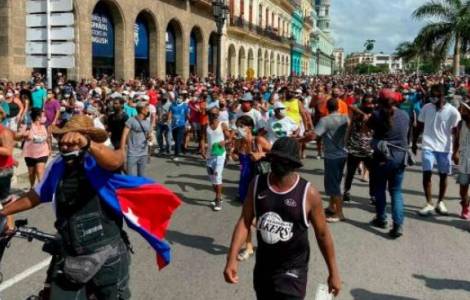 Havana (Agenzia Fides) – Solidarity with the Cuban people due to the difficult social situation they are experiencing continues to be expressed at different levels. Yesterday at the Angelus, Pope Francis, who visited the island twice (2015 and 2016), urged after the Marian prayer: â€œI am also close to the dear Cuban people in these difficult times, especially families who suffer the most. I pray that the Lord will help the nation to build an increasingly just and fraternal society through peace, dialogue and solidarity. I urge all Cubans to entrust themselves to the maternal protection of the Virgin Mary of Charity of Cobre. She will accompany them on this journey. “Peace, dialogue and solidarity are the wishes of many Bishops’ Conferences, dioceses and Catholic groups in Latin America, which express their solidarity with the Cuban people. In Mexico, Desde’s editorial La Fe, a publication of the archdiocese of the capital, informed: â€œThousands of Cubans, from many cities, have taken to the streets to express their dissatisfaction with the terrible economic, social and health situation in Cuba. experience “, we read in the note sent to Agenzia Fides,” the Bishops have recognized the right of the population to raise their voice “. The declaration of the Cuban bishops the day after the demonstrations of Sunday July 11 (see Fides, 7/14/2021) is a strong sign of the tireless presence of the Church which needs our listening, our help and above all our prayer. , emphasizes the editorial. The Cuban people, who are also currently suffering from a virulent Covid-19 infection, without vaccines, without drugs and with collapsed hospitals, should be a call to all Christians around the world, in this situation of chaos, to violence and incitement to division by the same government. For the Spanish religious, many of whom were missionaries in Cuba, â€œthis Church, silent for years, has been able to remain in the hearts of the Cuban people, before whom it has a credibility and a respect that does not exist. in other democratic countries of the so-called First World, in countries with a deeply rooted Catholic tradition, â€reads a comment posted on social networks and sent to Agenzia Fides by the Spanish Vida Religiosa. “Today, the Cuban Church – the text continues – is aware of being the only institution present on the island with the capacity and the moral force to say a word capable of reorienting the dictatorial situation in which its people have lived since then. the mid-twentieth century “.
The Cuban episcopate is aging and tired, three bishops have already resigned for reasons of age but, incomprehensibly, they have not yet been replaced. The average age in the episcopate is close to or greater than 70 years, the youngest is 60 years old. â€œWhile waiting for a renewal with the young Cuban bishops, the Church continues to be a unique presence of hope and reconciliation, in a people broken, wounded, deprived of the most basic food, of all types of medicine, in precarious health and a depressing education system, with a political system where there is no freedom of expression, there is no political pluralism, and where human rights are systematically violated â€. The Archbishop of the Diocese of Santiago de Cuba, Mgr. Dionisio GarcÃ­a called yesterday in his Sunday homily that the existing disputes on the island be resolved by peaceful means and “never with violence and intolerance”. “The bishops in the midst of the difficulties, the protests, the demonstrations of these days, the prisoners, the repressions, want to pray for all Cubans, everywhere in Cuba”, declared Mgr. GarcÃ­a during his first mass celebrated after the anti-government protests that rocked several towns on the island a week ago. At the National Sanctuary of the Virgen de la Caridad del Cobre, â€œPatroness of Cubaâ€, today’s demands are â€œabove all so that there is no violence, so that the logical differences that exist in each countries are resolved through dialogue, mercy and forgiveness. , never with violence and intolerance “.
The Archbishop of Santiago stressed that the Catholic hierarchy of the Caribbean country has invoked the need to bring “changes that give hope and confidence to our people, who need to feel respected whenever they want to express their way. to feel and see our realities “. He also spoke of changes that help Cubans “plan for a better future and personal good for their families, for the benefit of the nation”. Bishop GarcÃ­a, member of the Standing Committee of the Conference of Catholic Bishops of Cuba (COCC), also prayed that in the midst of the current health crisis due to the Covid-19 pandemic, patients and the doctors who treat them can to do it under the best conditions necessary, and for the responsibility of each one in this situation. The Sunday July 11 protests, the strongest recorded in Cuba in the last sixty years, occurred with the country plunged into a serious economic and health situation, with the increase in Covid infections, in addition to a serious food and medicine shortage, internet service shutdown and even power cuts.
So far, the protests have left one dead, several injured and more than 100 arrests. (EC) (Agenzia Fides, 7/19/2021)