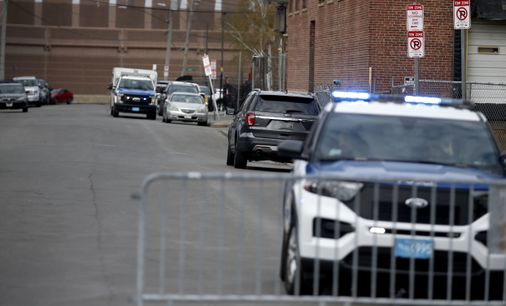 After series of stabbings at Mass and Cass, authorities clear Atkinson Street and shut down engagement center

For months, if not years, Atkinson Street was the heart of Mass. and Cass. Even months after the city cleared the area of ​​homeless encampments, dozens of people still gathered daily on the sidewalks of Atkinson to seek, sell and use hard drugs.

But on Thursday, the sidewalks of Atkinson Street were empty. A single police car was idling with its blue lights flashing in the middle of the street. A fence closed the entrance to the center. Above the entrance, a message read: “All are welcome.”

The midfielder usually seen on Atkinson Street appeared to move one street to Bradston Street, where dozens of people injected drugs into their veins and fell asleep on Thursday afternoon.

“They’re pushing us from block to block, like it’s going to (expletively) change anything,” said a man who identified himself only as David, who has been homeless for a decade and is out jail for the last time in March.

Closure of the center, even temporarily, is a barrier to accessing resources, he said.

“For me, it’s one bad thing after another,” David said as he cobbled together a bike on the side of Bradston Street. “I’m one bad decision away from death.”

The Engagement Center building, which opened in December, provides a day-care space for people struggling with addiction and homelessness, offering food, shelter, clothing, resources treatment and access to medical care, according to city officials. Recovery specialists are there to help those in need, officials said.

A spokesperson for Mayor Michelle Wu’s office said Thursday that public safety concerns require that Atkinson and the engagement center be closed “for a few days”.

“Outreach teams will continue to work in the area to provide services to those in need,” the spokesperson said in a statement. “We will continue to offer transportation to day service centers in Boston.”

After the city cleared the area of ​​tents in January, authorities referred dozens of people to housing and treatment services. But some advocates argue that more needs to be done to help those in need in the region.

Jim Stewart, founding member and board member of SIFMA Now!, a group that advocates for safe drug use sites in the state, said in a statement that “Depriving people of the service they need in response to the actions of the few (in such a broad and indiscriminate way) is what armies of occupation do.

“This is not a public health or community policing response,” he said. “Every time they’ve done this, it disrupts everything, support systems, harm reduction between clients, puts people in the surrounding communities at risk.”

The first stabbing in the latest wave of street violence in the area occurred shortly after 5.20pm on Sunday in Southampton Street. The victim, who was stabbed in the leg, told police the dispute that prompted the stabbing was more than $30, according to a police report.

The following day, there were at least two stab wounds in or around the engagement center, according to police reports. In one of the incidents, a witness told police that a suspect, later identified as John Hammersly, walked out of the engagement center with a knife. He was arrested and charged with assault and battery with a dangerous weapon and possession of fentanyl.

According to a police report, there was another stabbing this afternoon at the engagement center, but no further information was available.

The next day, Tuesday, brought more bloodshed to the area. Just before 9 a.m., the police found a stabbed shirtless man covered in blood staring at a wound in his abdomen in what officers described as shock. Police followed a trail of blood down Topeka Street and a block down Southampton Street.

That same morning, around 9:40 a.m., police responded to a report of a stabbing on Massachusetts Avenue. A friend of the victim walked into Victoria’s Diner and asked staff to call the police. Staff told investigators the stabbings took place on the platform at Newmarket station.

On Thursday, the closures of Atkinson Street and the Engagement Center sparked a mix of apathy, acceptance and outrage from those who call the streets of Mass home. and Cass.

A homeless man, Sohayb Dougad, said he would support the city clearing all Mass streets. and Cass of the Homeless and advocated for the widespread legalization of drugs. He said he was battling a crack addiction. As he spoke, a few feet away from him, a friend flicked a syringe filled with a brownish liquid before plunging it into his forearm.

“People have no respect,” Dougad said of the recent violence. “That’s why it’s closed, it’s closed.”

Another man who only gave K-Ruler a street moniker said that for city leaders, it comes down to a simple question when it comes to Mass and Cass.

“What are you going to do with people? He asked.