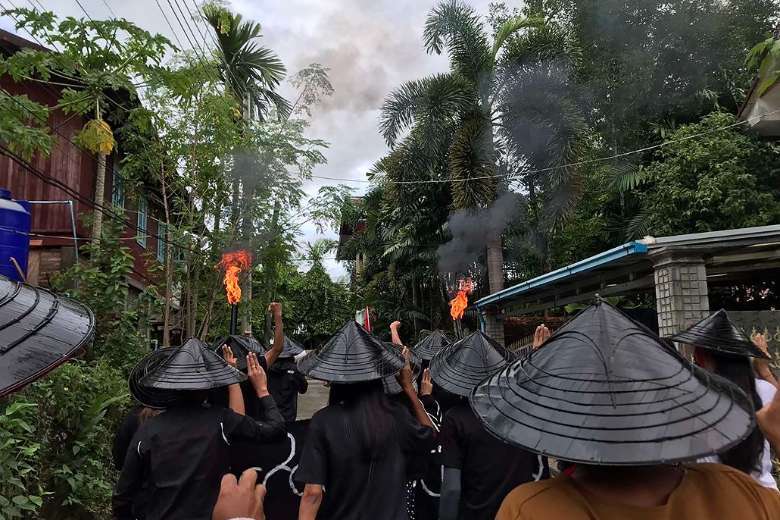 A special Marian prayer for peace in Myanmar

Protesters brandish flaming torches during a demonstration against the military coup in Dawei on June 28. (Photo: Dawei Watch / AFP)

The recitation of the Rosary in Italian and Burmese will be at the Marian prayer service to be held at the International Missionary Animation Center (CIAM) in Rome at 4:40 p.m. local time on June 29, according to the Vatican Fides agency.

The representatives of the PMS, the staff of the Congregation for the Evangelization of Peoples and the members of the Association of Priests and Religious of Myanmar in Rome who in recent months have sensitized the international community to the tragic situation in Myanmar will be among the participants.

Archbishop Marco Tin Win of Mandalay will join the online Marian prayer service as a representative of the Church in Myanmar.

The invitation to join the program was also extended to the bishops and priests of Myanmar as well as to the national directors of PMS in various countries.

There will be a time of sharing on the life of faith and the evangelizing mission of the Church in Myanmar at the conclusion of the prayer.

“We follow the tragic situation in Myanmar every day and want to express our spiritual closeness and solidarity with the suffering nation. In this spirit and in full communion with Pope Francis, who has spoken of Myanmar on several occasions in his appeals, we want to unite spiritually with the Church in the nation in conflict, ”said Father Anh Nhue Nguyen, Secretary General of the Pontifical Church. Missionary union.

“We wish to invite all Catholic communities, in Italy and abroad, to join in Marian prayer, at the same time, in spiritual communion. It is a way of being a church in movement and of emphasizing the urgency of peace in Myanmar, on the feast of the Holy Apostles Peter and Paul to whom we entrust ourselves by invoking their special intercession.

Pope Francis, joined by Catholic bishops and various Christian churches from around the world, expressed his solidarity with the people of Myanmar and prayed for peace and reconciliation in this country affected by violence since the coup d’état of the 1st February.

The Southeast Asian nation, which had tasted relative freedom during a 10-year experiment with democracy, fell into chaos after the return to military dictatorship following the overthrow of the elected civilian government.

The army’s brutal crackdown on anti-coup protesters resulted in the deaths of nearly 900 people, including at least 55 children.

Local armed resistance groups have sprung up in various parts of the country, leading to an escalation of fighting and the displacement of thousands of people in Karen, Kayah, Chin, Kachin and Shan states – predominantly Christian regions. .––ucanews.com